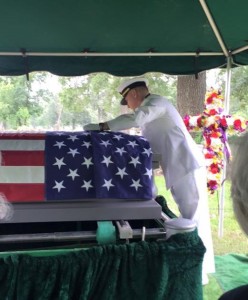 We arrive at my Dad’s graveside service and park behind the hearse. Even though we had asked for an honor guard, the sailor and Naval officer standing watch over his flag-draped coffin surprise me. While we welcome family and friends they face each other with unflinching gazes–all dress whites, gold buttons, epaulets and gloves.

The Guard’s gravity gradually pulls us into its orbit. In perfect synchronization they tuck under the ends of the flag. About a hundred feet away a sailor lifts his bugle and begins to play. The sailor and officer posted at the casket offer a slow-motion, final salute. 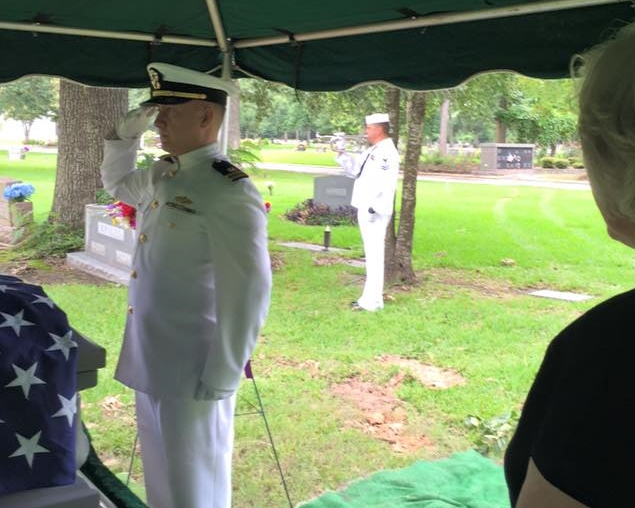 Somehow Taps captures the groan of a soul wrenched by death. Those five mournful notes drift out over the cemetery like a covering of honor, settling not just over my Dad, but every soldier buried there, especially the section of plain white crosses. We take so much for granted. Taps calls us to remember, and give thanks.

It also calls forth our tears–the anthem of a fallen world. 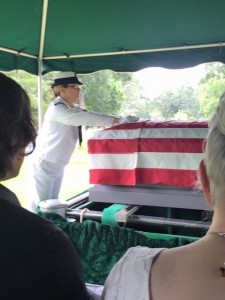 The sailor on the left end of Dad’s coffin folds the ends of the flag into a triangle. She continues the triangle folding until the entire length of the flag is enfolded into the original triangle. The stars are uppermost, to remind us, “In God we Trust.” 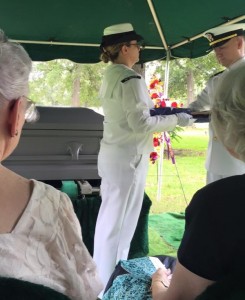 She embraces the triangle close to her heart, squeezes it three times, compacting it, then hands it to her senior officer for inspection. The officer then lowers himself onto one knee in front of my mother and looks full in her face: “On behalf of the President of the United States, the United States Navy and a grateful nation, please accept this flag as a symbol of our appreciation for your loved one’s honorable and faithful service.”

He removes his glove and offers his hand first to Mom, then Zach, then me. “My condolences on your loss.”

Mom and I are taken aback. It’s so personal. The ceremony brings the full sovereign power and majesty of the United States of America into the wounded hearts of our little family. The vast, impersonal government becomes humbly present to the intimate sorrow of losing a husband, a father, a grandfather. Every slow, deliberate motion, every note, every word infuses our graveside gathering with something so scarce in today’s culture.

We are so casual.
We dress in jeans. We salt our language with slang. We prefer what’s cool to what is dignified.
We are so egalitarian.
We want to look each other in the eye, rather than look up in humility and honor.

We choose intimacy over reverence.
I understand the historical and cultural reasons why. And I appreciate our freedoms as well as my neighbors.
I also understand that God created us for intimacy. He delights in it. In the person of Jesus Christ, he became Emmanuel, God with us. Weeping over death. Moving in and making his home with us.

Still, I suspect the pendulum has swung a little too far.

“Make sacred garments for your brother Aaron,” God told Moses, “to give him dignity and honor” (Ex 28:2). God knows that when our lives touch eternity we resonate with symbols that invoke his majesty.

We are made for worship of the High King of Heaven. The One seated beneath the seraphs, whose train fills the temple. He has created metaphors and rituals so that we might taste the transcendence of a holy and righteous sovereign. When Zach walked into St. Paul’s Cathedral in London, his gaze swept up to the vaulted dome. So did his thoughts. “You walk in here and everything says, ‘It’s not about you.”

Since God created the institutions of family, church and state, I suspect that his transcendence naturally flows into them, so that a wedding, a worship service, an honor guard can lift us up to “gates of splendor.” Maybe that’s part of why they can touch our hearts so easily and tears can flow.

The Navy Honor Guard reminds me to occasionally break out of my casual world. Listen to the symphony play the 1812 Overture with real cannons. Ride the narrow gage railroad up Pike’s Peak. Watch the waves crash on the rocks. Read the poetry of the Psalms or sing a hymn.

My Dad loved pipe organ music so much that he bought a big Hammond organ, paid for my lessons and promised me a whopping $3.50 if I would learn to play his favorite hymn. Two days after his funeral, on Father’s Day, my Mom and I stand beside his grave and sing it.

…Let goods and kindred go, This mortal life also.
The body they may kill. God’s truth abideth still.
His Kingdom is forever.

If it had been a movie, the heavenly pipe organ would have swelled and the credits would have rolled.

But it was just my Mom and me singing out over the raw earth and fading flowers, closing the cover on the book of Dad’s life. 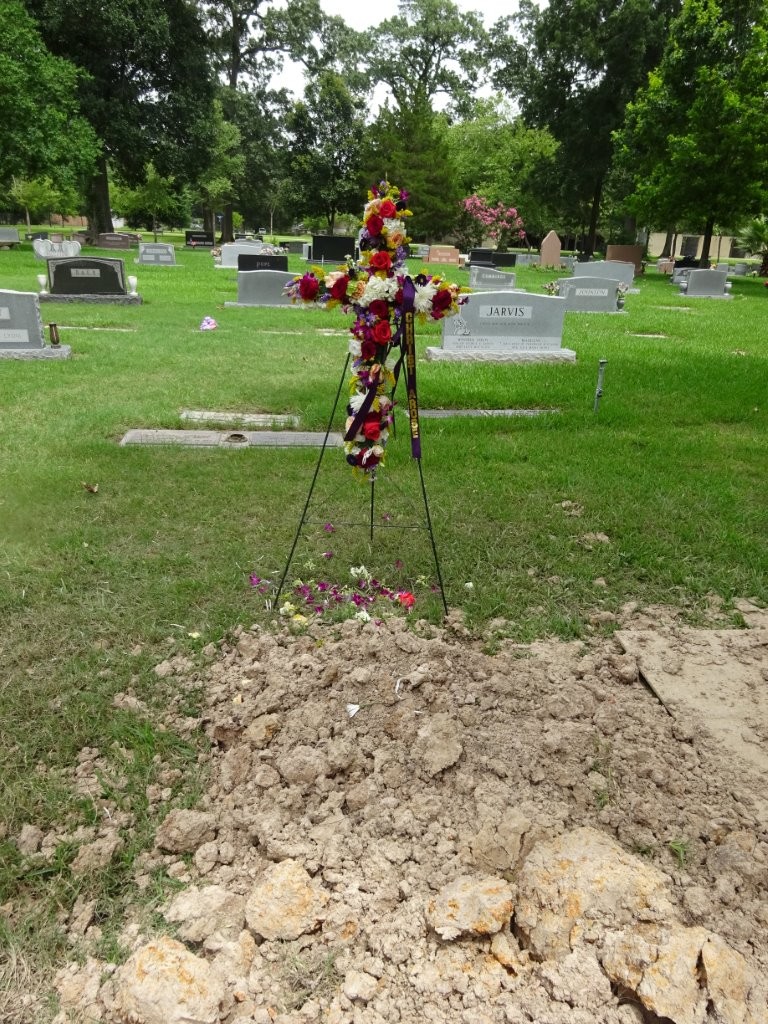 If you’d like to see pictures from the rest of Dad’s funeral please visit this special page, “Saying Good-bye to my Dad.”

4 thoughts on “Surprised by Majesty: How a Navy Honor Guard reveals what’s missing in our casual lives”