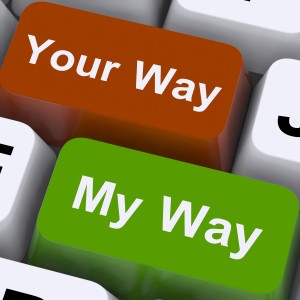 How do you respond when people frustrate you? When their vision is smaller, their personalities grate, their pride annoys, their fears quash progress? Our culture nurtures a critical spirit. Social media affords more opportunities (and reinforcement) to vent and complain than ever.

German pastor Dietrich Bonhoeffer knew how to speak truth to people in the wrong and how to give grace when the relational issue was more a matter of personality or preference. As the Lutheran Church of Martin Luther fell under the spell of Adolph Hitler, he boldly joined the dissenting “Confessing Church,” becoming one of Hitler’s earliest and staunchest critics. (In Part 2 of this post I’ll review Bonhoeffer’s challenge, “When Politicians Fail Us.”)

But first, the personal challenge. Bonhoeffer’s commitment to speaking truth was tempered by great love. In his book, Life Together, he challenges our Western penchant for radical individualism, even (especially) in the church, and shows us, better than anyone I’ve ever read, how to forbear others who offend and try our patience. How to see and honor the image of God in each person.

If we want to quiet our critical spirit and live in Christian community, we always approach others, Bonhoeffer writes, through the person and love of Christ. Jesus stands between me and my brother or sister. “I must release the other person from every attempt of mine to regulate, coerce and dominate him with my love.

“Spiritual love…knows that the most direct way to others is always through prayer to Christ….” We take our frustrations with others to God first and ask him to expose the idols of control in our own hearts.

Later on in a section entitled “The Ministry of Holding One’s Tongue” Bonhoeffer expands on the idea. As we learn to yield our tongues and critical thoughts to the Lord Jesus enables us to “cease from constantly scrutinizing the other person, judging him, condemning him, putting him in his particular place…now [we] can allow the brother to exist as a completely free person, as God made him to be. [Our] view expands, and…[we] sees, shining above [our] brethren, God’s creative glory.”

“God did not make this person as I would have made him. He did not give him to me as a brother to dominate and control, but in order that I might find above him the Creator…God does not will that I should fashion the other person according to the image that seems good to me; rather in his very freedom from me God made this person in his image. I can never know beforehand how God’s image should appear in others (italics mine).”

Finally, in a section on “The Ministry of Bearing” Bonhoeffer shows how this means more than showing sympathy, or even empathy. He concludes that it is precisely this freedom of others that is a burden to us as it collides with our bent to have our own way and control others.

How do we bear with our sisters and brothers? We let God create his image in the other person. And we willingly bear the burden of his or her freedom. “The freedom of the other person includes all that we mean by a person’s nature, individuality, endowment. It also includes his weaknesses and oddities, which are such a trial to our patience, everything that produces frictions, conflicts and collisions among us.” To bear with our sister or brother means “involvement with the created reality of the other, to accept and affirm it, and in bearing with it, to break through to the point where we take joy in it.”

We do this, he says, because we see how the Lord Jesus bears with us. The burden of our freedom was so heavy that He had to endure the cross. “God took men upon himself and they weighted him to the ground. But God remained with them and they with God.” Our ability to enjoy unbroken fellowship with God and one another was secured by the power that raised Jesus from the dead.

My friend Katherine did not like the way her worship leader led in worship. She continually noticed his irritating tone of voice. (He sounds so canned.) He kept choosing these tuneless, downbeat songs. He was so uninspiring. She pulled back from full engagement in worship. She criticized him to her family and friends.

God began to convict her of the very points that Bonhoeffer is making. Who was she to determine what God’s image should look like in this man? Who was she to want to bind this man to her preferences? She confessed her desire for control and began to pray for her worship leader—that God’s image would be fulfilled in his life as God intended; not as she intended. That God would bless him as a brother in Christ, a father, a worship leader.

Slowly she began to be aware that she was not noticing all the mannerisms and style issues that used to annoy her so much. She found herself wanting to connect  relationally with him. She began to appreciate worship more, engaging more with God and less with her worship leader.

Now she has “broken through” as Bonhoeffer put it, so that she takes real joy in worship and her worship leader.

This is the hard but transforming work of loving God and others, spoken first and foremost to myself because I need to keep this vision of forbearance fresh and clear. I need the continual reminder.

With heartfelt gratitude to Bonhoeffer, who often came off as “imperious and demanding,” but who also purposed to think deeply about this and submit himself to the truth and practice of God’s Word. Good words from a fellow traveler.

Ephesians 4:1-3 I therefore, a prisoner for the Lord, urge you to walk in a manner worthy of the calling to which you have been called, with all humility and gentleness, with patience, bearing with one another in love, eager to maintain the unity of the Spirit in the bond of peace.

More good words in Part 2 of this post: When Politicians Fail Us: A Bonhoeffer Alternative to Doublespeak and Cunning…What You Can Do

How do you respond to friends and family who frustrate you? How might Bonhoffer’s insight help? Respond in the comments below…

8 thoughts on “When Friends Frustrate Us: A Bonhoeffer alternative to criticizing or withdrawing”