Undeterred by the 40° weather, we stand in front of the South Carolina capitol, thousands of us, joining Franklin Graham to pray for our nation. It’s the fifth stop on his Decision America Tour to all fifty capitols. 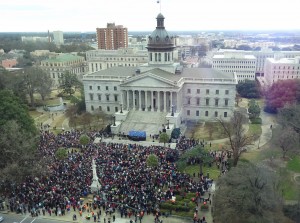 No other speakers. No political endorsements. The only piece of campaign literature I see is underfoot. 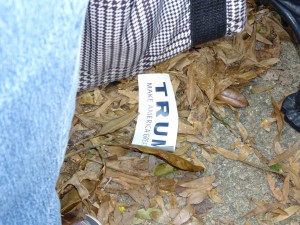 The head of Samaritan’s Purse relief agency and the son of Billy Graham says, “I don’t have any hope for the Democratic Party.” And as Republicans begin to high-five each other he continues, “I don’t have any hope for the Republican Party. Or the Tea Party. Or any party. I don’t see any hope in this country outside of almighty God,” Rev. Graham said. “Our society is unraveling. It’s coming apart.” 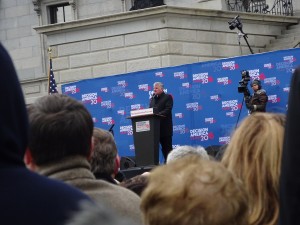 Ah…we are so divided. Fighting with words instead of bullets. Weary of fighting. Yet unwilling to fade into apathy. So, like Nehemiah, we pray.

Then the challenge: a pledge. Franklin asked us if we would…

…pledge to honor God at home—by living biblical principles, striving for purity in or out of marriage, and pursuing godliness in all my relationships.

…pledge to honor God in public—by standing for biblical principles and serving those in need.

…pledge to honor God with my vote—supporting, where possible, candidates who will uphold biblical principles, including the sanctity of life and the sacredness of marriage.” 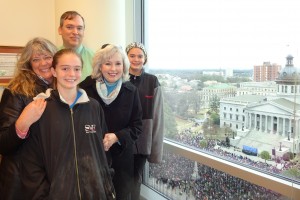 Looking down on the rally from a friend’s office. Thanks Byron and Donna.

And here my frustrations surge. I think about the DVD on the counter at home sent to South Carolina pastors and wives. The candidate strongly names the name of Jesus. He invites Jack and me to watch him talk with over 100 pastors and faith leaders “about how his Christian faith has shaped his worldview.”

He will share his testimony and show “how his Christian beliefs and principles will guide him as President.”

This is the same candidate of whom The Stream reported, “Between 2005 and 2010 [his] charitable giving totaled 0.9 percent of his adjusted gross income.”

In this year of outrage at politics as usual, disgust with a lack of integrity in Washington, I read that and my first reaction was, How is this not just another politician talking the talk and not walking the walk?

On Thursdays at my church we are studying how God’s Word speaks to political issues. Of all the politically oriented issues God cares about the most, care of the poor ranks high. But his urging to care for the poor isn’t aimed at governments, it’s addressed to individuals.

“If you pour yourself out for the hungry and satisfy the desire of the afflicted, then shall your light rise in the darkness” (Isaiah 58:10).
“If a brother or sister is poorly clothed and lacking in daily food, and one of you says to them, “Go in peace, be warmed and filled,” without giving them the things needed for the body, what good is that?” (James 2:15-16).

I wish all the candidates “standing for Biblical truth” were “willing to live it” in this regard. And supporting generously the ministry of their church and God’s Kingdom. Several of the candidates are not making public that information. Either they are not sharing their tax returns at all, or not the “charitable giving” part. But all the candidates who have shared except one give in the less than 1-3% range except Carly Fiorina who gave 12-15%.

Where are candidates who are being transparent about their finances? Living with integrity? I don’t believe 10% is a magic number. But given the money they make, where is the heart of generosity? Jerry Falwell Jr. has told many stories of Trump’s generosity, but The Stream references an article that puts numbers out there. Low, low numbers.

So yes, I’m frustrated. Then I remember how, as a young single, I was not “living it” in terms of giving generously either.

Thank God he doesn’t love us on a performance basis. He is so patient and shows us grace after grace. I’m still not looking like the rising light in Isa 58, but I’m much closer than I used to be. He who begins his good work in us will keep working to bring it to completion. That is what I pray for our leaders. For myself.

Still, giving to the poor matters in terms of shaping public policy. Our president will have great influence on how our government helps the poor. I hope we can elect someone who will craft policy that requires responsibility yet shows an authentic generosity and sensitivity to their needs.

The Presidential primary election now comes to South Carolina. The second part of Franklin Graham’s pledge challenges us to…

…pledge to pray fervently and faithfully for America.

…pledge to be registered and to vote in every election—local, state, and federal—supporting, where possible, candidates who uphold biblical principles.

…pledge to engage in my community with God’s truth and prayerfully consider running for office. 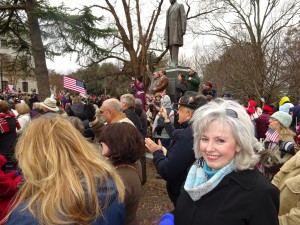 Interestingly, Graham doesn’t actually ask us to pray for these things in front of the capitol like we prayed for forgiveness. He asks us to do that on our own. Form community groups that will do it together. Our Thursday group will have some additional things to pray for.

After the rally my friends and I head to Donna’s husband’s office across the street. Over a Mellow Mushroom pizza we discuss the complexities of caring for the poor in the beautiful boardroom of one of Columbia’s downtown banks. (A most ironic lunch. Thanks, B). 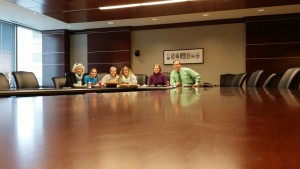 If God’s urging to care for the poor isn’t aimed at nations, but individuals, what is a nation’s duty? If a majority of people in a democracy want to give to the poor through their taxes, should those who don’t want to be compelled to give? Does that strip the virtue out of giving to the poor? If we want to give some benefits to the poor does the issue become a matter of degree rather than principle? How might a fair degree of benefits be determined? Keeping in mind that socialism as a system has a poor track record of liberty and disincentives to work.

There are no easy answers. Only fallen people who pray for God, who knows hearts, to raise up the wisest and most gifted candidates to lead us. Who lean on God’s wisdom for their own vote.

I challenge you to pray too. If not exactly these concerns, then pray for yours. With others. Throughout the months ahead.

Graham plans to visit all 50 state capitols. You can watch his message in Columbia here. 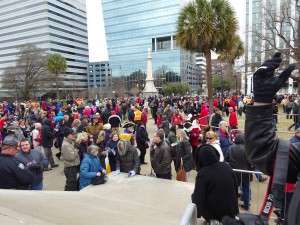 4 thoughts on “Praying for America with Franklin Graham in SC: Frustrated but Hopeful”