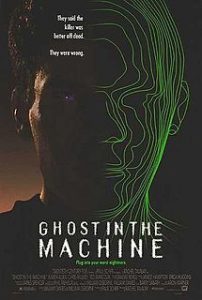 It’s the story new research is pointing to, but that Science won’t admit. We all have this self inside our heads. We see images, remember memories, hear music and an inner voice. We speak in an inner voice. We silently pray. We perceive things and feel an emotional response long before we can put it into thoughts or words.

Is all of this merely the result of neurons firing and chemicals washing? Or is it the universally shared experience of being a living soul?

Our schools and culture are saturated with the message that, “The scientific and philosophical consensus is that there is no nonphysical soul or ego, or at least no evidence for that.”

The brain is a computer. We may sense a self — a “ghost inside the machine.” But, according to Big Science, it’s all just data processing.

The New York Times reports, “’The machine mistakenly thinks it has magic inside it,’ says Dr. Michael Graziano, a neuroscientist at Princeton. And it calls the magic consciousness. It’s not the existence of this inner voice he finds mysterious. ‘The phenomenon to explain,’ he said, ‘is why the brain, as a machine, insists it has this property that is nonphysical.’”

This idea that we are an organic machine has huge implications for our daily lives.  Must we live as neurotransmitters, simply responding to the programming of our genes or perceptions or emotions? What is the real story Science is telling about its search for consciousness—the magic in the machine?

While Big Science is saying that “the brain is a computer” new thinking is challenging that conclusion. Think about it…how do you get a picture of your wedding day or the track of your favorite song stashed into a neuron? 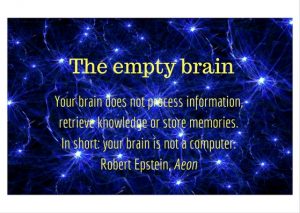 Research psychologist Robert Epstein writes in Aeon that “…computers really do operate on symbolic representations of the world. They really store and retrieve. They really process. They really have physical memories. They really are guided in everything they do, without exception, by algorithms. Humans, on the other hand, do not – never did, never will.”

Scientists cannot even locate a place in your brain that is the seat of consciousness, the “command and control center.” Nor can they locate a memory storage area. On an MRI your brain can light up all over when you are thinking, feeling and remembering.

Epstein continues, “A wealth of brain studies tells us, in fact, that multiple and sometimes large areas of the brain are often involved in even the most mundane memory tasks. When strong emotions are involved, millions of neurons can become more active. In a 2016 study of survivors of a plane crash by the University of Toronto neuropsychologist Brian Levine and others, recalling the crash increased neural activity in [many different parts of the brain].” Where is the “self” in this scenario?

If the brain is the interface with the immaterial soul where these thoughts and images and feelings actually reside, then this research is not nearly as confounding. Just because the visual cortex lights up when we remember a plane crash does not provide proof positive that visual memories are somehow encoded there. Correspondence of use is not the same thing as the source of the memory.

Other research points to the existence of the soul: Some people who are blind show a capability for “blindsight”—they can pick out objects by their color without the conscious sensation of color. They can navigate down a corridor strewn with obstacles because they can somehow sense the presence of the obstacles, even though they can’t see them.

This aligns with the testimony of people who have had near-death experiences, patients who have flatlined, whose souls have detached from their bodies, but they can still see without eyes and hear without ears. They can hear conversations in a hospital room or see the red tennis shoe on the hospital roof when they would have had no opportunity to see it before they died/detached.

Another line of evidence that points to the soul: The research of Benjamin Libet shows that the conscious feeling of willing an act actually occurs after the brain [soul] process that brings about the act — a result replicated and refined hundreds of times since the original discovery in the 1980s.

As David Brooks reports in The Social Animal, we find the same fantastically integrated rapid response in the act of perceiving. Perceiving isn’t just the action of our eyes taking in a scene. Seeing and evaluating are not two separate processes. They are linked and basically simultaneous. We see something and immediately evaluate it and wrap it into an emotional response.

Researchers have found that “evaluative feelings, even on complicated issues like euthanasia, can be detected within 200 to 250 milliseconds after a statement is read. You don’t have to think about disgust, or shame, or embarrassment, or whether you should blush or not. It just happens.” The automatic nature of this action that happens without thought or reasoning also points to the reality of the soul.

Perception is where the action is. It’s where the image of God and our conscience have programmed evaluations and desires like our Father’s into our souls—desires for love, goodness, fairness, loyalty—desires corrupted by the fall—our “flesh.” Desires that spring from our souls well before any rational response kicks in.

The instruction from God’s Word and the example of others also sinks down into our souls, as well as what we learn from experience, especially experiences with other people. Research shows that the greatest determiners of perception come from our relationships with others, especially our families while we’re growing up. No doubt our relationship with God as well. 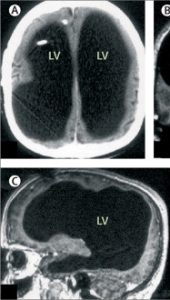 Another line of evidence for the soul: If our brains drive the machine, how can people live without the vast majority of their brains? The Lancet journal documents the case of a French civil servant, age 44, who manages to live a fairly normal, healthy life despite missing 90 percent of his brain. A history of neonatal hydrocephalus has steadily liquefied his brain until only a thin shell remains (picture at left). Yet he is married, has two children and holds down a white collar job.

We continually read about the frustration of scientists trying to account for a physical source of human consciousness and brain activity and coming up with results that align with what God tells us instead….

We are embodied souls.

And the LORD God formed man of the dust of the ground, and breathed into his nostrils the breath of life; and man became a living soul (Gen 1:28 KJV).
And as [Rachel’s] soul was departing (for she was dying), she called [her baby’s] name Ben-oni (Gen 35:18).
From Jesus: And do not fear those who kill the body but cannot kill the soul. Rather fear him who can destroy both soul and body in hell (Mat 10:28).

This is a great mystery. The deepest, truest you—your perceptions, your mind, your heart, your will–is your soul. Not your brain. Not your body. Your soul is eternal while your body is wasting away. When you die it will depart your body and you will live as a naked soul until you receive your immortal, eternal body at the resurrection (2 Cor 5:2-4)

The truth of being an embodied soul rather than “the ghost in the machine” gives us so many benefits. Here are just a few: First, the great power of agency: Our genes do not make us do it. Nor simply our perceptions or feelings. Again and again Scripture charges us with the expectation that we can choose. Choose love. You have moral agency with tremendous consequences. “I have set before you life and death, blessing and curse. Therefore choose life, that you and your offspring may live, loving the LORD your God…for he is your life…(Deut. 30:19-20).

If we are souls made in the image of God then we have an anchor—the calling and ability to know and seek the good, the true and the beautiful in a darkening world.

In the face of abuse, oppression, injustice, abortion and euthanasia, being an image-bearing soul also gives us an anchor for human dignity.

Which brings us to this final benefit: Being an image-bearing, eternal soul means that we are made to transcend this material existence. We are made to wonder and be awestruck by the beauty of a meteor shower in the night sky. A chorus of voices singing Bach (or the Beach Boys), soaring in harmony and counterpoint.

Best of all, we are made to delight in and worship a good and beautiful God who transcends even the night sky and soul-moving music. Who created the sky and music so that they would show us his glory and draw us to his heart.

Even in the midst of our own suffering and despair, we can take great comfort in knowing we are image-bearing souls, able to enjoy an intimate relationship with the God of the Universe, knowing we have great dignity because we are like God, and he has set his love on us.

“By day the LORD commands his steadfast love, and at night his song is with me, a prayer to the God of my life…Why are you cast down, O my soul, and why are you in turmoil within me? Hope in God; for I shall again praise him, my salvation and my God” (Psalm 42:8, 11).

2 thoughts on “The story Science is telling: You Are a Living Soul (and the difference it makes)”