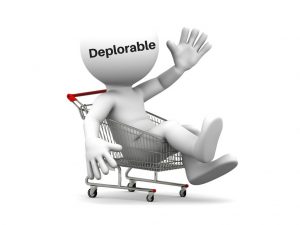 As anyone who has read this blog knows, I’ve not been a big fan of Donald Trump. So I guess I don’t officially qualify for his “basket of deplorables.” Then why did I feel personally scorned by Hillary’s remark at an LBGT fundraiser last Friday?

To just be grossly generalistic, you could put half of Trump’s supporters into what I call the basket of deplorables. Right? The racist, sexist, homophobic, xenophobic, Islamaphobic — you name it.

Because, as a conservative Christian with a high view of God’s Word, I have seen all of those labels but one (racist) aimed at people who believe exactly as I do.

If, like me, you believe in …
… a traditional view of marriage and family,
… a wise welcome for immigrants,
… or taking the gospel of Jesus Christ to Muslims…

then in today’s culture, don’t be surprised if you wind up in the “Basket of Deplorables.”

Hillary did apologize. But only for getting the numbers wrong. Maybe it’s not “half.”

I would love to have heard her say …

“I’m sorry for using all the “-phobic” labels. I know you’re not really afraid of LGBT’s or immigrants or Muslims.

“I read the stories of you embracing Syrian refugees, helping them acquire household goods and learn English, even while you stand for tighter immigration.

“I know that you befriend your gay neighbors, loan them your yard tools, invite them over for dinner and take them food when they’re sick, even when you might not celebrate their weddings.

“It’s just easier to paint you with a broad brush rather than acknowledge that, because you follow Jesus, you treat these people with kindness, even though you disagree with them.

“I’m sorry I spoke with such contempt. When I watched the video, I saw such arrogance and scorn on my face. Heard the mocking tone in my voice. Saw the dismissive wave of my hand. Here was this room full of well-heeled LGBT supporters who loved laughing at you and I led them in heaping derision on you. I know that must have hurt.

“I’m sorry I called you ‘deplorable.’ You are not ‘wretched’ or ‘worthy of censure.’

“I’m sorry I pictured you in a ‘basket’ that invoked the image of being ‘basket cases.’

“I’m sorry I called you ‘irredeemable.’ Because we know God can redeem anyone. Even the apostle Paul, who was so prejudiced against Christians that he imprisoned them, and had them tortured and murdered.”

I wonder if Hillary has any clue how she looked and sounded to millions of Christians who are being laughed at, not because of what we do, but what we believe, based on God’s Word. Maybe not. She has promised to use the power of government to change “deep seated cultural codes [and] religious beliefs” that stand in opposition to abortion and other liberal issues.

I hope that piling contempt on those beliefs is not just a prelude to what she has in mind if she is elected.

As for us “Deplorables,” we’ll continue to love our neighbors, help refugees, respond to everyone with “gentleness and respect.”  Maybe we’ll even wear a “Deplorables” T-shirt. Suddenly they’re everywhere.

How do you respond to Hillary’s comments? Please respond in the comments below…

5 thoughts on “Notes on Hillary’s Basket”