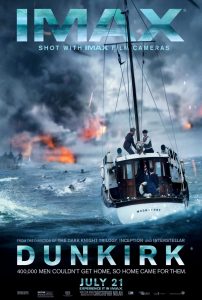 Yesterday evening we went to see Chris Nolan’s new film, Dunkirk, where the British and French armies were forced to pull back to the beaches in the face of Hitler’s army.  The movie powerfully shows the terror of 338,ooo men pinned down on the beach waiting and trying to evacuate to England across the channel. Overhead the Luftwaffe bombed the hospital ships and destroyers loaded with men and strafed those still on the beach or in the water.

But the movie leaves out much of the larger story. Right when they had the Allies in their tank sites, the German army halted their advance for three days.  They believed the Allies were doomed and they took the liberty to consolidate their position. A British officer cabled home a curious message that signified nothing to the Germans, but dire distress to the British populace who were familiar with the King James Version of the Bible: “But if not…”

The message quoted Shadrach, Meshach and Abednego as they faced the furnace of the Babylonian king (Daniel 3:17-18: “Our God whom we serve is able to deliver us from the fiery furnace, and he will deliver us out of thine hand, O king. But if not, let it be known unto thee, O king, that we will not serve thy gods, nor worship the golden image which thou hast set up.”

The troops faced a fiery ordeal. They needed a miracle.

Inspired in large part by that Biblical quote,  hundreds  of ordinary shop keepers and businessmen  crossed the channel in their fishing trawlers and pleasure boats and braved the Luftwaffe to bring all 138,000 safely to Britain.

The story of Dunkirk raises significant questions:  How should we look on our vocation in wartime? The same as in peacetime?

In his book War Is a Force That Gives Life Meaning, cynical war correspondent Chris Hedges tries to persuade his readers that war is fought because of “myths” people believe. To those who “swallow the myth” that their cause is righteous and the enemy is evil and vicious, “life is transformed.”

“The collective glorification (of war) permits people to abandon their usual preoccupation with the petty concerns of daily life. They can abandon even self-preservation in the desire to see themselves as players in a momentous historical drama. This vision is accepted even in the face of self-annihilation. Life in wartime becomes theatre. All are actors.”

“The world, as we see it in wartime, becomes high drama. It is romanticized. A moral purpose is infused into the trivial and commonplace. And we, who yesterday felt maligned, alienated, and ignored, are part of a nation of self-appointed agents of the divine will.”

You can hear Hedges’s sarcastic edge as he pictures the deluded people that believe the myth. But as a man who has seen more than his share of body parts, terrified children, and hidden mass graves, he makes some deeply true observations. Think North Korea and Kim Jong Un.

When people see life through the lens of war, it changes…everything. Especially when it is a just war.  The Allied cause was righteous and Hitler was vicious. That kind of war inspires ordinary people to jump in their boats and cross the channel in the face of great danger.

When you are asked to think about life as war, how do you respond?

Life is war? Yes, I believe that.  No, I didn’t. We live what we truly believe. In my younger life I tended to believe that life was a stage, not a battlefield. If you go tap dancing across a battlefield, you’re likely to get your head blown off (which maybe explains a few things).

If I and if you truly believe life is war, then, just as Hedges tells it, we will abandon our “usual preoccupation with the petty concerns of daily life.” We will “abandon even self-preservation” in the desire to see ourselves as “players in a momentous historical drama.” That is what people did at Dunkirk.

Some of us are war cynics like Hedges–spiritual warfare cynics. Not because we’ve seen too much of war like Hedges has, but maybe because we haven’t seen enough of it. Should we truly imagine life as war? Can we believe it?

What if we are not “self-appointed agents of the divine will” but God-chosen agents appointed to fight for our hearts and the hearts of others? What if we are called to abandon our “usual preoccupation with the petty concerns of daily life”? Take great risks? What if God wants to infuse his purpose into the “trivial and commonplace”—our errand list and our phone conversations? Is that being “romantic” or real?

We can live our days, as John Eldredge describes it, “as if we have landed on the beaches of Normandy in the early hours of D-day, June 6, 1944, with a lawn chair and a book to read. We are that unprepared for our lives.”

Jesus described his purpose in terms of conflict over high stakes marked by intensity and great risk—the very essence of war.  I have come…

…to bring conflict! Fire upon the earth! Not peace, but a sword, turning family members against one another. (Matt 10:34)

…to proclaim freedom for prisoners and sight for the blind. (Luke 4:18)

Jesus came to take sides and light fires, to fight for the hearts and lives of people who need him. To show us, in the bright fires of conflict, what a breathtaking treasure he is. It is realism that is prepared to endure extreme pain, loss, and no visible results—whatever it takes—to invite everyone into the fulfillment of all our deepest romantic dreams.

We can pour our passion into chasing our visions of the small story we want to write with our lives, but what happens when we find our dreams, land a career? Then what? We find the love of our life, buy a home, and start a family. Then what?

Whether we settle for less or chase small good-life dreams, life becomes boring because so little is at stake. No tension or struggle to pursue higher hopes or dreams: no story = boredom.

Real Life with vision, passion, and intensity flows from seeing how Jesus lived and imagining what is at stake. Satan has engaged God in a battle for our hearts, and the stakes of the choices we make in our everyday lives  are even higher than Dunkirk, because bodies and souls hang in the balance. 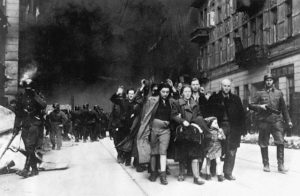 Hedges is right. War can infuse meaning into life. It can also challenge meaning. Two weeks after  Germany invaded Poland and Britain declared war, on October 22, 1939,  C.S. Lewis preached a sermon  in Oxford where he served on the faculty: “Learning in Wartime.”

He answered that “every vocation, if offered to God, is accepted.” But our primary calling is to engage in the highest stakes battle of all.

6 thoughts on “Dunkirk: The movie…and our calling”