Just returned from Oxford where part of the delight was seeing where C. S. Lewis lived, worked and loved. In spite of his superior skills in reasoning, writing and history, Lewis struggled to gain entrance to the great Oxford University. He was pitiful at math.

The central Oxford landmark, The Radcliffe Camera (left, 1749, part of the Bodleian Library), and All Souls College (right).

All his life he would struggle simply to make change. Oxford entrance exams required a certain mathematic proficiency. He flunked.  He was cramming to retake the entrance exam when he was called up and sent on to the trenches of WWI. In an extraordinary stroke of providence, when he returned, he fell under an examination exemption given to soldiers, and went on to distinguish himself at Oxford. 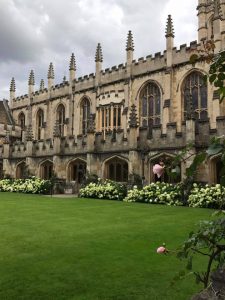 During his 30 years at Oxford, Lewis gathered with other scholars who loved mythopoeic literature, including J.R.R. Tolkien (Lord of the Rings). The group became The Inklings and enjoyed meeting at local pubs to read each others’ manuscripts and enjoy a pint. 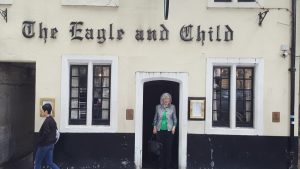 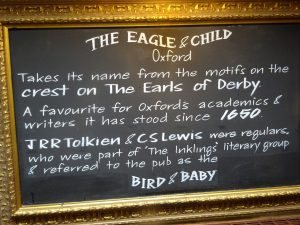 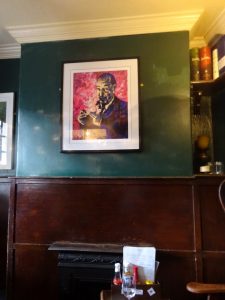 Lewis’s portrait hangs in one room while Tolkien’s hangs in another.

Lewis once wrote, “My happiest hours are spent with three or four old friends in old clothes, tramping together and putting up in small pubs…talking nonsense, poetry, theology, metaphysics over beer, tea and pipes. There’s no sound I like better than adult male laughter.”

While at Oxford Lewis delivered several famous sermons at the University Church of St. Mary the Virgin, including “The Weight of Glory” and “Learning in Wartime.” 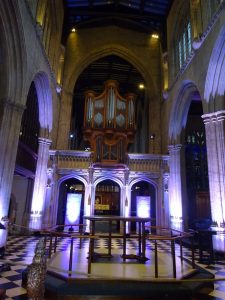 From this pulpit he challenged his audience, “We are half-hearted creatures, fooling about with drink and sex and ambition when infinite joy is offered us, like an ignorant child who wants to go on making mud pies in a slum because he cannot imagine what is meant by the offer of a holiday at the sea.” 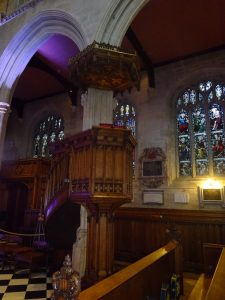 But this was not his parish church. Once Lewis turned from atheism to theism, he began regularly attending the Anglican parish church near his home, The Church of the Holy Spirit in Headington. Some months later he came to faith in Christ and continued worshiping here until his death. 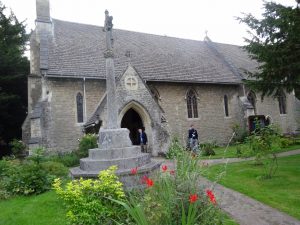 It was actually after a late-night ramble down Addison’s Walk with Tolkien and Hugo Dyson that Lewis finally came to the conclusion that, “…this Christian story is to be approached as I approach the other myths…it is the most important and full of meaning. I am also nearly certain that it really happened.”

The inheritance of his father’s estate enabled the purchase of The Kilns residence on eight acres of wooded land in Headington, a few miles from Oxford, where Lewis “tramped” daily. The residence is now owned by the C.S. Lewis Foundation which hosts a Scholars in Residence program and frequent tours. 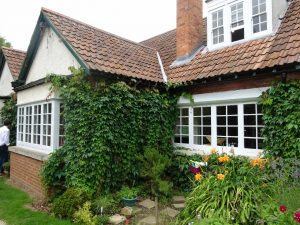 One of the interesting features is this outside staircase, used by Lewis to reach his bedroom even in the bitterest winters. The inside door was only accessible through another bedroom which remained locked. 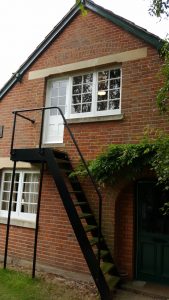 A writing desk downstairs where Lewis hand-wrote many of his manuscripts and letters with nub and ink. 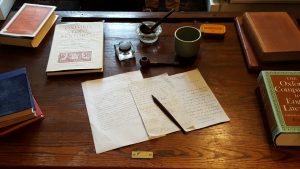 Lewis kept a punt on this pond and enjoyed swimming here. To the left he and his brother Warnie constructed a bomb shelter anticipating attacks that never came. Hitler fully expected to conquer Britain and ordered the Luftwaffe to spare Oxford as he planned to establish his British capital there. 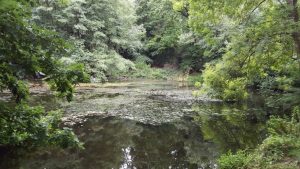 And while Lewis published highly acclaimed books about Medieval and Renaissance English Literature, his academic specialty, he also wrote books about Christian apologetics, allegory, science fiction, mythology, and fairy tales. And not only that, books that became wildly successful. (By 2000 some estimates put his sales at 200 million books in 30 languages.)

According to Justin Phillips, (Lewis and the BBC) Chuck Colson has argued that it was critical to get Lewis away from the academic snobbery, naturalistic bias and infighting at Oxford. Cambridge created a chair in Medieval and Renaissance Literature at Magdalene College, and Lewis was smart enough to take it, avoiding the “continual ground war” at Oxford. He taught at Cambridge for nine years. 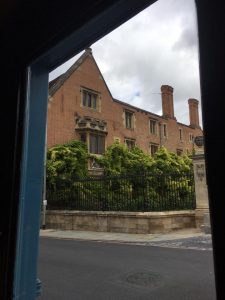 Lewis died November 22, 1963, the same day as JFK. He is buried in his parish church’s cemetery with his brother Warnie. (His wife, Joy Davidman, was cremated, according to her wishes.) The slab stone to the left marks their grave. 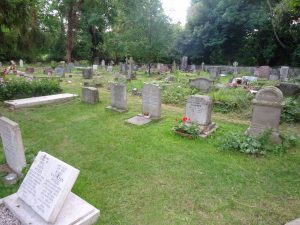 Lewis, who died first, is on bottom. His brother was interred above him. The inscription, chosen by Warnie, reads, “Men must endure their going hence,” a quote from the Shakespearean calendar hanging in their mother’s room when she died. The brothers were children at the time. 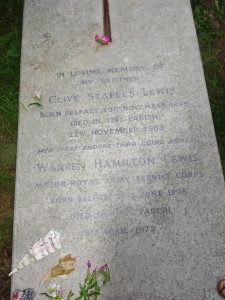 On a plaque near where Joy Davidman Lewis’s ashes were scattered, Lewis offered the following tribute, words that serve as a banner over his life as well:

“Here the whole world (stars, water, air,
And field, and forest, as they were
Reflected in a single mind)
Like cast off clothes was left behind
In ashes, yet with hopes that she,
Re-born from holy poverty,
In lenten lands, hereafter may
Resume them on her Easter Day.”

2 thoughts on “A Window on the World of C.S. Lewis”