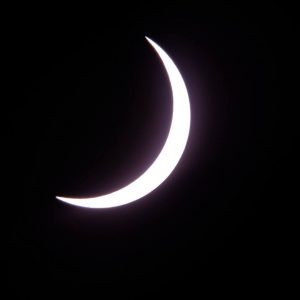 Ours is truly a privileged planet. That’s what I was thinking Monday as the moon slid over the sun here in Columbia, South Carolina. Could it just be a co-incidence that…

…the moon and sun are both perfect circles? (Some moons are shaped more like a potato)

…the moon is 400 times smaller than the sun, but that is perfectly offset by the fact it is 400x’s closer to Earth?

“For thus says the LORD, who created the heavens (he is God!), who formed the earth and made it (he established it; he did not create it empty, he formed it to be inhabited!): “I am the LORD, and there is no other,” (Isaiah 45:18).

I was thinking, He formed it so that we would have a front row seat to see his glory on display like this.

Guillermo Gonzalez, an astrophysicist we interviewed for our radio program and co-author of the book Privileged Planet, said he studied all 65 moons in our solar system.

Turns out we live on the best planet with the best moon for viewing eclipses. We also have the best platform for studying the sun during an eclipse.

Because the moon fits so perfectly over the sun, astronomers have been able to study the sun’s atmosphere. Discover how the sun’s light is produced. Figure out its structure. And as a result, crack the entire field of astrophysics. (In this photo Carlos captured the pinkish arc of the sun’s chromosphere, the part of the sun’s atmosphere just above the surface, that suddenly “turns on” in totality, “as if,” my friend Sue Bohlin says, “an unseen hand flips a switch.”) 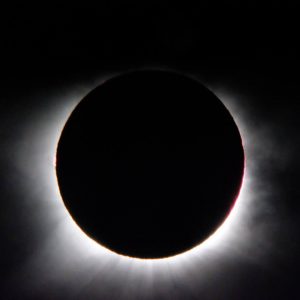 But that’s not all. Watching starlight be bent by the sun’s great mass is only possible during a total eclipse. And that is what helped scientists in 1919 prove Einstein’s theory of relativity. That, in turn, opened up the entire field of cosmology. Had we not been privileged to view such perfect eclipses, these discoveries probably would not have been made.

Watching God’s “eternal power and divine attributes” on display like this, I felt like we were having a close encounter with the holiness, the otherness, of God.

We watched the eclipse on Lake Murray in our friends’ boat. The light became so weird, as Annie Dillard described it in an Atlantic essay, “I turned back to the sun. It was going. The sun was going, and the world was wrong. The grasses were wrong; they were platinum. Their every detail of stem, head, and blade shone lightless and artificially distinct as an art photographer’s platinum print. This color has never been seen on Earth. The hues were metallic; their finish was matte.” Exactly. 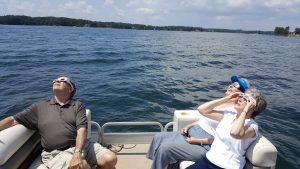 with John and Carolyn Davidson

The soft twilight that usually bathes us from the horizon reflects in from the area just beyond the moon’s shadow, creating bizarre shadows on us. At 2:43 pm it looks like this. (It’s amazing how light things still are when the sun is almost totally hidden. Even though the light looks “platinum” weird.) 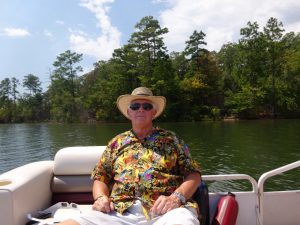 Then at 2:46, three minutes later, the moon’s full shadow overtakes us. No more sunlight and shadow edges. All shadows. Actually, given Jack’s Calypso Louie shirt, this was kind of a relief. 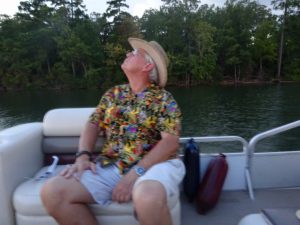 On shore the security lights blink on. The cicadas rev up and the frogs join in. We heard that at the zoo the zebras laid down and the big cats headed for their enclosures. Overhead the moon casts its shadow upon us. But the sunshine beyond the moon’s shadow reflects back on the lake. It is 2:47. 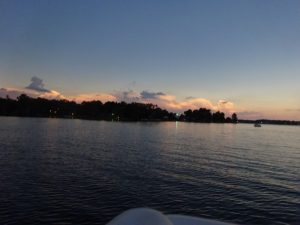 My favorite panorama shot: the USC Gamecocks football team watches the eclipse with their videographer from the top row of Brice Stadium. On game days the team usually makes their entrance into the stadium to Strauss’s opening fanfare in the movie 2001, “Thus Spake Zarathustra.” Here the fanfare plays in the background as the moon’s shadow sweeps over Columbia and the team cheers for an “entrance” much greater than their own.

It is the same way on the lake, when totality begins, we snap off our glasses and spontaneously begin to cheer, along with those in the boats around us. We cheer again when the sun reappears at the end of totality. There are really no words. No pictures do it justice.  “And God said, “Let there be lights in the expanse of the heavens to separate the day from the night. And let them be for signs and for seasons, and for days and years.” Genesis 1:14  It’s like stepping into Europe’s great Gothic cathedrals two weeks ago. We can’t help but worship something so far beyond the measure of a man. Such a breathtaking sign of brilliant design. 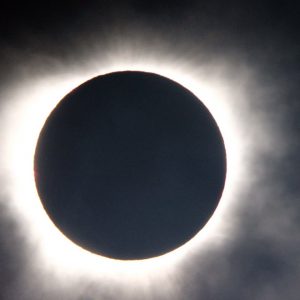 Our neighbors, Warren, Mary, Kendall and kids watched in their driveway. They captured the shadow bands on video! “It happens when the moon is just about to completely cover the sun,” Mary writes, “and there’s just a little sliver of light left. It looks like a bunch of shadowy snakes moving on the ground. We put a white bed sheet out to see it better, but the video really doesn’t do it justice.” No one knows what causes them. 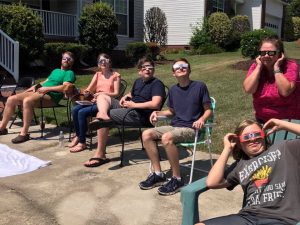 I nominate Warren and Mary as most handsome couple in eclipse glasses. 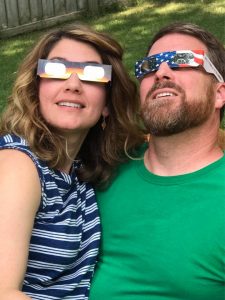 And Ella and Isaac Harvell as cutest kids 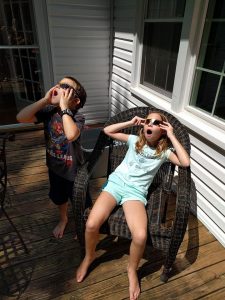 The Lawson and Iglesias families watched through Ruth’s telescope, the scope that gave us the remarkable pictures posted above. “I took these,” Carlos said, “on a little Fuji X100F through Ruth‘s Orion SkyQuest XT8 Dodsonian telescope with her 28mm eye piece. And a sun filter, of course. I pulled the filter off during totality.” 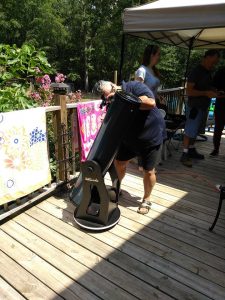 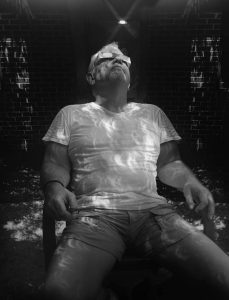 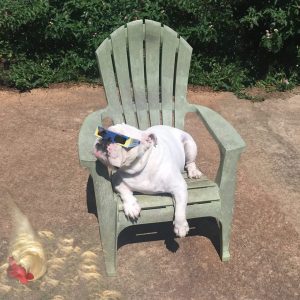 I saw, early in the morning, the sun diminish against a backdrop of sky. I saw a circular piece of that sky appear, suddenly detached, blackened, and backlighted; from nowhere it came and overlapped the sun. It did not look like the moon. It was enormous and black. If I had not read that it was the moon, I could have seen the sight a hundred times and never thought of the moon once. (If, however, I had not read that it was the moon—if, like most of the world’s people throughout time, I had simply glanced up and seen this thing—then I doubtless would not have speculated much, but would have, like Emperor Louis of Bavaria in 840, simply died of fright on the spot.)…I pray you will never see anything more awful in the sky. (“Total Eclipse,” 1982) 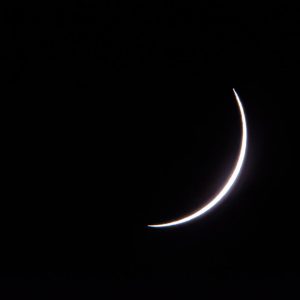 This Sunday, in his sermon series on the minor prophets and a cosmic coincidence, Jack will be preaching from Joel:

The sun shall be turned to darkness, and the moon to blood, before the great and awesome day of the LORD comes. (Joel 2:31)

For the day of the LORD is near in the valley of decision. The sun and the moon are darkened, and the stars withdraw their shining. The LORD roars from Zion, and utters his voice from Jerusalem, and the heavens and the earth quake. But the LORD is a refuge to his people… (Joel 3:14-16)

2 thoughts on “Eclipse Photojournal: Our trip through totality”