A speaker by speaker, song by song, verse by verse summary, with brief commentary, of Billy Graham’s funeral in Charlotte, NC on March 1, 2018. 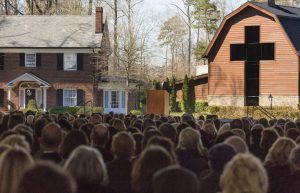 To me, it felt a little bit like the days after 9-11. The enchantment of this world was momentarily broken, and the curtain pulled back on the ultimate reality of what is good, true and beautiful. Thank you, Billy Graham, for pointing the way home in life and death.

Setting—Tent for 2,300 people positioned for the view to perfectly frame the Billy Graham library/museum, an enlarged dairy barn-styled building with a silo beside it. And to the left, the relocated dairy farm-style home in which he grew up. Barely pinkening redbud trees line a split rail fence.

It could be the cameras, but it looks like everyone is in navy. (the new black?) President Trump. Melania. The Pences. Ben Carson, N. Carolina governor. Nikki Haley. Sen. Ted Cruz. Cardinal Timothy Dolan. Max Lucado. Beth Moore. Jewish yarmulkes. Orthodox Patriarch in black headgear. A missionary to bedouin tribes  and other missionaries, unknown to us, but some of the “great ones” in God’s kingdom.

Donald Wilton-Pastor of First Baptist Spartanburg gives Scripture reading and invocation. He reads from Ephesians 2, “For by grace you have been saved through faith. And this is not your own doing; it is the gift of God, not a result of works, so that no one may boast.” Graham joined his church in 2008 and Wilton has visited him weekly in recent times. He travelled w/ the family to Washington and will conduct the graveside service. 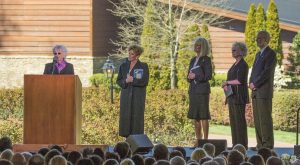 Jean Ford, Billy Graham’s sister “It’s so odd to be sitting here looking at my house.” There she learned to work hard, pray and love the Scriptures. “On Feb 21st heaven came down and took my brother. Heaven will come down again and take me, and Daddy would want me to tell you that Heaven can come down and take you too.”

Gigi, oldest daughter-While Daddy was in North Carolina milking cows, there was a little girl praying for him all the way over in China. (where Ruth’s parents were missionaries) She later recorded her prayer in a poem. Reads poem:

“Dear God, I prayed, all unafraid (as we’re inclined to do),
I do not need a handsome man but let him be like You;
I do not need one big and strong nor yet so very tall,
nor need he be some genius, or wealthy, Lord, at all;
but let his head be high, dear God, and let his eye be clear,
his shoulders straight, whate’er his state, whate’er his earthly sphere;
and let his face have character, a ruggedness if soul,
and let his whole life show, dear God, a singleness of goal;
then when he comes (as he will come)
with quiet eyes aglow, I’ll understand that he’s the man
I prayed for long ago.”

The Lord answered every one of those prayers for Mother, and many more!

Anne, next oldest daughter-My mother led in family devotions every day. Mother read and that was that. When Daddy was home he would read, and he would stop and discuss it. So from my mother I learned to read the Bible every day. And from my father I learned to think about it.

The date of his death was very significant. Feb 21st the day Jews focus on Scripture about Moses,’ the liberator’s, death. After Moses came Joshua to lead his people into the promised land. Anne has a keen prophetic sense that the end times approach. She also sees her father as a great liberator, freeing millions from the bondage of sin. Could it be that Jesus (Joshua in Hebrew) may be coming soon to deliver his people into the promised land? Into heaven?

Anne Reads I Thess 4:15-18 as her mother would personalize it: “’For this we declare to Anne by a word from the Lord, that we who are alive, who are left until the coming of the Lord, will not precede those who have fallen asleep. For the Lord himself will descend from heaven with a cry of command, with the voice of an archangel, and with the sound of the trumpet of God. And the dead in Christ will rise first. Then we who are alive, who are left, will be caught up together with them in the clouds to meet the Lord in the air, and so we will always be with the Lord.”

“I believe this is a shot across the bow from heaven,” she says. “I believe God is saying, ‘Wake up church! Wake up world! Wake up Anne! Jesus is coming. Jesus said that when the gospel is preached to the whole world as it is today in this service, as it is through churches, missionaries, ministries, Jesus said in Matthew 24:14, ‘When the gospel is preached, then the end will come.'”

I dedicate myself to preaching the gospel, doing the work of an evangelist so that five minutes before I die I will have no regrets.” So very inspirational. Clearly Anne has a prophetic gift like her Dad. I hope some churches who are hesitant to invite women as special speakers will take her up on it.

Ruth, the next eldest-“I have followed her all my life.” Big audience laugh. “I can tell my story…” Her first marriage ended in divorce. She met another man. Her children didn’t like him. Both Ruth and Billy counseled her to slow down. She plunged into marriage any way. “Within 24 hours I knew it was the wrong decision.” Fearful for her safety, she soon left. Another divorce. Dreaded heading home. Driving up the mountain toward her parents’ log home, she recounted her failures. “You never want to embarrass your father. You never want to embarrass Billy Graham.”

But there he was, waiting for her when she pulled up. Arms open. No blame. No shame. No condemnation. Unconditionally loving. Forgiving. “He showed me what God looked like.” Anne inspires with her wide-angle vision of God’s power and plan; Ruth reaches deeply to the heart with her story. I think the reason Billy Graham was so extraordinary was because God gifted him to do both with such remarkable power and heart-connection. 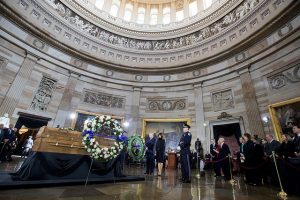 Ned, the youngest, has only time for brief remarks. His sisters pretty much ran over their allotted time. “I just want you to know that my father was FAT – faithful, available, teachable. May we all be that way,” he said. Would like to have heard his full talk.

Michael W. Smith at the piano begins to sing his song that he has sung for many of Franklin’s festivals: “Above all powers, Above all kings…Like a rose trampled on the ground you took the fall and thought of me…above all.”

His voice sounds a bit weak, even shaky at first. Then strengthens. But his soul pours through his voice and his playing. Very heart-felt. Billy Graham had originally planned for George Beverly Shea to sing, but Shea preceded him to heaven. What a reunion!

Sami Dagher from Lebanon: “I am a little man. He is a great man.” I couldn’t make an appointment to see him. But his assistant invited me to the prayer chapel. There was that great man on his face before God. We spoke of Jesus—lifting him up. God bless America for giving us such a great man.”

Billy Kim-Pastor, Graham team evangelist. During Billy’s final meeting in Soul he drew 1.1 million to his crusade. Mega-churches sprang up. My church went from 300-20,000.

Bill Gaither and the Gaither Vocal Band. “Because He Lives.” On TV split screen w/ slide show—Billy in Africa, on Great Wall of China. Serving in a food line. “Life is worth the living…just because he lives.”

Robert Cunville, Graham team evangelist from India-prayer of Thanksgiving. A life that has been so precious to all of us. Pray for your anointing on Franklin and Anne as they preach the Lord Jesus around the world.

Franklin Graham-funeral message. “We have come here today to honor a man of God. Told millions how to find heaven. Wrote a book on heaven. Today he is in heaven…”

My father loved, adored my mother. For her last few years when she spent most days in bed my father would sit beside her. They would sit quietly and look at each other. Eye to eye. For hours. I would feel like I was intruding.” (big laughter). People around the world saw him in stadiums and on TV. We saw him at home. There were not two Billy Grahams. He was always the same—out there and at home.

Summarized his father’s ministry…He preached God’s love. He preached about sin, judgment. John 14:6 “Jesus said to him, “I am the way, and the truth, and the life. No one comes to the Father except through me.” A few days ago he followed Jesus all the way to heaven. How about you? If this were your funeral, would you be in heaven? 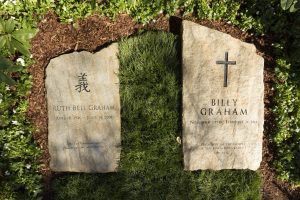 (John 14:6 is inscribed on Graham’s tombstone.) I am the way. The truth. The Life. No one comes to the father except by him. How can he say that? Because he was God in the flesh. And he took our sins to the cross. He shed his blood for our sins. Jesus is alive today. Are you trusting in him. Are you saved? Are you forgiven? If not, there is no better time than here, at Billy Graham’s funeral. If you just pray a simple prayer like this (offers sinners prayer) your sins can be forgiven.

Invites audience to envision heaven, casting the vision of the beauty, joy, reunions… “Daddy, I’ll see you again, maybe soon. But not yet.”

Hymn sing-To God be the Glory, a favorite of Billy Graham’s.

Benediction-Black pastor- May the grace of God, the sweet communion of the Holy Spirit abide among all of us. Please remain standing……until you’re told to do the next thing. Big laughter. 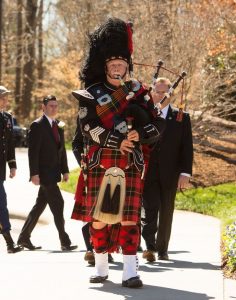 Bagpipes…From the back of the tent we hear the approach of a piper. He is decked out in full Scottish regalia, red plaid kilt and scarf and tall black fur hat. He walks slowly toward the front piping Amazing Grace, then leads the family procession toward the Graham library/museum and the grave site beside Ruth’s grave on the other side.

Casket is removed from bier to wheeled carrier. Rolled toward the library. The family walks behind the piper and casket. Looks like VP Pence follows family. Other small clusters of people follow.

As the crowd disperses the news commentators immediately begin discussing how beautiful and upbeat it was. Not sad. Such confidence that Billy is in heaven hearing, “Well done, good and faithful servant.”

His life, like the apostle Paul’s was rich with fruitful labor for others. But today it is “far better.”

You may watch the video here. Casket approaches tent at 1:35.