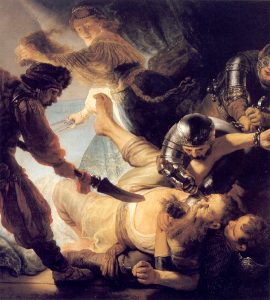 Reading through the Old Testament book of Judges lately and I’m struck by how God raised up Samson to make Israel great again. The Angel of the Lord visited his barren parents and promised them a son who would “begin to deliver Israel from the hand of the Philistines.” As auspicious a beginning as John the Baptist.

God’s Spirit “rushed” upon Samson and enabled him to kill Philistines who had been oppressing Israel for forty years. When he called out to God for strength, even for water, God provided. He empowered Samson to slaughter 1,000 Philistines with the jawbone of an ass, then cracked open a rock to replenish him with water.  Samson judged Israel 20 years and is included in the Hebrews 11 “Hall of Faith.”

And yet, Judges 13-16 portrays him as a strongman who was a narcissistic liar, a womanizer, an arrogant and boastful loudmouth, cunning and shrewd, thin-skinned and bent on mayhem and revenge.

I reread his story looking for one demonstration of wisdom or kindness, a servant’s heart or a heart for God…and couldn’t find any. Nothing that would justify my vote for him as a leader. But I did find this: When Samson ordered his parents to get him a Philistine wife they protested. He needed to find a good Jewish girl.

But Samson insisted, ‘Get her for me, for she is right in my eyes.'” His father and mother did not know that it was from the LORD, for he was seeking an opportunity against the Philistines (Judges 13:4-5).

Samson’s desire for a Philistine wife was clearly against God’s law:

When the LORD your God brings you into the land that you are entering to take possession of it, and clears away many nations before you…You shall not intermarry with them…for they would turn away your sons from following me, to serve other gods. Then the anger of the LORD would be kindled against you, and he would destroy you quickly (Deuteronomy 7:1).

That was exactly what was happening as the book of Judges began.

So the people of Israel lived among the Canaanites…And their daughters they took to themselves for wives…and they served their gods (Judges 3:5-6).

From a human perspective Samson’s desire to marry a Philistine woman who was “right in his eyes” went against his parent’s wishes; and he was breaking God’s explicit command. Yet Scripture says that Samson’s desire was from God because God was focused on bringing down the Philistines.

This blows my mind and smashes my categories. It forces me to deal with the reality that God institutes authorities for his purposes and priorities. And without his deeper understanding of what is really going on and what larger priorities are at stake, I am simply unable to discern the wisdom of his decision.

As the FBI Inspector General’s report pulls back the curtain on the perversions of justice at the highest levels of our government, as we watch President Trump’s cringe-worthy behavior play out in the nightly-news reality show, it makes me wonder what God is up to.

God’s strategic priorities and law-busting tactics in Samson’s story challenge me to…
…not be so sure of what I think America needs in its leaders.
…pray for President Trump.
…pray that God will move powerfully in house-cleaning justice and turn our people and his church to repentance.
…remember that Samson took thousands of Philistines down, even “all the lords of the Philistines,” but at terrible personal cost.