To me, one of the signs of a two-thumbs-up movie is when I find myself thinking about a movie for days afterwards. Florence Foster Jenkins is that kind of movie. Yes, it’s hilarious, but it also challenges us to consider – how do we move forward if we have far more passion than gifting? Is life all about following our bliss?

Many of us have the friend or family member with a passion for something – painting, singing, home decorating, for which they really have no talent. Do we humor them with insincere praise? Do we protect them from honest critics and real-life consequences? At what point do we help them with a reality check? Or do we play along forever?

At what point should truth trump loyalty?

Based on a true story, the real Florence Foster Jenkins pursued a passion for music her entire life. When her wealthy father told her, at age 17, that he would not support her intention to go to Europe and study music, the child prodigy pianist, who had even played at the White House, eloped with an older man. Her father promptly cut her off.

Within a year, the man was gone. Florence supported herself as a piano teacher until her mother had pity on her and helped her move to New York City where they found their way into the musical and social circles. A year later her Father died, leaving her an inheritance that enabled Florence to bloom in the circles where she had begun to plant herself.

By the time the movie begins, Meryl Streep and Hugh Grant as Florence Foster Jenkins and her manager/common-law husband have founded a music appreciation group called the Verdi Club with over 400 members. Streep and Grant turn in terrific performances that take us into the lives of seventy-something Florence, the damaged piano player who longs to sing and her British aristocratic St. Claire—the moneyless actor who longs to act.

In fact, Florence does give occasional private performances to a safe group of adoring friends and “critics” who only write rave reviews. She has used her money to endear herself to many who enjoy her patronage of music and up-and-coming performers, so much so that when the urge to laugh at her singing gets to be too much, they whistle and applaud to cover their giggles.

Is her singing really that bad? Listen for yourself. If you can sing, and you’ve ever tried to sing that off-key, you can appreciate how hard it was for Meryl Streep to sing like Florence. But according to Donald Collup, the creator of the Florence Foster Jenkins documentary A World of Her Own, Meryl was “spot on in her recreation of Florence Foster Jenkins’ voice.

“In his review of the movie, he states, ‘I can also confidently say that Ms. Streep recreates every single nuance of the Jenkins singing voice: glottal stops, an absence of vibrato, hit-and-run register breaks, the sliding up and arrival just short of a climactic high note, transforming the letter “r” into a vowel and the completely unintelligible diction.” 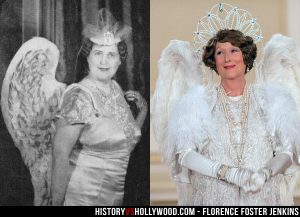 Energetic, but deluded, Florence aspires to make records and ultimately to perform at Carnegie Hall. She makes the arrangements while St. Claire is away. When he returns he discovers that she has booked the hall, bought 1,000 tickets and distributed them to wounded servicemen.

The thing St. Clair has always dreaded is happening: Florence is headed toward a real reckoning with the public and music critics outside her protective bubble. An ego this large crammed into a talent this small would not usually be sympathetic enough to make us care all that much.

But a tender scene early in the movie ushers us into the private pain of Florence and St. Claire. He settles her down in her bed, removes her wig, and covers her bald head with a turban. He tenderly kisses her goodnight, and gently closes the bedroom door. A cab takes him to his own quarters across town and the girlfriend who waits for him there.

How could a man be so affectionate, so caring for his wife, and then live separately? We soon find out. (minor spoiler alert) Her first husband left her with nothing but syphilis. And the poisonous treatments of that era—mercury and arsenic—not only took her hair and her ability to be intimate with a man, but also damaged the nerves in her hand so that she lost her ability to play the piano.

Once we understand the transforming tragedy of Florence’s life, we feel the same ambivalence as her friends—protective of this woman who has worked so hard to overcome so much … yet … utterly amazed that anyone could sing so horribly with a straight face.

Yet she did. In Carnegie Hall no less. To a packed house. And they turned away 2,000 more at the door. Not just in the movie, but in real life. How director Stephen Frears could pull off the riotous movie version of the concert, and still render Jenkins as fairly inspirational in the process, is a lasting tribute to Streep’s formidable talent.

But the movie provides far more than laughs: it touches on some very contemporary tensions. Just like in the movie, the tendency in today’s culture is for relationship to trump truth. In the name of “Compassion!” we shield one another from the consequences and criticism that can help us grow and become the people we long to be.

In a recent issue of Atlantic a high-school teacher describes a scenario with her students: Your boyfriend or girlfriend has committed a felony during which other people were badly harmed. Should you tell the truth about what happened?

The class erupted in commentary, but the bottom line was, you should absolutely be loyal to your friend.

By contrast, Jesus was full of grace and truth. He always speaks the truth in love.

When we are all grace and love, are we setting up the very people we love to crash into the wall of reality? The longer they live in the bubble, are we risking more pain when life as it really is shatters their illusions?

As for ourselves, The more we indulge our egos to follow our bliss, even as we try to do a little good for others to rationalize it, are we missing the opportunities to become the kind of people who can live with strength and grace, no matter the daunting truth of our own circumstances?

Florence Foster Jenkins shows us the complexity and difficulty of living the truth in love. And helps us appreciate the relief of living our life in the sight of God, seeing reality as he sees it and conforming our lives to it. Leaning into a Strength beyond our own to live in the real freedom and transformation it brings.

Florence Foster Jenkins is still in theaters, with the DVD expected in December.