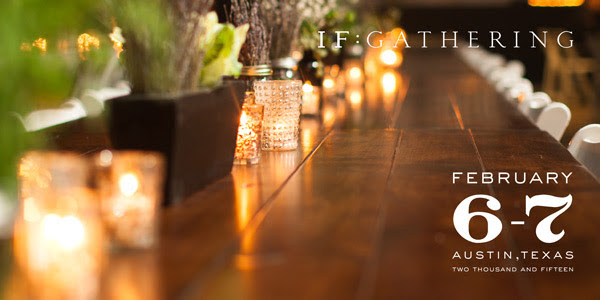 I wrote this review of the first IF Gathering in Austin, Texas right after it happened last February (2014). As the banner above reads, they’ll be meeting again in February, 2015. I encourage you to gather there or online. A fresh wind is blowing out of Austin! And you can find out more here.

The 1200-seat Austin Municipal Auditorium sold out in under an hour. So they offered live streaming to anyone with a computer. And from around the world 20,000 more registered, many of those inviting friends and even churches full of women. It was as IF the organizers had blown a giant whistle and thousands had come running…to what no one was exactly sure. Not even the organizers.

But here is my hunch: In Bird by Bird: instructions on writing and life Ann LaMott says that “Having a great narrator is like having a great friend whose company you love, whose mind you love to pick, whose running commentary totally holds your attention, who makes you laugh out loud, whose lines you always want to steal. When you have a friend like this, she can say, “Hey, I’ve got to drive up to the dump in Petaluma–wanna come along?” and you honestly can’t think of anything in the world you’d rather do.”

And I suspect that is why at least 21,200 women showed up: organizers Jennie Allen, Jen Hatmaker, Rebekah Lyons, Ann Voskamp and the IF gang are terrific narrators of life. And IF they were going to the dump we all wanted to go along.

I registered online, and like everyone else, paid what fit my budget. When I arrived Friday afternoon at Monica’s house here in Columbia, South Carolina I was greeted by seven other women in her living room strung with lights and candles to match the stage decorations that flickered on her big-screen TV hooked to her computer. While the 1200 on the screen in Austin were seated at tables, we were seated on Monica’s cushy couches. #comfiestconferenceever

Most of the women in Austin and in Monica’s living room were under 40. I am not. But I would have to have a pulse rate of 40 to not be infected by IF founder Jennie Allen’s contagious passion for Jesus and women and the people who live in the dump. And her flaming desire to connect the three.

The IF team intentionally did not release the list of speakers. But the story-tellers and speakers who walked on stage with a minimal 10-second video intro riveted us for hours. Beginning with Annie Lobert, married to a member of Christian metal band Stryper and founder of Hookers for Jesus. The former prostitute took us into the heart of Rahab and her great faith.

Angie Smith, married to a member of the much more mellow Christian singing group Selah did what we all do—compared herself to Annie and felt so uncool and unhip, only to find out that Annie had been deeply touched by Selah’s music.

Then Ann Voskamp took the stage with actual measuring sticks in hand and said she was so done with comparisons. “Measuring sticks always become weapons — of self-harm and Body-harm.” And she broke her measuring stick. She broke several, in fact, and called on us to see our great worth and beauty as God sees us and break ours.

IF is about gathering and equipping. It’s also about unleashing the next generation of women to live out their purpose. “We spend our whole lives,” Jen Hatmaker said, “blessing the blessed and safe.”

She told how God had moved her to help the homeless which led to serving the working poor, which led to coming alongside single Moms and finally to two refugees from Ethiopia sleeping in her house. Kind of like the DIRECTV commercials that show the guy getting mad over his cable bill, then taking down the electrical grid and end with “Don’t let your Dad get punched over a can of soup.” Once you get started partnering with God in his wild redemptive run of grace you have no idea where it will end. But it will be more life and joy than you can imagine.

The IF team has partnered with Feed the Hungry to “nuke” hunger, undernourishment, sickness and death not in the dump, but in one corner of Bolivia. And they definitely want you to come along. When you text them they send you the name of a child you can nourish there for $35 a month. They will also put you in touch with his mother to whom you can write and build a relationship of love and concern.

Until midnight tonight you can live stream all the IF sessions here. You’ll miss the wonderful discussions generated by the “IF” cards mailed to registrants. But you can purchase the CD’s at If’s web page and you can still register to continue the IF gatherings around your own table in the months to come: 6 women, 2 hours, four questions that they will send you.

They plan another large gathering in Austin next year and LOTS OF OTHER THINGS. They have a big God and a big faith and a big heart for people.

It amazes me what God can do with housewives and harlots and pig farmers’ wives. How he can speak through the under 40’s to rekindle the under and over-40’s desire for him and his work. Their basic idea is simple and powerful…”IF God is real…then what? Join the conversation.”And then don’t just think about the possibilities. IF God is real DO IT.

Submitted by Casey Prince (not verified) on Mon, 02/10/2014 – 13:34
I’m so glad to read that while you don’t fit into the “under 40 box”, you gathered with your people.  My family moved last year away from my home where my circle of friends ranged from teens to women I went to high school with, to my mentors in their 50’s and 60’s.  I have not found that kind of diverse community here yet but I am seeking it.

You are absolutely right, one would have to have a pulse of 40 to not be moved.  I found myself wishing I had my teen girls as well as my grandmother in the room watching with me.  When I read that you were in Columbia I wished I had known of you before because I would have told my mother-in-law who lives in Columbia and a friend at USC to find your church and jump into this gathering.

Love learning from under 40’s

Submitted by Lael Arrington on Tue, 02/11/2014 – 19:42
Thanks for this, Casey. I do lots of conferences that are mostly led by over 40’s so it was an absolute treat to watch the mostly under 40 leadership team of IF step up. I’ve read many of these women, but never heard them. Love learning about them and *from* them.

Here in Columbia we are already strategizing on follow up dinners and how we might bring this message to our church. If you’ll go to my website (www.laelarrington.com), find my email address and contact me I’ll let you know if and when we host it there–Fellowship Bible Church, near Lake Murray dam. Would love to include your mother-in-law and friend.

Enjoy your local IF connections!

I’m quite impressed with their follow-up, including the John study and the suggestions for the dinners. We have our first one planned for Feb 22. I hope you can continue the momentum with your local IF group. May God draw us all close and fuel the fresh fire!

What the heck is IF…

Submitted by Lael Arrington on Tue, 02/11/2014 – 19:50
Yep, Jess, that’s why I wrote this blog. As the speakers said, it’s a new concept and people are responding like they responded to manna…What the heck is it? I hope this helps your friends and mine.

Submitted by Ruth82 (not verified) on Mon, 02/10/2014 – 15:52
Great article.  Just a comment though, in case you didn’t realize it – Jen Hatmaker actually adopted two kids from Ethiopia…she didn’t just have 2 refugees sleeping in her house temporarily.  I realize that wasn’t quite clear from her talk.

Submitted by Lael Arrington on Tue, 02/11/2014 – 19:53
Thanks. She probably didn’t say refugees. I mistakenly assumed it. I did know that many of these young women have adopted children of foreign nationalities. Just shows they’re all in.

Submitted by lori.tischler@s… (not verified) on Wed, 02/12/2014 – 11:03
How the check did I not know about this? So would’ve gone…  sounds very exciting Lael. Thanks for this beautifully written post!  I agree; there is nothing more fulfilling than reaching the underprivileged and foreigners in our midst.  Blessings as you plan/do follow-up activities.

the heartbeat of IF

Submitted by Lael Arrington on Wed, 02/12/2014 – 23:43
Yes, Lori, it’s your sweet spot for sure. I encourage you to register at the website and stay in touch with what they are doing. Maybe host some of the dinners. I think the messages will soon be available in CD or MP3 formats.