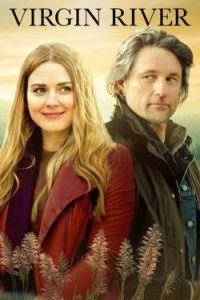 Virgin River is a down comforter on a cold pandemic night kind of TV series that invites you to find a cozy spot and wrap the warmth and softness of its love story and small town around you.

Unlike a comforter, it has some serious edges and romantic tension, but nothing that seems headed over a cliff. Even so, as the Netflix writers take Robyn Carr’s 20+ book series and elevate it to be as appealing as possible to a general audience of non-romance readers, they inevitably enfold some of God’s greatest lessons about love into their script.

Some reviewers accuse the show of being too traditional and cliched–too “Hallmarky.” I disagree. Yes it’s kinda soapy, but still in a different class. And to my mind it’s success simply proves that Jesus has the best information on how to have good relationships. When the second season was released last November it zoomed to #1, displacing both The Crown and Queen’s Gambit.

The story line: Broken by the death of her husband and seeking a fresh start, Mel Monroe, a Los Angeles trauma nurse and midwife, has responded to an ad for a nurse practitioner to assist a doctor in the small northern California town of Virgin River. Headed into town, her car spins into a ditch.

The gruff older man who stops to help her turns out to be the doctor she’s come to help. And he’s not happy that the mayor hired her. He doesn’t want her. But Jack, the guy who owns the main watering hole and restaurant in Virgin River, makes it pretty clear from the get go–he does.

In honor of Valentine’s Day here are four ways the series doesn’t just tell, but shows how God’s wisdom about loving well makes for a hit PG-13 series. Spoiler alert! If you haven’t seen Virgin River, here’s the trailer for Season 1.

Jack is a respectful, but pretty relentless pursuer in this relationship. With a staff to support the bar, he often finds time to break away and help people, especially Mel. He checks on her most evenings, drives her on errands and almost always has time to stop and listen. (I mean, this guy is always around!)

Mel is still finding her way out of great loss and hesitant at every step to respond to Jack’s growing feelings for her. But she does reciprocate, often checking in on him while running or looking him up in the bar.

Both are intent listeners, rarely dismissive or antsy to go. Listening to a problem they will often ask permission before they offer advice. Or respond with a gentle, “I wish I knew how I could help you.” Or simply sit in silence, offering the other space to speak their piece or share their story, if they feel safe enough. They don’t tend to cut others off but would rather give a few extra seconds of silence to make sure the other is finished speaking before they begin.

Here’s a fun Valentine’s season challenge: Notice how both Mel and Jack are both deeply empathetic, mirroring the emotions of the other with their vocal and facial expressions and body language. The author of Emotional Intelligence writes that mirroring is the heart of empathy, which is the heart of emotional intelligence. Each one is continually seeking to understand and appropriately feel with and affirm the feelings the other.

To that end they take frequent emotional temperature readings, asking, “How are you doing?” “You ok?” “How are you feeling about that?” These are great relationship skills. But perhaps the definition of a show’s “soap factor” has more to do with the frequency and intensity of the effort.

2. Love means wanting to say you’re sorry. And calibrating your seriousness and empathy to the measure of the hurt you’ve caused.

At the end of season one, their relationship gets so complicated that Mel takes a break from Jack and Virgin River and heads back to LA. Two weeks later, upon her return she walks into the clinic front door just as Jack is walking in the back.

“I think I’m gonna need a little more than ‘Hi, Jack.'” He walks past her.

“I’m sorry that I didn’t call you back. I just didn’t really know what to say.”

“Yeah, that was obvious when you didn’t return my calls.”

“I just needed a couple of weeks to sort things out.”

“I changed my mind. You don’t need to explain anything to me.”

The way of God’s love is the way of deep repentance. If we’ve gone out and muddied our shoes, we can’t just open the door, step back in, and track all the mud back over the carpet. We have to really wipe our feet. Mel has said the “I’m sorry” words, but immediately defends herself. So her brief apology doesn’t wash away her hurtful actions or begin to restore their relationship.

The next day a brief interchange drives home to Mel how much she has hurt Jack. She rebukes him for being a little harsh with Hope after the mayor violated his privacy. “You’re calling me harsh?” He stops, turns and looks at her, “You want to know what harsh is? Walking out on someone without an explanation. That’s harsh.”

Later that evening, she goes to speak to Jack in private and with real empathy looks him in the eye and tells him,

“I am sorry that I left without telling you.”

“Are you sorry that you came back without telling me?”

There is “deep magic” in those words spoken in true gentleness and humility. They truly wash and heal. Love can’t flourish or even survive without them.

3. There’s a reason God ordains a protective wall around sex exclusively within marriage: At its core, sex is trust

For two years Jack has been seeing Charmaine as a friend with benefits. Doc tells Mel, “I never got the impression that Jack was that serious about Charmaine.” At a town “mingle,” as they dance, Jack reminds Charmaine, “When we started seeing each other we both agreed that we were just gonna keep things casual.

She is clearly crushed. “So you’re saying that for the last two years you don’t feel any more committed than when we first met?…Jack, I know what we said when we first met. I thought that…after all this time…I thought…we’d have a future together….”

In their final break up scene he tells her, “I never wanted to hurt you.” Charmaine weeps as Jack drives away.

In my book, Faith and Culture, contributor and Gordon College Professor Bruce Herman beautifully describes the reason for her pain,

In art and in popular culture, there has been a gradual slide away from any sense of what is taboo.  Without taboos there is no meaning.  Taboos fence-in a particular experience – and what is fenced-in also fences other things out.  Case in point: sexuality.  The fence around sexuality is there to protect something that is very vulnerable and precious.  If you knock the fence down, you no longer have the sense of preciousness and eventually all sensitivity is lost.

What is sex?  At its core, sex is letting your guard down.  It’s saying “I trust you enough that I don’t have to protect myself in your presence.  I can take off my clothes as well as all my pretenses.  I can let down the fence with you because I trust you. It’s safe to give myself to you and you belong to me and I to you.”

And this is only possible when there is life-long commitment to honor that gift of self.  No one can entrust themselves to another person who has no intention of keeping that trust. (Promiscuous sex is a game, a lie, because you can’t possibly mean it: I give myself to you and take it back.)

That [act of trust] is the heart of sex.  The physical aspect of sex is not irrelevant, but it’s actually more a symbolic enactment of the spiritual reality taking place. I entrust myself to you, and give myself wholly into your care by becoming utterly transparent, utterly vulnerable.  Sex at its best is trust. Why have a fence around it?  Because it is so precious, so vulnerable and so subject to corruption.  That which is most precious is most rare.

The enemy’s great illusion is that Jack and countless others believe that, “Let’s just keep things casual,” and “I never meant to hurt you” agree with the real world God created. But they don’t. They don’t correspond to trust being at the heart of sex. Or with the fact that physical bodies release bonding chemicals when they become one. The consequences of mistakenly believing both ideas will ripple out in Jack’s life, Charmaine’s life and Mel’s life until their story ends. And in real life until we die.

Like sex, love at its core is trust. And it has to be earned by showing how we will honor and protect the other person. When Hope violates Jack’s privacy and divulges the most intimate details of his and Charmaine’s relationship, Jack tells her, “For me, family is about trust. I just don’t think I can trust you right now.”

This section is a major spoiler alert!

Basically she’s saying, I love you because you have sacrificed so much for me.

You’ve sacrificed your time and energy, refurbishing the cabin that was promised me when I came, but which turned out to be an absolute disaster.

You sacrificed your desire to be far more than friends. Always respecting me. Never pressuring me to go where I wasn’t ready to go.

You sacrificed to be willing to listen and understand far more than to speak and be understood.

Mel reciprocated, responding to Jack’s sacrificial love with sacrifices of her own.

She sacrificed her desire to return to LA twice–after she arrived when the situation looked far worse than she’d imagined, and again at the end of season one.

She sacrificed to accept Charmaine as a patient and endure her attacks and scorn because Jack asked her to.

And finally, she sacrificed her fears in order to keep engaging with Jack, not shutting him out, and eventually responding to his love with a choice to risk her wounded heart and love him in return.

But God shows his love for us in that while we were still sinners, Christ died for us. (Romans 5:8)

May your Valentine’s Day overflow…

…with the real presence of God and your loved ones, listening and empathizing well

…with forgiveness and mercy received and given

…with trust and intimacy with God and your husband

Advisory: If you decide to watch it…I almost quit after the first couple of episodes. It gets better. Also, across the 20 shows there are 4 scenes where buttons come undone and we fast forwarded. That incudes one scene (even plot thread) about “young love” that I’d also fast forward. Parental previews recommended. From the quotes I’ve read, Robyn Carr’s Virgin River books, from which the series is taken, are steamy and not nearly as well written as the show. Do not recommend.

Question: If you liked it tell my why…