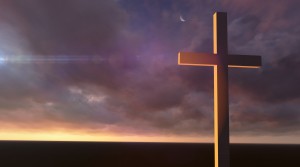 Stand with me at the foot of the cross. Come close. So close that when we look up, all we can see is that face. The arms outstretched, the hands barely visible in our peripheral vision.

What do we see?

If you saw Mel Gibson’s The Passion of the Christ, you no doubt took away indelible images of the physical pain and agony of Jesus’ death on a Roman cross. In our imaginations we see the nails and the stretching, hanging, and suffocating, and we are astonished that anyone would willingly give up a throne to submit to such excruciating torture.

On the day he died, Jesus endured so much physical pain; yet the Scriptures say he didn’t open his mouth. Like a lamb going to the slaughter, he endured silently the scourging, mocking, spitting, slapping, nailing, the struggle to breathe.

But at the crucial juncture, Gibson’s movie could not show us, nor can we even imagine the greater pain of being cursed—being totally removed from the presence of God. Around noon something beyond all imagination began to happen.

Even if we had been standing at the foot of the cross with John and Mary, we might no longer have been able to see Jesus. But we could hear him. Jesus took God’s wrath upon himself, and the Father cut him off. Although he suffered all the betrayal, mocking, nails, and hanging in silence, the forsaking was more than he could bear. Finally he screamed, “My God, my God, why have you forsaken me?”

Everyone reading this has probably experienced the pain of being cut off from someone we love.

The phone rings. Our loved one has died.

We stand at a bedside and hear our loved one draw his or her last breath.

The spouse we cherished moves out.

A son or a daughter runs away, and we have no idea where our child is.

Death, separation. We know something of the pain. I can remember breaking up with a young man I loved very much. After our final conversation, we both drove to our separate apartments. When he reached his exit, his car veered right while mine veered left. I felt so cut off, watching his taillights disappear, my tears turning to sobs.

In his book, Saved from What?, R. C. Sproul gives us a glimpse of Christ’s pain. “There were thousands who died on crosses and may have had more painful deaths than that of Christ. But only one person has ever received the full measure of the curse of God while on a cross.

I doubt Jesus was even aware of the nails and the spear—He was so overwhelmed by outer darkness. On the cross, Jesus was in the reality of hell.” Totally cut off from the grace and presence of God.

Second Corinthians 5:21 tells us, “God made him who had no sin to be sin for us.”

What could it mean for the holy Son of God to be made sin?

I’ve wondered if he became, if he entered into, our thoughts and feelings of anger and lust—the state of our hearts on the worst days of our lives—at the darkest moments of our sin and selfishness.

If he became the sexual rage of a Ted Bundy and the cold, maniacal blood thirst of Hitler. If he became the guilt that washed over Judas and the horror of regret and torment of every soul in hell.

If those thoughts and feelings invaded his righteous soul, and his own responses of grief and horror added to his pain. Whatever it was, it made the physical pain pale by comparison.

Sproul writes, “At the moment Christ took upon himself the sin of the world, He became the most grotesque, most obscene mass of sin in the history of the world.” He was completely cut off from God and every good gift in the world.

In Gibson’s movie, the earthquake is a mild tremble, the darkness that began at noon is brief. But in reality, the earth shook so that tombs were opened, and the faithful dead walked out.

The darkness and the curse, the wrenching of Jesus’ soul from the Life of his Father, ground on for hours. Finally, around three o’clock he cried, “It is finished.” The darkness faded. Jesus’ spent, bloody face became visible again.

He was still breathing, straining to raise himself up on his nailed feet and gasping for air. “It was over,” Sproul writes. “What was over? His life? The pain of the nails? No. It was the forsakenness that ended. The curse was finished. The light of God’s countenance returned.”

With a final push Jesus managed one last breath and said, “Into your hands I commit my spirit.”

When we stand at the foot of the cross and think of the Lamb moving down the steps of his lofty throne, leaving the cries of the seraphim behind, shedding his splendid robe, walking through the smoke and the quaking thresholds of the temple…When we think of him being stripped naked, lying down on the cross—bloody and throbbing—spreading his arms for the nails, and being made sin and forsaken, when we see his eyes welling up…You have no idea how much I love you…how do we respond?

I think of how I would feel if it were my husband or my father hanging there naked, sacrificing himself for me. The thought of so much pain and humiliation inflicted on one I love takes my breath away. That he would take it only to spare me the agony overwhelms me.

The knowledge that my Creator God left his throne, was beaten to a bloody, unrecognizable pulp, and became a horrific mass of my sin takes me only so far down a road of understanding until my finite mind stalls out.

I cannot comprehend it. I can only look up and see “sorrow and love flow mingled down,” and let it wash over me.

He loves me so much more than my father or my husband.

What does it mean to have that much love and desire envelop me?

God is so much more love than I imagined. I am desperately loved, no matter what.

I am loved with the kind of love like when your child breaks your heart, and you throw your arms around him or touch his hand through a prison glass and know that you love him through the grief and pain, and nothing he or she could do could ever change your father-love or mother-love.

What are the worst things you’ve ever done? God desires me in spite of the lies I’ve told, in spite of the way I’ve loved things and used people. In spite of the cracking of my critical whip. Jesus’ sorrow and love flows over me—his child and his enemy—and makes peace between God and me. No matter what.

When my imagination burns with the terrible beauty of my God, I think, How can I not love and enjoy a God like that?

(Originally published in Godsight: Renewing the Eyes of Our Hearts by Lael Arrington, Crossway Books, 2005)

What impresses you most when you meditate on Jesus hanging on the cross?

3 thoughts on “What do we see at the foot of the cross?”