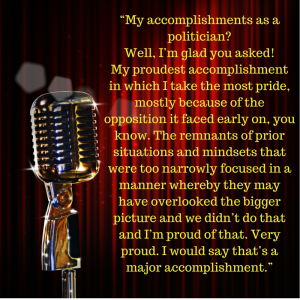 “We have been silent witnesses of evil deeds.

We have become cunning and learned the arts of obfuscation and equivocal speech.

Experience has rendered us suspicious of human beings, and often we have failed to speak to them a true and open word.

Unbearable conflicts have worn us down or even made us cynical. Are we still of any use?

We will not need geniuses, cynics, people who have contempt for others, or cunning tacticians, but simple, uncomplicated, and honest human beings.

Will our inner strength to resist what has been forced on us have remained strong enough, and our honesty with ourselves blunt enough, to find our way back to simplicity and honesty?” (Dietrich Bonhoeffer, Letters and Papers from Prison, Germany, 1943-45)

Until you reach the last lines you might think this quote could be from political outsiders Ben Carson, or Carly Fiorina…or, if it weren’t so eloquent and respectful, even Donald Trump. Simply substitute “political class” for “human beings” in line three.

(As a Christian who was passionate about forbearing with others [see part one of this post], Bonhoeffer says we do not need “people who have contempt for others.” For Bonhoeffer, a lifestyle of contempt for people made in God’s image was a disqualifying display of pride. As the old hymn says, the place to pour contempt is on “all my pride.”)

Any contemporary comparison of the current American political and cultural climate to that of Nazi Germany is automatically dismissed as overreach. But as we read what brave, thoughtful people said in 1940’s Germany we have to have to form our own opinions.

A fresh wind is blowing through our country. People are weary of the political class. Tired of their murky speech and cunning tactics.

How “truly and openly” did former Secretary of State Hillary Clinton speak at the Women in the World Summit on April 29th?

“Far too many women are still denied critical access to reproductive health care and safe childbirth,” she said. “Laws have to be backed up with resources and political will. And deep-seated cultural codes, religious beliefs and structural biases have to be changed (italics mine).”

The first, most revealing question we must ask in this climate of “obfuscation and equivocal speech” is, “What do you mean by that?”

Mrs. Clinton, what do you mean by advancing “critical access to reproductive health care”? Do you mean advancing abortion? Clearly we have to show compassion to women in crisis pregnancies and those who have chosen abortions. But we must speak simply, honestly and humbly about the evil of abortion too.

What do you mean by the phrase, “deep-seated..religious beliefs …have to be changed”? What “political will” do you intend to summon to make that happen? Passing laws and prosecuting violators? Fines, even imprisonment of those whose beliefs compel them to reveal or oppose the advance of abortion’s evils?

How can we rally “simple, uncomplicated, and honest human beings” to speak “bluntly” in a nation that cannot name our common enemy as “Islamic fundamentalist terrorists?” If we cannot demand this honesty while we still enjoy great freedoms, how would we demand it if we were to lose our freedoms, like Bonhoeffer did? His simplicity and honesty landed him in Hitler’s prison.

The man who spoke so eloquently about forbearing with the personalities of others that grate on us drew a clear line in the sand for us: when we behold acts of evil we must speak up. We must take risks to oppose it. Bonhoeffer went so far as to join the conspiracy to assassinate the Fuhrer, for which Hitler ultimately had him hanged, even as the Allies were pouring into Germany.

God has allowed the curtain to be drawn back on so many evils this summer: the dismemberment of innocent unborns, the oppression of black people, the institutional approval of gay marriage.

May God grant each of us the courage to speak simply and honestly about “what is being forced on us.” Not in contemptuous rants to friends or on Planned Parenthood’s Facebook page. Not by “liking” or supporting candidates who pour contempt on others. We have plenty of respectful alternatives.

Like, Bonhoeffer, may we speak truth with sincerity and respect. And sacrifice greatly to redeem the evils we see with actions that back up our words.

How is this influencing your response to the upcoming presidential election? Please respond in the comment section below…

If you missed Part 1 of this post you may find it here: When Friends Frustrate Us: A Bonhoeffer Alternative to Criticizing and Withdrawing

4 thoughts on “When Politicians Fail Us: A Bonhoeffer alternative to doublespeak and cunning…what you can do”