Donald Trump lives by the advice he dispensed in his best-selling business book The Art of the Deal: “Fight Back–always hit back against critics and adversaries, even if it looks bad.”                           It’s looking bad.

A gold-star Muslim father, Khizr Kahn, whose son was killed in Iraq, challenged Mr. Trump from the podium of the Democratic Convention. “Have you even read the Constitution?…You have sacrificed nothing and no one.”

True to his own advice, Trump hit back and keeps hitting back. He even attacked Kahn’s wife. (No surprise to Heidi Cruz.)

The Star Trek movie Into Darkness ends with a moving eulogy from a young Captain Kirk, “There will always be those who mean to do us harm…Our first instinct is to seek revenge…. But that’s not who we are.”  Who would have thought that a Star Trek movie would express a nobility that seems beyond the reach of Election 2016?

BILL O’REILLY: In your Christian faith, there is a very significant tenet and that’s the tenet of forgiveness. I think you should forgive [those]who come at you in ways you don’t like. I think you should be a bigger man and say, you know what? I didn’t like it and you should make that case all day long. But, I’m not going to take any action against it. You know, don’t you think that’s the right thing to do?
DONALD TRUMP: It probably is. But, you know it’s called an eye for an eye I guess also. You can look at it that way.
O’REILLY: No, no, no, no. That’s Old Testament. If you’re the Christian, the eye for the eye rule goes out. Here’s what it is: turning the other cheek (taps his cheek). 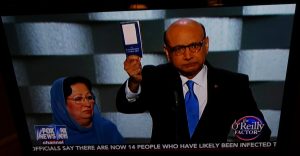 The apostle Peter added, “…Christ also suffered for you, leaving you an example…When he was reviled, he did not revile in return; when he suffered, he did not threaten, but continued entrusting himself to him who judges justly.” 1 Peter 2:21, 23

The conventional wisdom of Jesus’ day was, “if you hit me, I hit you back equally hard.” But Jesus clearly showed…this is not my way. This is wrong. This is not the way of truth and grace. So many times the way of Jesus looks “holier than thou” or hopelessly naive.

But we are seeing the reasons why his commands are good and beautiful play out right before our eyes. If you revile, belittle, and assault the dignity of others, you wound them and make them want to withdraw from you. If they have gravitas and moral authority, you look small and selfish by comparison. You alienate the people looking to you for leadership. Relationships break down. Unity is destroyed. You alienate the very people you’d like to help you win. The Bushes, McCain, Kasich, Cruz…. Now we can add gold-star families and veterans to the list.

The way of Jesus protects the dignity of each individual made in the image of God. It nurtures trust. It protects relationships. Jesus showed that the ruling powers could hit him so hard he could suffer and die and yet overcome and even redeem their hits. He demonstrated that good holds the greatest power and brings the greatest win. Evil pales beside love and sacrifice.

Over and against the way of Jesus is the way of Niccolo Machiavelli, the author of Vladimir Lenin’s favorite book, The Prince. Written in 1513 for aspiring leaders, Machiavelli rejected the way of Jesus. If men were good it might work. But men are wicked. So, he contended, an aspiring leader would need a different playbook. For the prince [or princess] who must operate in the world of realpolitik, evil would often be more effective than good.

It is better to be feared than loved.
Keeping your word is foolish if it brings you harm. Others will break faith with you so you should feel free to break faith with others.
The end justifies the means. (Original to Machiavelli) If hitting back makes you look stronger, then hit back. Hard.
Don’t worry about being good. Just focus on appearing to be good. A Prince should be “a great pretender and disassembler.” The Prince should appear to be “all mercy, all faith, all honesty, all humanity, all religion.”

If you are okay with cruelty and alienation, lying and pretense, then take the way of Machiavelli. Hit back twice as hard. Make people fear you. Lie. Dissemble.

Lie like Hillary has to the gold star families. At the funeral of those killed in Benghazi she assured two families that they would punish the man who made the video (implying that the video started a demonstration which resulted in the attack). This, when she had already emailed her daughter that it was an Al-Queda attack. But that didn’t fit Obama’s re-election narrative.

Lie like Hillary did this past Sunday morning after the convention when Chris Wallace asked her about her emails. She responded, “Director Comey said my answers were truthful, and what I’ve said is consistent with what I have told the American people, that there were decisions discussed and made to classify retroactively certain of the emails.”

Pretense. Director Comey said her answers to the FBI were truthful. He said nothing about her truthfulness to the American people. In fact, when Rep. Trey Gowdy quoted what Hillary said to the American people about her emails, FBI Director Comey responded time and time again that was not the case. “That’s not true.” Some of the emails were indeed classified “at the time” she sent them. Yet Hillary invoked Comey to defend herself.

“It depends on what the meaning of the word, “is” is. Private meanings. Slick phrasing. Legalistic technicalities. Saying that, if the gold star families had a different version of what she said at their sons’ memorial service than she did, well, she was telling the truth. Which meant they were lying.

Both Trump and Hillary have demeaned and disrespected gold-star families. They have retaliated and lied in ways so blatant that even their defenders acknowledge they have crossed the line.

They could simply apologize. But that would mean giving up a Machiavelian ethic they’ve been committed to over the course of their careers. To a certain degree it has “worked” for them. At the expense of their integrity, trustworthiness and likability. They are gaining the world but losing their souls.

If leaders treat people with contempt, disrespecting and belittling them, can it ultimately serve their best interest? If leaders hit others back hard and blatantly lie, can they win both power and the hearts of the people?

The commands of Jesus are for our good. Our protection. And the good of the larger community. Lately, they are looking better and better. If we reject them and go our own way we will pay a high price.

We are already paying it. We have never seen such election lies and cruelty play out in real time right in our living rooms. With every lie, every retaliatory blow, our hearts sink. America is diminished before a watching world.

Donald Trump and Hillary Clinton both profess to be Christians—Christ followers. May his Spirit compel them to forgive and speak truth in the sight of God. And may we, chastened by the power of their negative examples and enabled by sheer grace, show the beauty of following Jesus.

Adapted from my post, “Is Hitting Back ‘Twice as Hard’ Really the Way to Win?”

How is all this impacting you? How do you think it is impacting America? Please tell us in the comment section below…

5 thoughts on “Hitting Back. Lying. How this election makes Jesus look good.”