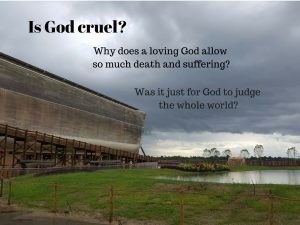 In last week’s post I reported on our trip to the Ark Encounter in northern Kentucky, a Biblically scaled ark with many thoughtful exhibits. Invoking artistic license, the creators have assigned names and back stories to everyone on the ark. In one exhibit Japheth’s wife (whom they’ve named Rayneh) is troubled by the massive loss of life outside their boat. She ponders these questions as she goes about her daily chores. 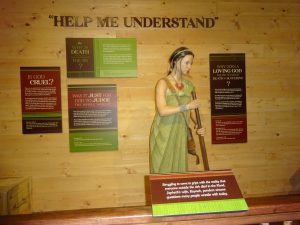 Many of us have read the Biblical narrative in Genesis: The humans he made have become God-sickeningly corrupt. So he pours out his judgment in a flood, and all flesh “in whose nostrils was the breath of life…died.” Maybe you’ve been pierced by the same questions. 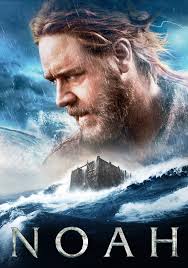 When the movie Noah came out in 2014, the highly inflammatory (and proud of it) TV talk show host Bill Maher pressed the point: “It’s about a psychotic mass murderer who gets away with it, and his name is God…. Conservatives are always going on about how Americans are losing their values and their morality, well maybe it’s because you worship a guy who drowns babies.”

Maybe you’ve pondered Rayneh or Bill Maher’s questions. Is it loving to save Noah and let everyone else drown…even babies? That question ought to challenge all of us.

It’s the question of our time: Is a God who judges evil really good? We can presume, as C.S. Lewis said, “to put God in the dock” (the witness stand) and grill him with Bill-Maherish questions about his actions and motives– “What kind of tyrant punishes everyone (even the babies) just to get back at the few he’s mad at?”

The Bible offers God’s perspective in Genesis 6: “The LORD saw that the wickedness of man was great in the earth, and that every intention of the thoughts of his heart was only evil continually. And the LORD was sorry that he had made man on the earth, and it grieved him to his heart. So the LORD said, ‘I will blot out man whom I have created from the face of the land…for I am sorry that I have made them.'”

God created us and longs for a relationship with us. These men and women’s determination to ignore him and go their own wicked way pierced his heart. He takes no pleasure in the death of the wicked.

We don’t have a description of their sin here, but we do have a description of the Canaanites’ sin. These were the people living in the land God promised to Israel. He didn’t bring them into the land until the Canaanites sin reached a high threshold of evil. God describes it in Leviticus 18: rampant incest, adultery, homosexuality, bestiality, child sacrifice. “…by all these the nations I am driving out before you have become unclean, and the land became unclean, so that I punished its iniquity, and the land vomited out its inhabitants (Leviticus 18:24-25). What do you do with a people who thinks their highest form of worship is burning their babies in the fire?

In the time of the flood, the corruption led to extreme violence. The world was not safe, not even for children. It was a world filled with the worst kind of Mad Max gang warfare—chaotic and cruel.

When we see what the North Koreans have done to Otto Warmbier for taking a poster off a wall, when we see people mixing up deadly synthetic drugs and selling them by the thousands, when we see sexual predators locking women up and using them as sex slaves—when we see real depravity and violence we long for justice, for these depraved people to be condemned and punished and even given the death penalty.

How can God stand by and do nothing?

As I’ve wrestled with these questions I’ve thought, what were the options? If God had done nothing the innocent children would suffer at the hands of violent adults. If God had executed justice on all the adults but saved the children, who would care for them? They would die slow deaths of starvation and exposure to the elements and wild beasts.

Perhaps we can see a severe mercy in the death of babies. God can foreknow them and call them and bring them into an eternity of blessing with him (Romans 8:29-30). That is far better than living in a world on fire with corruption and violence. Far better than being caught up in that violence, being corrupted by it and spending an eternity separated from God because of it.

When I think about these hard questions I have no easy answers. But I know the Answerer. I can finally rest on the same bedrock Abraham did: “Will not the judge of all the earth do what is right?”

Even from the midst of my own struggle with the pain and limitation of rheumatoid arthritis I believe he will. Because he keeps his promises. He has been so loving and faithful to me. I can trust that he knows far more about the consequences of sin than I do. He knows when to permit and redeem it and when to remove it so it doesn’t destroy more than he allows.

God will do what is right because he is far more loving and good than we can imagine. Any doubter has only to look at the cross to see God the Son taking upon himself the sin of the world, suffering the consequences of sin and separation from God so that we wouldn’t have to.

Jesus said, “For God so loved the world, that he gave his only Son, that whoever believes in him should not perish but have eternal life. For God did not send his Son into the world to condemn the world, but in order that the world might be saved through him” (John 3:16-17). “There is therefore now no condemnation for those who are in Christ Jesus” (Rom 8:1).

Jesus is our ark. We enter into relationship with him with humility and gratitude and we are safe. Will not this judge, whose heart is grieved by our sin, whose blood was shed to cover it, do what is right?

Questions? How have you answered these difficult questions? Please respond in the comments below…

2 thoughts on “Ark, flood…how could a loving God…?”