It so happened that Luther, an intellectual genius, was also a great Biblical scholar and a writer with tremendous command of the German language. His audience found his powerful Biblical insights and courage to call out the Church almost irresistible. 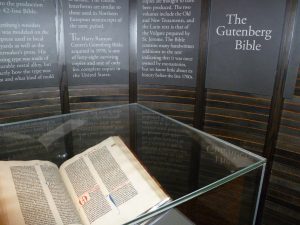 @ Ransom Center for the Humanities, Univ of Texas at Austin, one of five in the US

In God’s providence Luther posted his 95 Theses not long after the invention of the printing press. In 1450 Gutenberg had published the first printed Bible (in Latin, of course)

Sixty-seven years later, on Oct 31, 1517, Luther hand wrote his 95 theses IN LATIN-a summons to fellow professors at Wittenberg University to a theological debate. His students had them translated into German and printed.

Back in the early days of the printing press, there were no copyrights and no authors’ permissions required. Printers printed whatever they thought would sell. And without his knowledge, sales of Luther’s 95 Theses took off. Within two weeks all the surrounding towns were discussing it.

Initially Luther addressed church leaders with sweetness and respect, winning many to his side because of it. But as time went on and his differences with Rome grew, he sold more and more books laced with wit and rudeness, embracing the populist language of marketplaces and taverns:
“The pope should stand up like the stinking sinner that he is.”
“If Rome is not a brothel above all brothels I can imagine, then I do not know what ‘brothel’ means.”

Two years after posting the 95 Theses Luther finally resolved his great tension over how he might be truly forgiven and justified before a holy God. The breakthrough came from insight into Romans 1:17 while he was “on” or “upon” the university tower, the location of both a study and the “john.” (We report, you decide)

The Romans text reads, “For I am not ashamed of the gospel…For in it the righteousness of God is revealed from faith for faith, as it is written, “The righteous (the just) shall live by faith.”

Luther wrote, “Hence it comes that faith alone makes righteous and fulfills the law….”  “Faith is a living, daring confidence in God’s grace, so sure and certain that a man would stake his life on it a thousand times. This confidence in God’s grace and knowledge of it makes all men glad and bold and happy in dealing with God and all His creatures.”

This was the insight that totally changed his life. He wrote, “Thereupon I felt myself to be reborn and to have gone through open doors into paradise.” Now, “the whole of Scripture took on a new meaning, and whereas before the ‘justice of God’ had filled me with hate, now it became to me inexpressibly sweet in greater love. This passage of Paul became to me a gate to heaven.”

Sola fide. By faith alone. Solo Christo. In Christ alone. Sola gratia. By grace alone. Based on a return to Sola Scriptura. Scripture alone. Soli Deo Gloria. To the glory of God alone. These became the clarion calls of the Reformation. 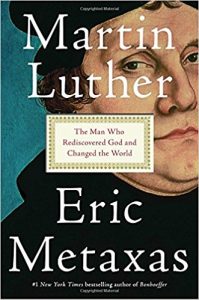 Imagine what an amazing relief this was for Luther. No more striving. No more crawling up stairs, extreme fasting, flagellation, lying out in the snow all night—none of it could secure the righteousness of Christ, but he could receive it as a free gift of grace by faith. He became a man driven by joy to press into Christ and share the treasure.

This was Christ’s providential gift to us through Luther—the message that we can be delivered from the endless treadmill of works to merit Christ’s merit into the freedom and joy of grace.

In 1520 in his pamphlet The Babylonian Captivity of the Church he expanded on this message. Instead of seven sacraments he insisted that only two were commanded in Scripture: baptism and the Lord’s Supper. Neither was a work, but rather both were expressions of faith.

This became the blueprint for reformation in the church. No longer would going to confession be mandatory nor would individuals be required to list every sin or be quizzed about them. Luther abolished penance and denounced purgatory. Neither could be found in the Bible. We can be grateful for such a triumph of freedom and grace.

Equally important, Luther insisted on the authority of 1 Peter 2:9 “But you are a chosen race, a royal priesthood, a holy nation, a people for his own possession….” “I say that neither pope, nor bishop, nor any ordained man has the right to impose one syllable of law upon the Christian man,” he wrote, “for all of the faithful are God’s priests.”

With this teaching Luther freed each believer to dig his own well of living water. We need no longer be dependent upon the Church’s reservoir or pipes or the priests’ mediation to draw near to God. We are all elevated to the status of priests.

We may confess our sins directly to God or to one another, participate fully in communion, and thanks to his passion to translate the Bible from Hebrew and Greek directly into the language of the people, Luther opened the door to enable us to read God’s words for ourselves, a blessing we tend to take for granted.

In June of 1520 Pope Leo threatened Luther with excommunication if he didn’t recant his 95 Theses. “Arise Oh Lord and judge thy cause,” he wrote. “A wild boar has invaded thy vineyard.”

In the winter of 1520 Luther received the bull and threw it into a bonfire, defying the pope. “Because you have corrupted God’s children,” he said, “may God destroy you in this fire. I am not afraid and I rejoice to suffer in so noble a cause.”

In early 1521 Leo excommunicated Luther from the Catholic Church and damned his soul to hell. Luther was summoned to the Diet (or parliament) of Worms to give one final account of his heresies. He was welcomed along the way with shouts of “Long Live Luther!” and “Death to the Pope!”

But at the diet no one made the case from reason or Scripture why he was wrong. He was simply asked if these were his books. And if he would recant.

Luther famously responded, ““If, then, I am not convinced by proof from Holy Scripture, or by cogent reasons…I neither can nor will retract anything; for it cannot be either safe or honest for a Christian to speak against his conscience. Here I stand; I cannot do otherwise; God help me! Amen.”

We take freedom of conscience for granted too. But it was revolutionary for one man to stand on conscience against all the powers of the Empire and the Church. It helped to democratize Western Europe and usher in the modern world. But Luther’s was not our modern freedom of conscience. Not Rousseau’s radical individualism anchored only in my own thinking and opinions.

Rather it was freedom of conscience captive to the Word of God.

We can see another example of God’s providence in how Luther was protected by his Saxon Prince, Frederick the Wise. Frederick was disappointed that papal envoys never engaged Luther from Scripture. He would not hand Luther over and Pope Leo dared not cross him because he needed his vote for his choice for Emperor.

After Worms Luther was “kidnapped” by Fredrick’s men and taken to the Wartburg Castle. While Luther was sidelined his friends took over leadership of the Reformation and took it in directions with which he strongly disapproved. But he never lost his great faith that this was a movement of God and God would oversee its ultimate direction.

We tend to see Luther as the immovable champion of the Reformation, but speaking truth to the World’s greatest power of Empire and Church cost him dearly. At Worms on the night before his final stand he expressed the same faith in the midst of great anguish:

O God, Almighty God everlasting!…how dreadful is the world! Behold how its mouth opens to swallow me up…O my God! Help me against the wisdom of this world…Do this, I beseech you; you should do this . . . by thy own mighty power . . . The work is not mine, but yours.

I have no business here . . I have nothing to contend for with these great men of the world! I would gladly pass my days in happiness and peace. But the cause is Yours…You have chosen me for this work. I know it! . . . And it is righteous and everlasting! O Lord! help me!…Behold me prepared to lay down my life for your truth . . . suffering like a lamb.

And though the world should be thronged with devils – and this body…should be cast forth, trodden under foot, cut in pieces..consumed to ashes, my soul is yours. Yes, I have your own word to assure me of it.
My soul belongs to you, and will abide with you forever! Amen!
O God send help! . . . Amen!

The next day, after his refusal to recant, he was allowed to return to Wittenberg. In God’s providence he was “kidnapped” on the road and hidden away in the Wartberg fortress. After 10 months he returned to pastoring, teaching and leading the Reformation from Wittenberg. He died of health complications at age 63.

Luther later incorporated his prayer into his most famous hymn, “A Mighty Fortress Is Our God:”
Let goods and kindred go, this mortal life also.
The body they may kill.
God’s truth abideth still.
His Kingdom is forever.

While we can be so grateful for God’s providence in giving us great gifts through Luther’s life and ministry, the man had his faults. Especially his anti-semitism. Next week we’ll explore how to respond to a Luther or a Founding Father with great blind spots, especially racism.