This case is so important for freedoms of religion and speech still to be determined, including your own freedoms, that it’s worth reading this short summary of what the Justices actually said in their own history-making words. 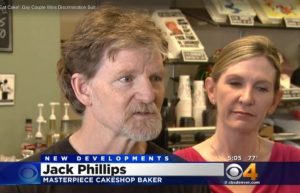 Last week a happy Colorado baker, Jack Phillips, celebrated his religious liberty at the Supreme Court. Maybe you read headlines like, “Court rules in favor of baker who refused to make wedding cake for gay couple.” As you read these excerpts of their opinions below you will grasp so much more of the issues, context, and future challenges to our freedoms than just reading headlines and short quotes. (My words appear in italics.) Here’s a powerful example from Justice Clarence Thomas’s opinion:

“Phillips told the couple, ‘I’ll make your birthday cakes, shower cakes, sell you cookies and brownies, I just don’t make cakes for same sex weddings.’  It is hard to see how this statement stigmatizes gays and lesbians more than blocking them from marching in a city parade, dismissing them from the Boy Scouts, or subjecting them to signs that say “God Hates Fags”—all of which this Court has deemed protected by the First Amendment.

“Moreover, it is also hard to see how Phillips’ statement is worse than the racist, demeaning, and even threatening speech toward blacks that this Court has tolerated in previous decisions. Concerns about “dignity” and “stigma” did not carry the day when this Court affirmed the right of white supremacists to burn a 25-foot cross; conduct a rally on Martin Luther King Jr.’s birthday; or circulate a film featuring hooded Klan members who were brandishing weapons and threatening to ‘Bury the niggers….’…The First Amendment gives individuals the right to disagree about the correctness of Obergefell and the morality of same-sex marriage.”

The challenge before the court

In Thomas’s opinion as well as the majority opinion written by Justice Anthony Kennedy the Justices show how they frame the legal challenge and then base their rulings from the constitution and legal precedent.  They were concerned with “the proper reconciliation of at least two [constitutional] principles.”

Phillips believes that, “’God’s intention for marriage from the beginning of history is that it is and should be the union of one man and one woman.’ To Phillips, creating a wedding cake for a same-sex wedding would be equivalent to participating in a celebration that is contrary to his own most deeply held beliefs…to create a wedding cake for an event that celebrates something that directly goes against the teachings of the Bible, would have been a personal endorsement and participation in the ceremony and relationship that they were entering into.”

Jack Phillips’ freedoms were challenged by Colorado’s anti-discrimination law that reads, “’It is a discriminatory practice and unlawful for a person, directly or indirectly, to refuse, withhold from, or deny to an individual or a group, because of disability, race, creed, color, sex, sexual orientation, marital status, national origin, or ancestry, the full and equal enjoyment of the goods, services, facilities, privileges, advantages, or accommodations of a place of public accommodation’…And the ALJ determined that Phillips’ actions constituted prohibited discrimination on the basis of sexual orientation, not simply opposition to same-sex marriage as Phillips contended.”

The deal-breaker for the Court

However, the deal-breaker for the Court was the “religious hostility” shown to Jack Phillips recorded during the proceedings as shown in these excerpts from the opinions:

“The neutral and respectful consideration to which Phillips was entitled was compromised here, however. The Civil Rights Commission’s treatment of his case has some elements of a clear and impermissible hostility toward the sincere religious beliefs that motivated his objection… That hostility surfaced at the Commission’s formal, public hearings, as shown by the record. On May 30, 2014….

“One commissioner suggested that Phillips can believe “’what he wants to believe,’ but cannot act on his religious beliefs ‘if he decides to do business in the state.’”

“Another said, ‘“I would also like to reiterate what we said in the hearing or the last meeting. Freedom of religion and religion has been used to justify all kinds of discrimination throughout history, whether it be slavery, whether it be the holocaust, whether it be—I mean, we—we can list hundreds of situations where freedom of religion has been used to justify discrimination. And to me it is one of the most despicable pieces of rhetoric that people can use to—to use their religion to hurt others.’”

In his concurring opinion Judge Gorsuch said, “In [the commission’s] judgment, Mr. Phillips’s intentions were ‘inextricably tied to the sexual orientation of the parties involved’ and essentially ‘irrational.’”

The heart of the Supreme Court Ruling

Based on these statements and others SCOTUS ruled that, “the Colorado Civil Rights Commission’s consideration of this case was inconsistent with the State’s obligation of religious neutrality. The reason and motive for the baker’s refusal were based on his sincere religious beliefs and convictions.

To describe a man’s faith as “one of the most despicable pieces of rhetoric that people can use” is to disparage his religion in at least two distinct ways: by describing it as despicable, and also by characterizing it as merely rhetorical—something insubstantial and even insincere. The commissioner even went so far as to compare Phillips’ invocation of his sincerely held religious beliefs to defenses of slavery and the Holocaust. This sentiment is inappropriate for a Commission charged with the solemn responsibility of fair and neutral enforcement of Colorado’s antidiscrimination law—a law that protects discrimination on the basis of religion as well as sexual orientation. The record shows no objection to these comments from other commissioners.

For these reasons, the Court cannot avoid the conclusion that these statements cast doubt on the fairness and impartiality of the Commission’s adjudication of Phillips’ case.

“…on at least three other occasions the Civil Rights Division considered the refusal of bakers to create cakes with images that conveyed disapproval of same-sex marriage, along with religious text. Each time, the Division found that the baker acted lawfully in refusing service…the Commission’s consideration of Phillips’ religious objection did not accord with its treatment of these other objections…. “the Division found that the bakeries . . . refuse[d] the patron’s request . . . because of the offensive nature of the requested message.”

Just as “no official, high or petty, can prescribe what shall be orthodox in politics, nationalism, religion, or other matters of opinion…it is not, as the Court has repeatedly held, the role of the State or its officials to prescribe what shall be offensive. The Colorado court’s attempt to account for the difference in treatment [of bakers who refused to bake cakes] elevates one view of what is offensive over another and itself sends a signal of official disapproval of Phillips’ religious beliefs.

Justice Gorsuch added in his concurrence:…no bureaucratic judgment condemning a sincerely held religious belief as “irrational” or “offensive” will ever survive strict scrutiny under the First Amendment. In this country, the place of secular officials isn’t to sit in judgment of religious beliefs, but only to protect their free exercise.

And Justice Thomas added in his concurrence: States cannot punish protected speech because some group finds it offensive, hurtful, stigmatic, unreasonable, or undignified. “If there is a bedrock principle underlying the First Amendment, it is that the government may not prohibit the expression of an idea simply because society finds the idea itself offensive or disagreeable…

For the reasons just described, the Commission’s treatment of Phillips’ case violated the State’s duty under the First Amendment not to base laws or regulations on hostility to a religion or religious viewpoint.

The Constitution “commits government itself to religious tolerance, and upon even slight suspicion that proposals for state intervention stem from animosity to religion or distrust of its practices, all officials must pause to remember their own high duty to the Constitution and to the rights it secures.”

“…the delicate question of when the free exercise of his religion must yield to an otherwise valid exercise of state power needed to be determined in an adjudication [another lawsuit] in which religious hostility on the part of the State itself would not be a factor in the balance the State sought to reach.” In other words, freedom of religion vs non-discrimination should be decided in a case not so hostile to religion

“…whatever the outcome of some future controversy involving facts similar to these, the Commission’s actions here violated the Free Exercise Clause; and its order must be set aside.

“The outcome of cases like this in other circumstances must await further elaboration in the courts, all in the context of recognizing that these disputes must be resolved with tolerance, without undue disrespect to sincere religious beliefs, and without subjecting gay persons to indignities when they seek goods and services in an open market.

“The judgment of the Colorado Court of Appeals is reversed. It is so ordered.” (7-2)

Cause for concerns for future rulings

Even now, the court is considering whether to hear the case of Baronelle Stutzman, the Washington State florist who also declined to create floral arrangements for a same-sex wedding. Like Jack Phillips she would sell her gay friends any flowers in the store, but because of her belief in traditional marriage she would not use her artistic skill to create custom arrangements for their wedding. Like Phillips she has appealed to the US Supreme court after losing at the state level. If they take the case they will deal with this issue further stated in the Phillips majority ruling…

“When it comes to weddings, it can be assumed that a member of the clergy who objects to gay marriage on moral and religious grounds could not be compelled to perform the ceremony without denial of his or her right to the free exercise of religion. This refusal would be well understood in our constitutional order as an exercise of religion, an exercise that gay persons could recognize and accept without serious diminishment to their own dignity and worth.

Yet if that exception were not confined, then a long list of persons who provide goods and services for marriages and weddings might refuse to do so for gay persons, thus resulting in a community-wide stigma inconsistent with the history and dynamics of civil rights laws that ensure equal access to goods, services, and public accommodations.” [How will they define and “confine” the exceptions? This is the question that may severely limit the freedoms of Christians in the wedding service industry, families who want to adopt children but reject same-sex marriage, etc.]

Here is Baronelle in her own words describing what is at stake for her (1:48…wait for it)…

The larger issue is not settled. But one issue is: The State may not devalue Jack’s or your religious beliefs. And that is what the Colorado Civil Rights Commission did to Jack Phillips’ freedom of religion.