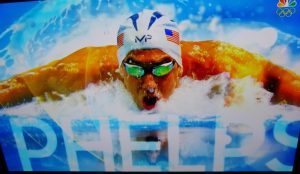 If you’ve been watching the Olympics these past weeks you’ve seen many male and female bodies beautifully sculpted by years and years spent practicing their sport. From swimming to high jump to kayaking, we see male and female bodies shaped in similar ways by training, but the women are shorter and less buff than their male counterparts. The men simply swim faster, jump higher and paddle more powerfully than the women.

For teachers in the Charlotte, NC school district, it must have been something of a reality check. They spent part of their in-service training last week being instructed by resources from transgender activists.

By day they were told that sex is “assigned” at birth. As if sex is something that a delivery nurse arbitrarily or accidentally determines.

By night they watched highlights of every male sprinter lining up in the blocks with larger shoulders and thicker wrists than their more graceful female counterparts.

They saw how the constantly DNA-triggered wash of testosterone in Usaine Bolt’s body enabled him to run for the 100-meter gold in 9.81 seconds while his Jamaican teammate Elaine Thompson won hers in 10.71.

By day they were told that we call ourselves a man or woman based on ” an internal sense of being male, female, neither of these, both, or another gender(s).” Based on how we feel in the moment, with no special dignity or purpose to it.

By night they watched male and female Olympians kissing their babies or holding their babes in arms as they took victory walks on the track. The XX or XY DNA in every cell in their bodies had genetically determined their destiny to be fathers or mothers.

By day the Charlotte teachers were instructed how to help young students (not boys and girls, but “students”) fill out a “Gender Unicorn” worksheet that presented them with multiple gender options:

By night they watched games that were totally binary. And have been since 1900.

On Saturday they might watch a controversial athlete, Caster Semena, run the women’s 800 meter race. She is more muscled up and faster than the competition. Her birth certificate declares she is a female. But it appears she has elevated levels of testosterone in her body that give her an unfair advantage over the other women.

We live in a fallen world. My DNA triggers my immune system to attack my joints. Caster’s triggers a surplus of testosterone. Some genes trigger an intersex genetalia.

But these are anomalies. Binary sexuality is the created order and the foundation of civilization. When adults want to introduce gender unicorns to school children, they express concern for young people with trans feelings. They don’t want them to feel abnormal, or get bullied. We all need to show great compassion for kids who feel this way. But this kind of educational effort also has serious consequences from how our kids think about their own identity to the social structure of the family and what is best for human flourishing.

Are we ready to give up science and biological facts to mitigate the discomfort of a small percentage of students? Why not rather teach kindness and forbearance for those whose feelings do not agree with their biology? According to Dr. Paul McHugh, who once oversaw sex change surgeries at Johns Hopkins until they abandoned it, more than 60% will grow out of it if binary choices continue to be held up as the norm.

Not only is the percentage of students small, but the same CDC study shows that LGBT’s and those unsure of their sexuality are also engaging in other at-risk behaviors. Professor Robert Lopez, President of the International Children’s Rights Institute and a self-described bisexual, told The Stream, “It seems that the youths tagged [in the CDC study] as gay, lesbian, and bi have high incidents of many misbehaviors, like carrying weapons to school, cocaine use, steroids, getting in fights, and starting marijuana before they are 13,” he said in an email interview.

“For instance, gay teens report high rates of being beaten up by their significant others, of being forced to have sex against their will by people they are dating — which would imply that in the gay dating pool there are just a lot more uncharitable behaviors in general. It is simply impossible that all these outcomes are the result of homophobia.”

Granting these students approval and legitimacy on a “gender spectrum” seems to be encouraging them to make choices that are undermining their ability to flourish and be healthy. Where is our compassion for their ultimate good?

(This conclusion has just been strengthened by a new study released on August 22, 2016: “Sex and Gender” by Drs. Lawerence Myers and Paul McHugh. Their groundbreaking report “examines nearly 200 peer-reviewed studies on sexual orientation and gender identity concludes that science hasn’t confirmed key theories about these subjects, including the belief that homosexuals are ‘born that way.'”)

Why would we want to encourage choices about sex and gender that might encourage more children to become enmeshed in at-risk behaviors and the depression that often goes with them? Why would we want to confuse children, instructing them that male and female sexuality is an illusion? Research proves that children raised by their biological mother and father grow up with “better physical, cognitive and emotional outcomes on average” over those who don’t.

There is no scientific evidence to support that intentionally teaching 89% of heterosexual kids that male/female binary sexuality is an illusion is healthy.

And what damage might the Gender Unicorn inflict on the Olympic games? Might the teachers of the future go home to watch increasing numbers of testosterone or estrogen-enhanced trans and intersex “women” deprive biological women of their place in the games?

If the Gender Unicorn doesn’t work at the Olympics, why would we bring it into our schools? There is a much more time-tested wisdom: “God created them male and female. And God saw everything that he had made, and it was very good.”

2 thoughts on “The Olympics, the Gender Unicorn and The Goodness of Male and Female”