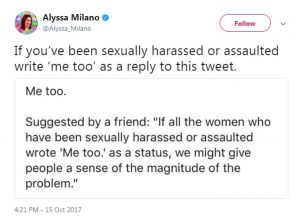 Yes, #metoo. Thankfully not the seriously damaging kind. Even so, I remember how in years past I felt all the feelings that have been swirling around since the reveal of Harvey Weinstein’s sexual predations launched the movement in October…Surprise. Disgust. Did that really happen? Did he really say that? Put his hand there? Why didn’t I say something?

On the Mexico City Metro I did. I turned and glared and called the groper out (quite loudly!): “Que poca educacion tienes!” How little education you have!

But in my 20’s when it came to my boss’s boss, an elected official, sad to say, I simply tolerated the continuous flirtations and jousted back. He was three times my age and a very powerful man in Texas. I played the game and I’m sorry I did. Also sorry I didn’t graciously tell one of my best friend’s husband that his p—- joke wasn’t worthy of him.

Coming of age in the 60’s it felt like the price we all had to pay. I don’t see much discussion linking the epidemic of sexual harassment to the sexual revolution. But once we traded a Biblical view of human dignity and virtue for “if it feels good do it,” the floodgates opened. Men were emboldened in their pursuit of “chasing tail.” And women have paid a higher price ever since.

I’m grateful that the movement has given us more of a voice and compels people to listen.

It’s staggering to read the honest accounts of the powerful in this season of reckoning. They thought our stunned silence or self-protection by playing along meant that we liked it. Dustin Hoffman thought the young intern enjoyed his whispering “I want to f—you” in her ear. Richard Dreyfuss, All Franken–so many are drop-jawed that, blushing and laughter aside,…We. Did. Not.

God calls us to treat each other as his image-bearers. We deserve to be treated as we would treat someone like God—“Outdo one another in showing honor” Romans 12:10. Hopefully the outcome of this watershed moment will be to treat each other with more dignity and respect, if not because we amend our values, then to avoid being publicly shamed.

Because the payback floodgates are opening wide the other way. I completely empathize with women’s pent-up hurt and anger. And I don’t mean to make light of it.

But now, as we see the movement maturing, social media and business practice is becoming judge and jury. Is it swift justice? Or is the course correction running off the rails?

Christine Flowers, a columnist in Philadelphia, has called the #MeToo movement “unwieldy and unforgiving, mixing all sorts of conduct together and retroactively stigmatizing acts that — until the social media age — were considered boorish and brutish but not capital offenses.”

To process our response we need to dig down: What is the goal in addressing inappropriate behavior, sexual harassment, abuse and assault?

Hopefully it is justice. The righting of a wrong. But what role does mercy play? If it is relational, and not criminal, then, at least within the church, Jesus gave us his way of working for justice clothed in mercy: “If your brother sins against you, go and tell him his fault, between you and him alone. If he listens to you, you have gained your brother. But if he does not listen, take one or two others along with you, that every charge may be established by the evidence of two or three witnesses. (Matthew 18:15-16) If that does not resolve things, tell it to the church. This is the best hope of pursuing justice with honor and mercy.

It is the exact opposite of making accusations publicly on social media. Go in person and try to make it right. If the person doesn’t “listen” or admit his or her guilt then, take witnesses (friends he respects, a counselor, elders) and establish each charge with evidence and witnesses. If he or she listens and repents then you have won your brother.

There still need to be consequences and perhaps counseling. As Beth Moore has eloquently made the case, the church cannot shield perpetrators. But the way of Jesus includes mercy that opens a way forward to heal and restore relationships.

Something is missing from the current national conversation

When it comes to inappropriate behavior and even low-level harassment that does not rise to the level of abuse or assault, the energy being poured into vengeance and political maneuvering overwhelms any discussion of forgiveness, reconciliation, or restoration. Any admission of guilt is met with such harsh condemnation, such immediate demand for dismissal from one’s job or office or candidacy, that the well of reconciliation is poisoned. This approach naturally invites a backlash, which is also gaining momentum. Without mercy the backlash will grow and the movement will be diminished.

The tension between justice and mercy

On the other hand, if the harassment has risen to the level of criminal abuse or assault (and social media is increasingly blurring the lines), then justice demands punishment, and condemnation is necessary. We saw this play out last week when Rachel Denhollander read her victim’s impact statement in court to convicted Michigan State and Olympic doctor Larry Nasser.

Speaking from a Biblical worldview, Rachel told him, “The Bible you speak carries a final judgment where all of God’s wrath and eternal terror is poured out on men like you. Should you ever reach the point of truly facing what you have done, the guilt will be crushing. And that is what makes the gospel of Christ so sweet. Because it extends grace and hope and mercy where none should be found. And it will be there for you.

“I pray you experience the soul-crushing weight of guilt so you may someday experience true repentance and true forgiveness from God, which you need far more than forgiveness from me—though I extend that to you as well.” This was biblical justice wrapped in forgiveness and mercy. (I encourage you to read her full statement here. Or watch it here. These quotes are 27 minutes in.)

The consequences of Nassar’s abuse have been enormous. Hundreds of children and women have dealt with the violation and pain. Nassar was convicted and sentenced to 40 to 125 years in prison. “I just signed your death warrant,” the judge said at his sentencing. Investigations continue among enablers at MSU. The president and athletic director have resigned.

After the media picked up her statement, Rachel told Christianity Today, “One of the areas where Christians don’t do well is in acknowledging the devastation of the wound. We can tend to gloss over the devastation of any kind of suffering, but especially sexual assault, with Christian platitudes like, ‘God works all things together for good’ or ‘God is sovereign.’ Those are very good and glorious biblical truths, but when they are misapplied in a way to dampen the horror of evil, they ultimately dampen the goodness of God. Goodness and darkness exist as opposites. If we pretend that the darkness isn’t dark, it dampens the beauty of the light.”

I am grateful for Rachel’s transparency on many levels: It exposes, even more than the Weinstein stories, the depth of both depravity and woundedness that the #metoo movement compels us to think about. As she is documenting what really horrific abuse and assault looks like, her story cautions us to try to make careful distinctions between inappropriate behavior, harassment, and assault.

Finally her statement reveals the tension we face as we try to respond: Justice or mercy? Rachel’s words remind us that, just as we see at the foot of the cross, God will not compromise or minimize his justice. Each little girl or woman is infinitely valuable, and God will hold those who dishonor them to account. Those sins nailed his perfect Son to the cross. We should feel empathy for the victims and disgust or even revulsion for the perpetrators

But just as we see at the cross, if God’s justice can be preserved, it is the height of his glory to show mercy. To offer forgiveness and work for restoration. We have all sexually sinned. God has punished that sin, pouring it out on Jesus. We don’t need to suffer eternally for our selfish choices. We need only reach out to Jesus, believe and receive his amazing grace.

In my husband’s twenty + years of pastoral ministry he and the elders have publicly confronted sexual sin three times–with a staff pastor, an elder and a deacon. Twice there were those who pushed to cover it up. Deal with it privately. I so appreciate their commitment to justice and transparency. And the way they worked for restoration.

May God give us great wisdom to sort through the complexities of this issue and fill us with his power and love to respond with justice and mercy as he would.

How has the #metoo movement impacted you? Please respond in the comment secition below…