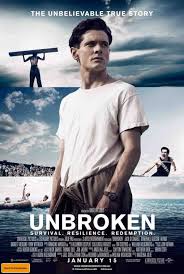 Hillenbrand is a genius in a fairly new genre—narrative non-fiction. She can write a page burner that takes you into great depth about what it meant to grow up in the Great Depression or how to operate a Nordon bombsite. Here’s a woman who writes like she’s interviewed hundreds of veterans and visited dozens of battlefields.

Not so.. She suffers from chronic fatigue syndrome, especially the attending vertigo, so much that she rarely leaves her Washington DC apartment. She even has to limit the hours she spends in front of a computer screen. The very limitations that confine her have forced her to order hard copies of primary sources—especially old newspapers and magazines—to research both her first book, Seabiscuit and Unbroken.

Her tactile immersion in that world has helped her bring it to life in a way that surpasses what most authors produce from interviews and on-site visitation. In fact, she discovered the story of forgotten hero Louie Zamperini on the back of a newspaper clipping about Seabiscuit.

Unbroken has spent over four years on the New York Times best-seller list. Universal had bought the rights to Zamperini’s memoir back in 1957 but it took Hillenbrand’s craft and best-selling success to revive a project that had floundered for over fifty years.

Finally it was Jolie who came up with the doable idea of how to compress the sprawling war epoch into a two-hour movie. It really would need another hour (or this DVD) to tell the “rest of the story.” But the book and the movie will still enrich your life with its story of resilience and redemption. Here are five ways it has enriched mine:

#5 Unbroken deepened my thankfulness for and celebration of America. I was shown again how the privilege of living in the greatest nation in all the world in all of history was bought at great price. I have backed way off cable news and talk radio in the last couple of years. The more cynicism and fear mongering tightens its grip on our country, the more I choose to lift my vision to the bigger picture of America’s story and the Kingdom future and work locally for hope and change. Think we have it so terribly bad? Watch the 1940’s movie Grapes of Wrath and now Unbroken to put the war/economic/debt jitters in perspective.

#4 Hillenbrand’s detailing of the great risk taken by Army airmen challenges my own desire for comfort and ease. I did not know that 52,173 airmen were killed in World War II. Or that B-24 bombers were so risky to fly. Stateside, 14,903 airmen died in non-combat wrecks. On one sortie Louie’s plane returned with 594 bullet holes. The greatest risks I take are relational, or reaching outsiders with the good news of Christ or putting a book out there for people to take shots at. Really? I’m so grateful that God has called us to a spiritual battle that makes life so much more meaningful. The higher the stakes and risk the richer the meaning.

#3 I have just sat down to holiday meals of home-made waffles with fresh pecans toasted in butter, shrimp cocktail and crab quiche, home-made amaretto cheesecake and Paula Deen’s amazing fried chicken, low-country boil and home-made vegetables (in her Savannah restaurant). Louie and his companions starved for two years. Afloat in the vast, searing equatorial Pacific they would recall Mom’s cooking, reconstructing recipes ingredient by ingredient, describing the taste of each mouthful. Trying to trick their gnawing stomachs with their powers of imagination.

I cannot even imagine what it would be like to eat nothing but seaweed for a week, much less a year. I walk into a store and see the conucopia of color, shapes and smells. In these days of air cargo and irrigation we enjoy so much. They starved with so little.

#2 I have realized afresh how Jesus’ unfailing love and encouragement helps me reach farther and overcome more than I ever thought possible. Louie’s brother, Pete, loved his juvenile delinquent brother enough to redirect the energy he spent literally outrunning his pursuers into running track. Pete spent hours, days, years, goading Louie to run. Run faster. Run smarter. As Louie ran in Hitler’s 1936 Olympics he thought of something Pete had said, “A moment of pain is worth a lifetime of glory.” That vision would literally carry Louie across the finish line. During the war Pete became gaunt with worry over his brother.

When our book group met to discuss Unbroken I asked, “Have any of you ever had anywhere near such a big cheerleader in your life?” Silence. All heads shook “no.” But then I realized afterwards, Jesus has been that kind of encourager for me. Carrying me. “As the Father has loved me, so have I loved you.” I have a hard time imagining how much Jesus loves me and is for me. But when I abide in him I feel it. I have indeed had a Pete in my life.

#1 Unbroken showed me the vanity and destructiveness of making personal honor an idol and the richness of despising shame. Honor is a good thing. But when it becomes an ultimate thing it destroys.

Hllenbrand exposed how the Japanese valued honor above life. They were taught that to submit to capture, rather than fight to the death, would so dishonor oneself or one’s family that life would be worthless. That’s what made the Japanese such formidable kamakzis and captors. And why many (most?) had no regard for the human dignity of their captives. In their twisted view of honor they believed that if their enemies chose imprisonment over fighting to the death it showed that their honor and dignity were already forfeit.

When Jesus’ honor and dignity were stripped away on the cross, rather than sinking into shame (or erupting in anger) he endured, despising the shame. He looked down on shame with contempt. (Heb 12:2) Louie’s story reminded me that, when I am dishonored or not valued, rather than giving in to shame (or self pity or anger) Jesus gives me the power to fix my eyes oh him and despise the shame. His great love for me anchors my dignity and honor.

If I am not appreciated I can choose to get over it. I can choose “the life that is truly life.” I can forgive. I can make friends with anyone, work anywhere regardless of status or power or perks. When it comes to partnering in his redemptive work nothing and no one is “below me.” Jesus’ joy can be my joy.

Promoting the movie to theater owners Jolie said, “In the end, its message is one we all need now more than ever — the journey of a man finding his way through the darkness and into the light.” Zamperini is “someone who helps to remind us all what each of us is capable of.”

Yes and no. (And spoiler alert.) Yes, Zamperini found the courage to endure the shipwreck, the starvation, the exhaustion of the work camps and the insane torment of “The Bird,” the camp commander. But after he was liberated and returned to the States victorious, after he married his high school sweetheart and had a family…as he battled alcoholism and night terrors…that’s when he finally began to break.

Contrary to Jolie’s take, Zamperini was not capable of holding his family and life together. It took the redeeming love and power of Jesus. At Billy Graham’s 1949 crusade in Los Angeles a broken Louie gave his life to Christ.

Louie’s real life shows us that the truest grit and determination pales beside the power of the gospel. That in our brokenness and God’s forgiveness we find a joy and power that sustained Louie until just this past July when he died at age 97.