“Christian’s sexual tastes are intriguing to Anastasia, but they are also the result of emotional wounds that she sets herself the task of healing. He wants to take charge of her, and she wants to take care of him. She tolerates the kind of sex he wants, and even enjoys some of it, but what she really wants is something more, and she wants to make him want that, too.”

Now gently ask them, or yourself, “Do you see a common thread in these stories? Do you think “authentic love” could ever mean that a man ties a woman up and hurts her? Even if she consents?” Do you think it values and honors her?

The bigger question is “What do you think ‘authentic love’ means?

When God described himself to Moses he described himself as “merciful and gracious, slow to anger, and abounding in steadfast love and faithfulness” (Exodus 34:6). Authentic love=Steadfast love=who God is. Love that is immovable and loyal. Covenant love that God promises to those who love and honor him by keeping his commandments.

Proverbs tells us that “What is desired in a man is…..steadfast love.” Don’t we know it. We long to be cherished—valued and honored and tenderly loved…forever. Never used for selfish purposes. Never ignored. Never betrayed. Never abandoned.

God has designed us to need, at the deepest core of our being, the very thing he *is* at the very core of his being. But instead of seeking God’s steadfast love and the love he provided for within the covenant of marriage between a husband and a wife, we go our own way and try to arrange for love.

Yet, is our departure from the God’s way of pursuing love, sex and marriage really bringing us the love we long for? Most published studies on the issue of the happiness of couples living together outside of marriage say “No.” Some even citing that the divorce rates for previously cohabiting couples are 50% higher than those who moved in together after the wedding.

According to the New York Times “the most recent research suggests that serial cohabitators, couples with differing levels of commitment and those who use cohabitation as a test are most at risk for poor relationship quality and eventual relationship dissolution.” Cohabiting couples cite less commitment than married couples. Less commitment means less trust, means less intimacy which is built on trust.

You can google the research on the paths that appeal to you, but the results tend to be the same: the most successful path to steadfast love and the happiness that goes with it lie along the ancient paths of biblical wisdom. God’s laws may feel restrictive, but what if they really were given with our highest happiness in mind?

As I watched the 2015 Grammy ceremony last weekend I saw Sam Smith take the stage again and again to claim four grammys for his album, In The Lonely Hour, and his hit single, “Stay with me” described as a hymn to a one-night stand. “Oh, won’t you stay with me? ‘Cause you’re all I need/ This ain’t love, it’s clear to see/ But darling, stay with me.“

Interviewed about his sad music in Digital Spy Smith explained, “Disclosure’s record is what you listen to when you go out and you go clubbing, and my record is what you listen to on the walk home, whether it’s that night or the morning after…Even my A&R was like, ‘We can’t call it The Lonely Hour because it’s too depressing; people will read that and think it’s too depressing’. And, for me, that’s how I feel.”

And it’s resonating deeply with today’s audience. Over three million have downloaded the single and the album was the #3 album in the US in 2014.

And I wonder how many are making the connection between the way we are pursuing love and settling for sex and the ache in our hearts. Between bondage and sado-masochism and the heartbreak of 9,000 victims of abuse every day.

A friend who was once in an abusive relationship responded to 50 Shades this way: “At one point Christian shows up unexpectedly where Anastasia is and says ‘Anastasia don’t you know there is no place you can go that I cannot find you?’ Even reading those words causes my heart rate to go up and makes me a little queasy. It strikes such fear in me, much more than any of the sexual aspects of the book. It may be due to my history but I truly believe it should give any one pause. [That control issue} can cause you to feel just as helpless and trapped as bondage, maybe even more so because it isn’t tangible, especially in today’s technologically advanced world.”

Many who defend 50 Shades point out that by the third book Christian and Ana are married and raising a family. They see a redemptive arc to the story. The reviewer in Atlantic Monthly writes, “By the end of the third book, Christian gives up on being in a dominant/submissive relationship with Ana—his sexual preferences were a way of coping with childhood abuse, he realizes, and now that he has Ana, he doesn’t have to be that way any more.”

So Anastasia submitted to all the shame and humiliation and fear and lip-biting and tears and…it worked! She has sacrificed so much and yet her love has redeemed Christian.

How different this message is from Brooke’s. From the Grammy stage Brooke pled with women, “Authentic love does not devalue another human being. Authentic love does not silence, shame, or abuse. If you are in a relationship with someone who does not honor or respect you, I want you to know that you are worthy of love. Please reach out for help. Your voice will save you.”

Why should you be ensnared by your empathy for a wounded, abusing man like Anastasia has? Fifty Shades is a twisted fairy tale: The abuser is saved by the victim. In real life Anastasia would most likely end up in a women’s shelter, Sam Smith’s In the Lonely Hour the soundtrack of her life. 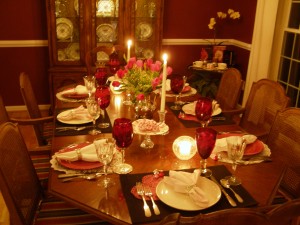 But God can bring healing and deliverance and by His grace we can make good choices. Choices that lead to joy and steadfast love. My husband and our friends gathered around a Valentine’s dinner table last Friday. Between the four couples we celebrated one hundred and eighty-one years of steadfast love.

Not because our love is so redeeming. But because God’s love is. In spite of our many failures He has given us the thing we long for most. We are so grateful and we invite others to the table.

If you or someone you know is seeking God’s wisdom on how to respond to sexual or physical abuse I  highly recommend the resources of my friend, Christian counselor Leslie Vernick, author of The Emotionally Destructive Relationship and The Emotionally Destructive Marriage. You might begin with her free resource, Q&A on Most Commonly Asked Questions on Domestic Violence.

Also, my friend, @Pam Farrel, is inviting women to a BETTER alternative to “Shades of Grey” — that is…invest in your own real live marriage! She is inviting all wives to join the 26 day Red Hot Wives Challenge and fan the flame of romance in your marriage!

Abuse should not be hidden under the guise of submission If a man is hitting, shoving, pinching, pulling, bruising, kicking, scratching, stabbing, shooting, spitting, slapping…if he is intimidating, humiliating, threatening, harassing, isolating or ignoring, if a man is cursing and berating a woman, if he is making her think it’s always her fault for things going wrong or making a woman believe that what she thinks is happening is only in her mind…that is abuse. It is certainly abuse whenever she is forced do so something sexually that she does not want to do.
Jesus calls husbands to servant leadership. This kind of violence is sin. To the man caught up in treating women this way Jesus offers forgiveness and healing. You also need to lift your voice and seek the help you need. May we all use our voices to help anyone trapped in the cycle of abuse.
Lael Arrington
Faith and Culture: Live Wisely l Love Well
www.laelarrington.com
Comment4 | Share | Tweet | Share | Pin It | print | email
Categories: Culture Shift/Hot Topics, Movies TV Net

4 thoughts on “Fifty Shades of Blue”