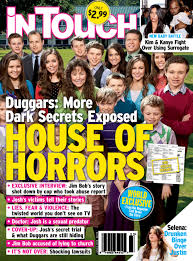 Imagine if *you* were Jim Bob or Michelle Duggar. Imagine the InTouch reporters and editors who broke the story on your son’s dishonoring innocent young girls turning up at your door and asking you for a personal interview. Now imagine that you gather your tribe together and knock yourselves out to serve them dinner. And afterwards you serve up coffee and strawberry shortcake and sit down to answer at least a few of their questions.

There’s a great precedent for such outrageous kindness. It’s what Christians have been famous for through the ages. Consider church father Polycarp (AD 69-155). When a cohort of Roman soldiers arrived to arrest him and take him to be judged in the amphitheater in Smyrna, Polycarp calmly greeted them. Noting they must be tired, he asked them if they would like to refresh themselves with food and drink while he took the hour to pray.  They agreed and he accompanied them without protest to his death.

And then there was Jesus.

To Champion the Common Good

First, we cast a vision of how God’s way can be good for everyone. Culture expert Andy Crouch has given a Q talk (like a Christian TED talk) on “Religious Freedom and the Common Good” which has challenged me to move beyond the “us vs. them” mentality. I highly recommend it. (Although when I watch “them” savage “us” for what we believe lately I tend to forget how much I like it.)

The first most basic freedom is freedom to hold to our beliefs without being threatened or coerced. Especially our beliefs about God and truth and goodness. To threaten someone, “convert or die,” to say they simply must change what they believe, assaults their human dignity. “The common good has always been anchored in the dignity of each person, created in the image of God,” says  Andy.

The way of Jesus has always been the way of principled persuasion. Not coercion. (One of the many differences between Jesus and Mohammed.)

In America, when our views differ we try to persuade. When persuasion fails we have a choice: ridicule or respect. I’ve deleted some Facebook comments from Christians lately who are slicing and dicing outsiders. Jesus dished out harsh words, but always against “insiders” claiming to know God and lead others in their faith, when in fact their hearts were far from him. They were consumed with protecting their power and their place.

Jesus did call Herod a fox once. But I think Herod probably took that as a complement.

When we look for the image of God in another we treat them with kindness. As far as it depends on us we’re at peace with them. Helping our neighbors flourish. We are called to be peacemakers in the midst of a great clash of our most basic beliefs.

This can be hard for me. For you? When I am attacked and accused I struggle to refrain from attacking and accusing in return. Just ask Jack after some of our arguments. And when my whole group is attacked and becoming a shrinking minority I not only want to verbally slice and dice, I feel fear.

This is a great time to read the stories of the early Christians. They prayed and faced the lions.

Ignatious, arrested in Syria and taken to Rome wrote ahead to the churches on his route, “I write to the Churches, and impress on them all, that I shall willingly die for God, unless you hinder me. I beseech of you…Allow me to become food for the wild beasts… Let fire and the cross; let the crowds of wild beasts; let tearings, breakings, and dislocations of bones; let cutting off of members; let shatterings of the whole body; and let all the dreadful torments of the devil come upon me: only let me attain to Jesus Christ…Him I seek, who died for us: Him I desire, who rose again for our sake.

In the face of fear let’s choose dignity over whining. When have we ever seen Jesus or Paul or Polycarp whining? As the persecution mounts let’s not play the victim card. Yes, we are called “haters.” Nothing new under the sun. When Emperor Nero decided to scapegoat the early Christians for the fire that devastated Rome he called them “haters of humanity.”

When the Christians in the book of Acts began to be persecuted they did not pray for God to take the persecution away. They prayed, “Lord, look upon their threats and grant to your servants to continue to speak your word with all boldness, (Acts 4:29).

Bold peacemakers may be vulnerable, but they don’t whine. They don’t project fears of going to jail, or losing their position or their place on Facebook walls. They don’t celebrate or share the outrage, even if they agree in substance. Because the way we express our beliefs can matter more in today’s culture than what they believe.

They befriend and beseech. They appeal to others “by the mercies of God.” They wipe the dust off their feet and move on. They put on the armor of God, Christ before them, Christ behind them, beneath them, above them; they lean into Jesus and work for the common good, which includes the Duggars and Bruce/Caitlyn Jennar.