Planned Parenthood supporters are leaning on congress and the media to kill the story of what’s really going on inside America’s abortion trade.  Reminds me of how England’s  slave ship owners did *not* want the Brits to see what went on inside the slave ships. We are living in Wilberforce times, no? 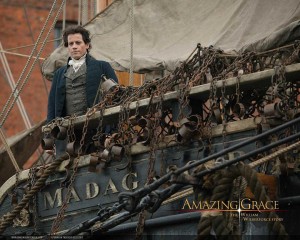 William Wilberforce was the British Member of Parliament who led the fight to abolish the slave trade. If you haven’t seen Amazing Grace, the 2006 movie about that struggle, now would be a good time. Especially to see the scene where Wilberforce has arranged for a pleasure cruise of British lords and ladies to pass by the moored slave ship Madagascar. Watch them recoil at the chains and manacles draped across the stern that had recently bound its human cargo. Imagine the stench as they hold their noses.

Ioan Griffudd as Wilberforce calls out from above the manacles, “I want you to remember that smell… remember the Madagascar… remember, God made men equal.”

Wilberforce and his friends in Clapham Circle feel compelled by their love for God and each person he created to not just tell but show the truth about slavery. Thanks to them and the encouragement of Prime Minister William Pitt (played by Benedict Cumberbatch), eventually things change. But only as the public becomes more and more aware of the abominations that are out of sight/out of mind.

In addition to the PP supporters who want to keep hiding the truth from public outrage and legal investigation, I’ve heard too many  conservative newscasters and friends say they do not recommend watching the Planned Parenthood videos because they’re too graphic. Please don’t follow their advice. Here’s why…

It would be like saying don’t read the crucifixion of Jesus or the books of Jeremiah, Lamentations or Ezekiel. They’re just too graphic.

The church through the ages has shown that we are a people who can handle the truth. We can confront the darkness and offer grace and hope in the deepest pits of human suffering.

Ours is a tradition of bold, prophetic voices who speak truth to power. We know that sometimes we need to be appalled. Shaken out of our apathy or generalized concern that does not translate into actions that matter far more to God. We stand in a long line of believers who read Scriptures like Proverbs 24:11-12 and ask God how he would have us respond:

Rescue those who are being taken away to death; hold back those who are stumbling to the slaughter. If you say, “Behold, we did not know this,” does not he who weighs the heart perceive it? Does not he who keeps watch over your soul know it, and will he not repay man according to his work?

With these videos we’ve been handed the truth on a platter that took years of investigative journalism to prepare. It is being served to us by thoughtful pro-life people who have risked much and who are being slandered and threatened with prosecution each day these videos are still available. Just last night a legal attack succeeded in restraining a planned video release. So today we see the rush release of another video (below) before the window of opportunity may close.

Now is the time to not simply admire a man like William Wilberforce, but be inspired by him. What can we do to end this human suffering?

For starters, watch the videos. Then encourage others to do the same.

Stand on the stern of social media and ask passersby to…

Remember the callous indifference to discussing the sale of body parts over a glass of wine.

Remember the lab dish full of tiny hands and eyes and kidneys and the PP doctor advocating to market it in the best way to see what they can get out of it.

Remember, we have all been endowed by our Creator with life, liberty and the pursuit of happiness. Especially the least of us.

You can also pray. In your churches. Small groups. Families. Quietly before God. Bring the power of heaven into these unspeakable circumstances here on earth.

You can sign the Pro-Life Declaration sponsored by pro-life leaders.

Finally, you can reach out to teens and women in crisis pregnancies. Connect them to Online for Life or local pregnancy centers with life-affirming staff that can help them choose life for their child and obtain the long-term support they need.

It’s so simple. It requires us to pluck up our courage. And speak from a gentle spirit and a broken heart so we can invite others to be broken with us over this dismemberment and sale of innocents.

You can watch the videos below or at the website of The Center for Medical Progress (here and here). If you are concerned that they may have been too heavily edited (as any news cast usually is) you can watch the unedited footage, also available there.

(Updated from original blog post) Here is the video released August 12, Human Capital, Episode 2. Holly O’Donnell details the work she did on gathering and shipping body parts from PP and getting consent (or not) from the clients of PP:

(Updated from original blog post) Here is the video released August 4th that shows more of PP’s negotiations over the sale of body parts:

Here is the video released July 28th that shows negotiations over the sale of body parts:

Here is the video that was rush-released July 30th after a restraining order was issued against Center for Medical Progress releasing a video on a different subject. It provides more background on the negotiations shown above:

Here is the first video released July 14th, a discussion of how abortions can be managed to deliver the best “specimens”:

Here is the second video, negotiations over the sale of body parts, released on July 21st:

For such a time as this, friends…

7 thoughts on “A Wilberforce Moment: The PP videos and how you can make a difference”