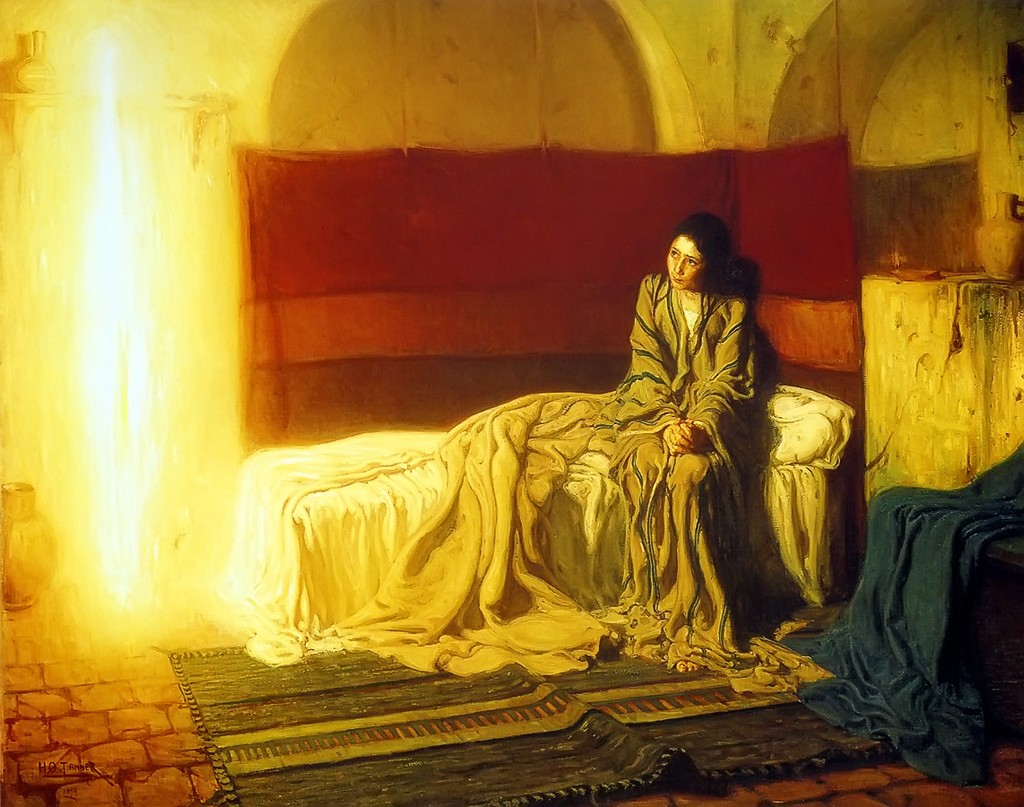 The Annunciation by Ossawa Tanner, The Philadelphia Museum of Art

I’ve often wondered if Mary was disappointed with God. It’s clear from the way she sings her famous Magnificat that her buoyant expectations do not match the unfolding reality of life as Jesus’ mother. Face to face with Mary, Gabriel made some astonishing promises. Did God deliver?

“Mary, you will conceive in your womb.” Miracle! The virgin conceived.

“You will call his name Jesus.” She did.

“He will be great and will be called the Son of the Most High.” Miracle! The incarnation of the Word, the eternal Son of God, made flesh.

“And the Lord God will give to him the throne of his father David, and he will reign over the house of Jacob forever, and of his kingdom there will be no end.” Hmm…this one is more problematic.

Mention the word “throne” and who can blame Mary for thinking of a red-blooded, political Messiah?

In her faith-lit imagination she can already see the political and social justice her son will unleash. She sings her prophetic vision to her cousin Elizabeth (from Luke 1), “He has scattered the proud in the thoughts of their hearts; he has brought down the mighty from their thrones and exalted those of humble estate; he has filled the hungry with good things, and the rich he has sent empty away. He has helped his servant Israel, in remembrance of his mercy, as he spoke to our fathers, to Abraham and to his offspring forever.” Like so many Jews, was Mary looking for Messiah to be a political leader? Someone who would throw off the yoke of Rome and the oppressive rich and bring justice to the poor and needy? Someone who would re-established David’s throne in Israel and reign forever?

We are naturally disposed to look at our problems and search for a political or social solution. Especially with primary elections right around the corner.

But God seems not quite so focused on Roman oppression or, possibly, military Islamic Jihad.

He’s focused on war, but against a larger, more dangerous enemy: A “great red dragon stood before the woman who was about to give birth, so that when she bore her child he might devour it. (Rev 12)”

Born into that cosmic war, Christ came to destroy the work of the Devil, the thief who comes only to kill, steal and destroy. The one who constantly whispers, “Did God say?’ and tempts us to doubt the goodness of God’s heart.

Herod would try to kill him, his parents would run for their lives to Egypt, his siblings would plan a family intervention for their crazy brother, most of his outer-circle disciples would desert him, the Jewish leaders would want to kill him, one of the twelve would betray him, the Romans would crucify him—Satan would try every option to devour him and think he succeeded, only for Jesus to rise again, break the power of death and sin and offer salvation to all who believe. Stunning.

When we see the way God dealt with Mary we see the beauty, the gentleness of how he deals with us:

First, no matter how outrageous, God always keeps his promises to us. He speaks from outside time, the Alpha and Omega, declaring the end from the beginning. He will partner with a willing heart to accomplish the unimaginable. Who could ever conceive of the deliverance of the human race coming through a virgin conception and birth? Who could imagine that Messiah would be God the Son emptying himself of his eternal majesty and become a vulnerable human infant?

As with Mary, our understanding of how God will keep his promises has no bearing on the fact that he will keep it. “How can this be since I am a virgin?” Mary asked. And when Gabriel told her she would be “overshadowed” by God’s power how much did she really understand? Yet she experienced it invading her body. And the symptoms of pregnancy that began soon after. Every skipped period, every inch her belly expanded was living proof of the surprising extent to which God would go to accomplish his purposes. She didn’t have to understand how, she just had to say “Yes.”

Like Mary we can trust that God’s word to us, his announcements, directives and explanations, are always completely true, even when they are not exhaustive. I’m sure Mary would have loved for Gabriel to sit down and explain to her how Isaiah 53 shows a suffering Messiah whose soul would make “an offering for sin,” who “was wounded for our transgressions…crushed for our iniquities; upon [whom] was the chastisement that brought us peace, and [by whose] stripes we are healed.” Mary may have appreciated the opportunity to count the cost of how hard it would be to live through such pain and make a more fully informed decision. But Gabriel only shared the glad tidings of great joy.

Was that sugarcoating what lay ahead? Was it misleading? Unfair?

This broken world is at war. The way ahead for Mary and us will include much pain. Yet God’s glory and our joy is the point. So he communicates with us in a way that inclines us to experience more of his glory and more joy. God knows that Mary’s and our eternal joy is worth momentary affliction. Even a lifetime of pain. (I’ve lived with the pain of rheumatoid arthritis for 35 years and counting. I do not take this issue lightly.) And the truth is: Pain ultimately accomplishes more joy. As we lean into Jesus for strength and comfort it transforms us into the kind of people that see and experience joy more readily and deeply.

Mary’s joy will be deep and eternal. What would be far sadder would be if Mary or you or I missed an eternity of greater joy because we couldn’t trust God or were afraid of pain. All we need to know is the goodness of God’s heart toward us and the certainty of heavenly joy.

In his perfect timing and gentleness God began to prepare Mary for the pain ahead. First he provided for her an escape from the whispers and gossip in Nazareth to the deeply empathetic friendship of her cousin Elizabeth. Gabriel reveals to Joseph that this will not just be a Messiah who will rule but tells him to “call his name Jesus, for he will save his people from their sins.” After Jesus was born and Mary and Joseph presented him in the temple, Simeon warned her, “this child is appointed…for a sign that is opposed and a sword will pierce through your own soul also.” In his mercy God began to carefully manage her expectations. He tells us as much as we need to know to navigate the pain and still rely on him, not our knowledge of the outcome.

In his perfect timing God will absolutely fulfill his promises. Depending on your eschatology, you may believe that Jesus has already been given the throne of David in a heavenly or spiritual sense, and/or you may believe he will be given it in an earthly sense in the future. But we know that ultimately, in the new Heavens and Earth, God will keep Gabriel’s final promise to Mary just as literally as he has fulfilled the others.

As we look to an election year ahead we see one more important way that God deals with us so gently and beautifully. No matter how much time and energy we invest in pursuing political and social justice, the spiritual war to defeat sin and Satan is always the greatest, most profound struggle. It is the most costly and difficult to win.

I am so grateful that Jesus came first to defeat the enemy and save us from the penalty and power of sin. The war is already won. Because it is won we should ACT. We should live as partners with God in his redemptive work.

Like Mary we should say “Yes” to Jesus’ commands “to bring good news to the poor…to bind up the brokenhearted, to proclaim liberty to the captives, and the opening of the prison to those who are bound, to proclaim the year of the LORD’s favor, and the day of vengeance of our God; to comfort all who mourn.” Some of this we need to do socially and politically. And yes, we should be good stewards of our citizenship and engage in the electoral process.

But Christmas reminds us that the greater calling, the greater gift, is salvation. The best way to bind up the brokenhearted and comfort those who mourn is one on one, the way Jesus—Emanuel–comes to us. And for that, we love him. Merry Christmas.

One thought on “Did Gabriel sugarcoat the truth to Mary? The beauty of how God deals with us”