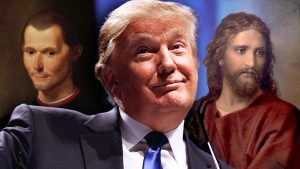 If leaders treat people with contempt, insulting and belittling them, and violating their dignity, can it ultimately serve their best interest? Can it best serve the people who follow him or her? Can leaders hit others back hard and win both power and the hearts of the people?

Donald Trump lives by the advice he dispensed in his best-selling business book The Art of the Deal: “Fight Back–always hit back against critics and adversaries, even if it looks bad.” He has run his campaign under the banner of “You hit me, I hit you back twice as hard.”

For example, back in August, at the first Presidential debate, Fox News anchor Megyn Kelly asked Donald Trump some pointed questions about the way he treated women. What many (most?) journalists considered a fair question Trump considered unfair and hit back hard with an unrelenting stream of negative tweets against Kelly. In January, when Fox refused to remove Kelly from moderating the Iowa debate, he dropped out and held a competing event.

BILL O’REILLY: In your Christian faith, there is a very significant tenet and that’s the tenet of forgiveness. I think you should forgive not only journalists who come at you in ways you don’t like, but I think you should be a bigger man and say, you know what? I didn’t like it and you should make that case all day long. But, I’m not going to take any action against it. You know, don’t you think that’s the right thing to do?
DONALD TRUMP: It probably is. But, you know it’s called an eye for an eye I guess also. You can look at it that way.
O’REILLY: No, no, no, no. That’s Old Testament. If you’re the Christian, the eye for the eye rule goes out. Here’s what it is: turning the other cheek (taps his cheek).
TRUMP: You’re taking this much more seriously than I am. I’m not taking it seriously.

The apostle Peter added, “…Christ also suffered for you, leaving you an example, so that you might follow in his steps. When he was reviled, he did not revile in return; when he suffered, he did not threaten, but continued entrusting himself to him who judges justly.” 1 Peter 2:21, 23

The conventional wisdom of Jesus’ day was, “if you hit me, I hit you back equally hard.” But Jesus clearly showed…this is not my way. This is wrong. This is not the way of truth and grace.

We’ve seen the reasons why play out before our eyes. They are many, but let’s focus on two. First of all, hitting back leads to escalating cruelty, alienation and the desire for revenge.

Most American election cruelty is rendered by words. Death by a thousand cuts. If you revile and belittle and mean it, you wound people and make them want to withdraw from you. Relationships break down. Unity is destroyed. You might alienate the very people you’d like to help you win.

In a sit-down interview in New York with USA TODAY’s Kirsten Powers, Trump said as much: “There are people I have in mind in terms of vice president… I do like Marco. I do like (John) Kasich… I like (Scott) Walker actually in a lot of ways. I hit him very hard. … But I’ve always liked him. There are people I like, but I don’t think they like me because I have hit them hard.”

This quote also points to the second reason why hitting back may not be the path of winning: If you revile and belittle your opponents and you really don’t mean it, you drain words of their meaning. How can people believe what you say? You break faith with people. Trust deteriorates. Again, relationships break down.

Did Trump mean it when he attacked his Republican opponents so fiercely? In the Powers interview “Trump said his previous battles with Rubio and other GOP rivals were part of ‘the crazy business’ of politics. “ Was he “telling it like it is”? Or isn’t? Who can know? If he didn’t mean what he said, how can we trust what he tells us?

The way of Jesus protects the dignity of each individual made in the image of God. It nurtures trust. It protects relationships. Jesus showed that the ruling powers could hit him so hard he could suffer and die and yet overcome and even redeem their hits. The ultimate Prince demonstrated that good holds the greatest power and brings the greatest win.

Over and against the way of Jesus is the way of Niccolo Machiavelli, the author of Vladimir Lenin’s favorite book, The Prince. Written in 1513 for aspiring leaders, Machiavelli rejected the way of Jesus. If men were good it might work. But men are wicked. So, he contended, an aspiring leader would need a different playbook. For the prince who must operate in the world of realpolitik, evil would often be more effective than good.

It is better to be feared than  loved, if it can’t be both.
Keeping your word is foolish if it brings you harm. Others will break faith with you so you should feel free to break faith with others.
The end justifies the means. (original to Machiavelli. For example, slavery is cruel, but if it provides a “great good” [cheap labor], then it’s wise to support it.)
Don’t worry about being good. Just focus on appearing to be good. A Prince should be “a great pretender and disassembler.” The Prince should appear to be “all mercy, all faith, all honesty, all humanity, all religion.” Especially religion.

In other words, an aspiring leader should appear to be religious, but don’t take it seriously.

If you are okay with cruelty and alienation, lying and pretense, then take the way of Machiavelli. Hit back twice as hard. Make people fear you. Then ask if what separates you from leaders like Lenin or Stalin or Saddam Hussein is a difference in kind…or only degree. Ask if that is why your un-favorability ratings are sky high. Or if that might be why Trump couldn’t win in Manhattan among the people who know him best. (Kasich did)

It remains to be seen if you can be elected President of the United States. But even if you are…

Machiavelli bet that there was no God or heaven or hell. No final reckoning for choosing evil. There was only the reality that, when it comes to winning, evil can be more effective than good.

If you really want to win by hitting back hard, what are you willing to lose?

If we support a leader precisely because he or she will “get things done” by hitting back hard, does that make us complicit in the hitting?

4 thoughts on “Is Hitting Back “Twice as Hard” Really the Way to Win?”