There’s this scene at the end of the movie of The Truman Show where Jim Carrey, who plays the unwitting star of a reality show about his life, finally figures out that none of it is real. Like the voice of God speaking out of the “sky,” The Truman Show producer tries to persuade him to stay, “You were real,”…that’s what made you so good to watch.”

Truman/Carrey pauses at the foot of a stair case leading up and out of the giant dome of his set, then takes his final bow and makes his exit. The millions who have watched him since he was a toddler explode into cheers, hi-fives and laughter. In the control room the order is given, “Cease transmission.” All the TV sets go to crackling “snow.”

Two security guys eating pizza look at each other. “What else is on?” asks one.
“Yeah let’s see what else is on.”
“Where’s the TV Guide?”
And the credits roll.

Because the show is over. Transmission has ceased. Time to change the channel. Those of us who have followed the 2016 Great Republican Presidential Race Reality Show find ourselves in the same place. Some breathless with the thrill of victory. Others incredulous over sixteen defeats. Millions of us a bit deflated that the primary “show” is over.

Many of us are trying to parse how such a promising field with so many good candidates has ended with the choice shaping up before us.

One big reason, I think, has much to do with how we seem to have reached a cultural tipping point: a candidate’s ability to entertain us is critical to his or her success. This is different than a candidate’s ability to inspire us. When Ronald Reagan, a professional actor, ran for president his acting skills helped him inspire voters and convey sturdy policy substance (see the clip below).

But we’ve come to a point with Donald Trump that “entertainment has conquered reality.’ When Wisconsin governor Scott Walker was one of the first strong hopefuls to drop out of the race I wrote this back in September:

Why such low numbers for Mr. Walker? My theory, and it pains me to offer it: He is not entertaining enough. 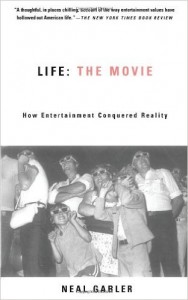 “Entertainment” is taken from the Latin words inter “between” and tenere “to hold.” As Neal Gabler has documented in Life: the Movie: How Entertainment Conquered Reality, “Entertainment is mainly about fun. It pulls us in, holding us captive, taking us deeper into our own emotions and senses, before releasing us. [Think of how you slowly re-emerge as you walk out of a movie.] Entertainment is Plato’s worst nightmare.”

Think about it. For the most part I think, this is why today’s candidates are succeeding or failing. They have learned how to manipulate fear and pleasure. Or not.

In today’s postmodern culture thinkers are out. Feelers are in. Speakers with more emotional charge and passion tend to be more entertaining. Emotions are contagious. The candidates that can best project contagious emotions, especially emotions of fear, pleasure and the kind of outrage that resonates with the frustration of voters, are more entertaining and rising in the polls. That and the ability to confound and shock the public. (The point that VeggieTales creator Phil Vischer hilariously makes in this video:)

Look at his values. Hopefully a reflection of the King of Kings’. Look at the skill for the job. Can they cast a vision of where we need to go and accurately count the cost of getting there? Do they have a track record of solving problems, good judgment and decisiveness? Will they fight for what is right? Will they break all the “bruised reeds” in the process?

A good and great nation seeks a leader with strength clothed in empathy, wisdom, a servant’s heart, and maybe even, in today’s culture, a certain facility with playing the celebrity game. But Heaven help us if we tune in to be entertained or elect a Manipulator in Chief.—September 29, 2015

Over seven months later, here we may well be. Heaven help us.

If he is elected, may God surround Donald Trump with wise, steady counselors and incline his heart to listen.

May he show grace to him, as he showed grace to King Saul of Israel. Even though the Israelites rejected God as their king, God told Samuel, “Obey their voice and make them a king.” Saul was anointed king in response to a populist outcry. God even gave him “another heart” and turned him into “another man” who would lead the Israelites to great victories over their enemies for years.

But Saul had this tendency to set aside the voice of God because he listened to the voice of the people. He was really dialed in to the polls. Things did not end well for him. Yet he set the stage for King David to come to the throne. God can redeem anything.