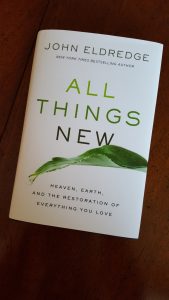 You probably saw hundreds of thousands take to the streets in protest for Right to Life and women’s empowerment last weekend. On Capitol Hill the Democrats in their trench shouted, ‘Protect Immigrants!” while Republicans in theirs shouted, “Protect citizens! Protect the military!”

And we watch. War-weary, just wanting these people to do their jobs and run the government. The shutdown shut down, but the “cultural war for the soul of America” as Pat Buchanan first described it, continues—this daily battle over “who we are and what we stand for as Americans.”

Did you hear any of the speeches from the Senate floor? It was as if Democrat Schumer and Republican McConnell each described the shutdown from totally different planets. As my gut tensed I wondered, “How will this war ever end?” It used to be that the war was fought during election season and now it’s fought every day.

“…and the government will be upon his shoulders and his name shall be called Wonderful, Counselor, the Mighty God, the Everlasting Father, the Prince of Peace.” I’ve been reading John Eldredge’s new book, All Things New, so a technicolor vision of the new heaven and earth has been looming large lately.

The bickering on TV faded to images of Jesus shouldering the government, running it from his throne. A king who is also a wonderful counselor and gifted healer, whose word holds sway because he who began a good work in us will have completed it (Phil 1:6). We will have been delivered of our selfishness and rebellion and will have been made perfect (Heb 12:23). Not only will we clearly see how incredibly good and life-giving his decisions are, but we will joyfully support each one in perfect unity.

That brief envisioned truth made such a difference. I relaxed. Frustration and war-weariness ebbed away. It was the perfectly natural result of what I’d been reading:

If you believed that a great and glorious goodness was coming to you—not in a vague heaven—but right here on this earth, you would have a hope that would see you through anything…an anchor for your soul “reaching past all appearances to the very presence of God” (Heb 6:10 MSG).

The challenge is to make our hope real and meaningful. Take it down from our heads into our hearts where it really transforms our discouragement and anxiety in the moment. This is John’s great gift. Somewhat like C.S. Lewis, God has given him an extraordinary imagination grounded solidly in Biblical truth and the ability to craft it into powerful, heart-grabbing language. Reading it has been like watching a movie about heaven.

Not a movie like 90 Minutes in Heaven (reviewed here), a grand reunion outside the gate, suffused with lights and music. But a macro panorama of the new earth and the new Jerusalem and close-ups inside the gates in stunning micro detail.

Unpacking the words and stories of Scripture, John moves us in the direction of what “no eye has seen nor ear heard” and helps us think deeply about the beauty of a renewed, redeemed earth; restored and healed relationships, living forever young and wholehearted; the unapologetic anticipation of our rewards (no false humility expected or allowed); the overthrow of evil; what it will mean to reign with Christ; the “forbidden attitude,” namely, getting tired of waiting, and the difference it all makes.

Rather than try to tell you a neat summary of the book, here are my ten favorite quotes so you can taste it and see:

For too long Christians have misunderstood their destiny. We have thought we would leave the earth we love and go up to an ethereal heaven somewhere. Not so…[But rather] “the earth you love—all your special places and memories—is restored and renewed and given back to you forever. [“Heaven comes down to us”—N.T. Wright]

Think of it—to be wholehearted. To be filled with goodness from head to toe…think of all you’re not going to have to wrestle with anymore…fear, anger, the compulsions, the battles to forgive, that nasty root of resentment. No more internal civil wars, no doubt, no lust, no regret, no shame, no self-hatred, no gender confusion…”

God seems to be of the opinion that no one should be expected to sustain the rigors of the Christian life without very robust and concrete hopes of being brazenly rewarded for it…houses, cities, kingdoms.”

How wonderful it will be to see Jesus Christ vindicated, after so many eons of mockery, dismissal and vilification. Our beloved has endured such slander, such mistrust, and, worst of all, such grotesque distortion by the caricatures and religious counterfeits paraded in his name. All the world will see him as he is…see him crowned King.

Imagine a world without evil people, where everyone loves God and overflows with his holy love. You look to your right and left and you only see people you can trust completely.

Not everyone wants the joys of heaven-on-earth for the simple reason that they do not want Jesus to be King.

People want to know, ‘How is God going to make it all right? How is he going to redeem all the suffering of this world…in my own life?’ The answer has never been, ‘By this new ministry initiative!’ The answer has always been, ‘At the renewal of all things.’

*Every time disappointment strikes again, you pray, ‘Jesus, I give my heart to your kingdom; I am made for your kingdom and nothing else will do.”

And finally…“One morning you will wake…as you open your eyes you will realize how young and whole your body feels. No tormenting thoughts will rush in to assault you. You will realize that your soul feels young and whole too. As you sit up and look around the bedroom filled with light, you will hear the sounds of laughter and running water outside and you will know–it’s going to be a wonderful day.”

John has produced a film that captures this scene perfectly. I shared it with Jack when he was preparing his first Advent sermon on hope.

To conclude his sermon Jack read some of these quotes. The band closed with “O Come All Ye Faithful” and Jack returned to the front, as is his custom, to close the service. He had decided not to show this video, but rather describe it in his own words. He began to weep as he described the waking and the hand that worked perfectly. Of course he was thinking of me and my rheumatoid arthritis. And looking at me. His were not the only tears.

Friends, when I first read how John described our hope of all things new in The Sacred Romance, it changed my life. Pulled me out of duty and resignation and set me on the path of a joyful, kingdom-building life. Whether you are stuck or hurting, burning with frustration or world weary, I encourage you to enjoy the “deep magic” of this book that dispels the “evil enchantment of worldliness” and torches our affections for what awaits.

Whether they come unbidden or with intentionality, when these envisioned truths fill our hearts, we have a real and certain hope that will change the way we feel, the way we live.

2 thoughts on “World-weary? “All Things New” torches our hope”