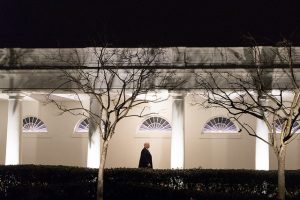 In December Dr. Bandy Lee, a Yale Psychiatry professor and the editor of a book, The Dangerous Case of Donald Trump: 27 Psychiatrists and Mental Health Experts Assess a President, was invited to address congressmen and women about accusations that Trump was unfit to hold the office of president. And when, in a tweet to Kim Jong Un, Trump boasted about his “bigger nuclear button” she released a statement:

“We write as mental health professionals who have been deeply concerned about Donald Trump’s psychological aberrations…We believe that he is now further unraveling in ways that contribute to his belligerent nuclear threats.”

The movement began with a petition, first circulated as his campaign began, with now almost 70,000 signatures of health professionals who have violated their professional ethics because they believe they have a “duty to warn.”

While most are focusing on attacking or defending President Trump’s mental stability, I was struck by what a corrosive assault it must be to the man’s soul to see this conversation gaining momentum. How should we respond?

I was reminded of similar charges against Brian Wilson, musical genius and founder of the Beach Boys rock group. Composing and producing under enormous pressure (3-4 albums a year) Wilson rode the new 60’s wave of drug use to enhance his creativity and deal with an abusive relationship with his father. When he crashed physically, psychologically and spiritually for a second time he was forced into the care of a psychologist who over-medicated him and exacerbated his problems. To rescue him, his brother Carl asked the court to declare him unfit and appoint a conservator.

Responding to hours of explanation, Brian finally drug a chair into a corner, sat down and began to weep. He felt like he “was being stripped of his dignity and rights as a human being.” “I know I’m a little brain-damaged,” he said, “#%$ I know. But I’m not unfit.”

Accusing Trump of being mentally unstable and unfit goes to the deepest question in any man’s heart, “Do I have what it takes?” and plasters a resounding “No!!” all over the headlines and social media for the world to see.

Trump is not impervious to the attacks as we saw when he defended himself last weekend at a press conference at Camp David, “”I was a very excellent student, came out, made billions and billions of dollars, became one of the top business people, went to television and for 10 years was a tremendous success…Ran for president one time and won.” The Republican leaders standing behind him looked as uncomfortable as I felt.

He looked much better when he let the press cameras do the talking on Tuesday in a bipartisan meeting to hash out immigration issues. Viewers who watched the President running the meeting could only wish that their low-energy work meetings that bog down into rabbit trails and long-winded comments could be run as well. Trump was quick and sharp at respectfully eliciting opinions from all sides while moving the agenda briskly forward and dispelling tensions with easy humor. He looked highly fit for that essential component of his job, proving the wisdom of “Show, don’t tell.”

But then he had to boast about all the positive response to the meeting video.

How do we respond to Trump’s trampling of civility, slash-and-burn tweets, the challenges of these mental health professionals and the damage it’s inflicting on the president and the nation?

In their book Lee and her contributors discuss the negative consequences of Trump’s campaign and presidency on the nation. For example they cite reports of an uptick in bullying and boorish behavior in schools and the workplace. They are genuinely afraid he will push his “bigger button” and ignite a nuclear war.

As a follower of Jesus we have to put political loyalties aside and evaluate President Trump through the lens of God’s Word. We have to be honest. Rarely have we had such an opportunity to see and feel the consequences of violating ethical standards, good manners and God’s commands in public office so constantly magnified under the media microscope.

God warns us about boasting: “But if you have bitter jealousy and selfish ambition in your hearts, do not boast and be false to the truth. [James 3:14] And vengeance: “Beloved, never avenge yourselves, but leave it to the wrath of God, for it is written, “Vengeance is mine, I will repay, says the Lord.” (Romans 12:19) Likewise coarse jesting, untruthful exaggerations and ceaseless put downs (per The Atlantic, asking people who had met with Mike Pence, “Did he make you pray?)

All these patterns were on display in the Republican primary. People, Christians, voted for him anyhow.

So here we are, trying to respond in ways that honor God. I’ve wondered if the power of President Trump’s negative example just might also be having a positive impact. We can feel the deep neediness behind those comments. See the hurt they inflict on others. See the constant march of pride that must skewer others so he will be exalted and given credit. It repels us.

We see and read about the exasperation of his allies and the pain and moral indignation of those he attacks. The polls show his popularity is parked in negative territory. The message is clear: If we want to love others and be loved in return, these are patterns and choices we need to avoid.

This is what naturally happens when we disregard God and his commands. When we swim upstream against the Universe created by a loving God. People may deeply appreciate most of what you do, but they don’t unreservedly like you. You don’t feel like a safe, trustworthy person.

Does all this mean he is unfit for office? For conservatives the great irony is that he is appointing people who hold positions closer to a Biblical worldview on social issues than previous administrations. And filling the bench with judges who take an originalist view on the constitution. Clearly the economy is soaring under his direction. Israel is being supported. Isis has been routed. Kim Jong Un is coming to the negotiation table and South Korea is giving the President credit. His bad-boy behavior, especially on Twitter, disgusts. But his governance on many fronts is solid.

As reported in Newsmax, Harvard Law Professor Alan Dershowitz believes that Yale Professor Bandy Lee’s comments that the President is dangerous are in themselves dangerous:

Meanwhile, the 25th Amendment is designed to be used to remove a president who is incapacitated.

“[It] is designed for when somebody has a stroke or somebody is unconscious, perhaps what happened when President [Woodrow] Wilson was president,” said Dershowitz. “He had a serious stroke. It’s not designed for differences about a person’s emotional makeup.”

In addition, Dershowitz said that politically, the 25th Amendment likely would not be invoked as the vice president would have to do that, and if the president disputed the matter, then it would have to be voted for by two thirds of both houses of congress.

As Christians we have two solid commands that should shape our response to President Trump:
First, we are to honor him. Through the apostle Peter God commands us to “Honor everyone. Love the brotherhood. Fear God. Honor the emperor. (1 Peter 2:17) After having said “Honor everyone” it’s as if Peter adds “(even) the Emperor,” who at the time was Nero.

Each person is made in the image of God. Governing authority is instituted by him. We respect the image and the office even if we deplore the behavior.

It doesn’t mean we shouldn’t criticize, but our Facebook posts and conversation shouldn’t be dripping with sarcasm or ridicule. When a friend posted something that was way over that line on Facebook, I messaged her privately. I told her that Jack had been preaching on the Peter passage just that week and, with all the gentleness and respect I could muster, I asked her simply, “What do you do with Peter’s command to “Honor the Emperor”? She did not respond to the substance of my question or Peter’s command. She unfriended me.

Secondly, Paul tells us, “I urge that supplications, prayers, intercessions, and thanksgivings be made for all people, for kings and all who are in high positions, that we may lead a peaceful and quiet life, godly and dignified in every way. (1 Timothy 2:1-2)

So we are godly and dignified in our criticism and we pray for President Trump. We see his needs. What must it be like to deal each day with the slings and arrows of ridicule and growing ranks of mental health professionals who insist you are mentally unfit. Who want, as Wilson mourned, to strip you of your “dignity and rights as a human being”? The “unfit” accusation is serious business. Not only because it threatens your job, but because it threatens your soul.

We pray for President Trump to get up every day, draw on the strength of Christ, and push through the greatest onslaught of institutional and individual ridicule ever leveled at an American President. We pray for him to follow the way of Jesus, in whom he professes faith. We pray for him because we know that we are fellow travelers, great but fallen, a mixed bag of motives, desperate to be pitied by God and saved by his amazing grace.

And we trust God to work through him for our good and his glory. Just like we did with President Obama. Just like Peter did with Emperor Nero.