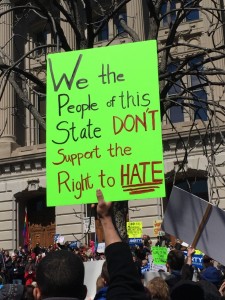 Suppose you are an Indian who runs a vegan café in Indiana. (You are Jainist and your faith opposes the taking of animal life.) And suppose a customer wants you to cater their wedding with your amazing vegan creations, but please, just put some chicken wings on the side for non-vegans.

If you refuse this service should the offended customer (backed by the NRA, Ducks Unlimited and the force of government) see you have to shut down your café and lose your livelihood because of the heavy fines imposed? Would it make sense to justify this because you clearly “hate” and are prejudiced against meat-eaters?

Do you really want the government to force you to violate your core beliefs? This is the question at the heart of the intense debate in the wake of this past weekend’s social media campaign as well as last summer’s Hobby Lobby Supreme Court decision.

And here is the rock-bottom truth lost in the media frenzy:

The Indiana law doesn’t say anything @ gays and lesbians.

It says that if the government is going to force people to violate their core beliefs they should have a good reason. Otherwise they should leave them alone.
The law sets up a test for what makes for a good reason. The courts decide.

1. Daniel, what was your role in the Hobby Lobby case?
I’m an attorney with the Becket Fund for Religious Liberty. The Becket Fund represented Hobby Lobby and its owners, the Green family, who started their business in a garage and grew it to become one of the nation’s leading arts-and-crafts retailers.

The Greens are sincere Christians and run Hobby Lobby to reflect their faith. But a federal agency passed a regulation forcing Hobby Lobby and the Greens to provide insurance coverage for potentially life-terminating drugs and devices, contrary to the Greens’ religious convictions. If the Greens didn’t provide the coverage, they faced annual half-billion-dollar penalties from the IRS.

2. Why did Hobby Lobby wind up in the Supreme Court?

Because the federal government refused to accommodate the Greens’ religious beliefs and find another way to distribute its drugs and devices. The government took a very aggressive position, arguing that family businesses like Hobby Lobby and family business owners like the Greens lose their fundamental rights to religious liberty when they operate as a corporation.

As the government admitted to the Supreme Court, this extreme position would—for instance—allow the government to force some Catholic hospitals to perform late-term abortions.

The argument also didn’t make any sense: the government admitted that corporations have religious liberty (as it had to: many, if not most, houses of worship are corporations), and it admitted that certain types of businesses do, too (like kosher delis).

So it was weird to think that for-profit corporations didn’t have religious rights. So weird, in fact, that only 2 of the 9 members of the Supreme Court accepted the government’s position on that argument.

3. Why did the Supreme Court rule for Hobby Lobby?

Because that’s what the Act required. Remember, RFRA is a two-step dance: Hobby Lobby did its side of the dance, with even the government admitting that its religious beliefs were sincere and the Court unsurprisingly finding that a half-billion dollar annual fine is a substantial burden on those beliefs.

So then the government unsuccessfully tried to do its part of the dance. The majority of the Court ruled that even if the government had a very important objective, it could try to accomplish that goal in ways that don’t violate the Greens’ faith.

4. In 1993 President Clinton signed the Religious Freedom Restoration Act (“RFRA”). That law was the basis for the Supreme Court’s verdict in the Hobby Lobby case. It’s also the basis for Indiana’s new law that is triggering #boycottIndiana. What does that law say?

It’s pretty simple. The law says that, because Americans’ religious liberty is important, the government shouldn’t punish them for following their sincere beliefs unless it has an extremely good reason.

The Act, or legal principles almost identical to it, has been in place for over 50 years. It works very well. So well, in fact, that most Americans had never heard of it until the Hobby Lobby case, when a government agency found the Act inconvenient and tried very hard to get around it.

On the federal level, the Act is over 20 years old and simply reversed a bad 1990 Supreme Court decision that had abandoned a constitutional version of the Act’s decades-old balancing test.

The Act was passed by overwhelming bipartisan majorities (in all of Congress, there were only 3 votes against it), and triumphantly signed into law by President Clinton. States have been adopting versions of the Act because a later Supreme Court decision limited the federal Act to apply only to the federal government, not states. Indiana is the 20th state to adopt its own “RFRA.”

5. How is the Indiana law different from the federal law?

The differences are very minor. The core balancing test is essentially the same. The two differences that some commentators are complaining about are that Indiana’s RFRA explicitly protects (1) for-profit corporations with sincere religious beliefs, and (2) believers who are sued by other private citizens for violating a state law.

But, as the Supreme Court ruled in Hobby Lobby, the federal RFRA always included the first protection. And President Obama’s Department of Justice, along with most federal appellate courts to consider the issue, agree that the federal RFRA provides the second protection.

6. Do you think it will promote prejudice against gays?

No. RFRA combats bigotry by ensuring that sincere religious believers without political clout aren’t unnecessarily trampled by the government. For instance, the two most prominent beneficiaries of Texas’s RFRA have been a politically inconvenient Christian homeless shelter and a Santeria priest.

Without RFRA, religious minorities and other believers that the government ignores or refuses to accommodate would be at risk. With RFRA, they have a fighting chance. RFRAs protect religious liberty, not prejudice.

And you don’t have to just take my word for it. As I mentioned earlier, RFRA-like laws have been on the books for over 50 years, and 20 states all over the country have their own RFRA.

There’s not a single word about sexual orientation, gays, or lesbians in any of those RFRAs. Nor is there a single case where a religious business owner has successfully used RFRA to deny services to someone because of their sexual orientation.

7. What about cases like the religious photographer who doesn’t want to help celebrate a gay wedding by snapping pictures for the wedding?

The photographer case, where a photographer was willing to serve gays and take individual portraits but simply objected to participating in a religious ceremony, is a far cry from the wild hypotheticals that RFRA opponents are pushing.

Instead of real-life situations, they threaten that adopting RFRAs means that gays will be denied access to hospitals or refused a chance to buy a meal. But, again, nothing like that has ever happened, there’s no reason to think that it ever will, and even less reason to think that such an outlandish RFRA claim would ever succeed.

Such non-existent bogeymen are trotted out at legislative hearings and in the media because anti-RFRA groups are afraid that the photographers would win actually RFRA’s balancing test. After all, this is a free country, and we’ve never allowed the government to force people to personally participate in a religious ceremony, particularly one that violates their faith.

That’s why most Americans side with the Christian photographer against the oppressive government. Photographers—like florists, bakers, and other wedding-related businesses—are widely available, and there are many who broadly advertise their willingness to celebrate any wedding.

With so many alternatives, it’s hard to see what compelling reason the government could have to target a handful of small religious family wedding businesses, threatening both their living and their life savings.

The bottom line is that flesh-and-blood Americans—like a Native American boy expelled from school for his long hair, Jewish prisoners denied access to kosher meals, and a Sikh woman fired by the IRS for wearing religious attire—have been and are being protected by RFRA laws. Where those protections don’t exist, they should. We shouldn’t abandon our commitment to religious liberty for baseless scaremongering.

8. How would you respond to someone who is thinking about boycotting Indiana?

Private citizens can boycott whoever they want. And that’s part of the point: we shouldn’t allow the government to start dictating what you can or cannot believe. We understand this with the First Amendment’s free speech protections, which guard even very offensive speech.

RFRAs simply, and much more modestly, discourage the government from punishing private religious people for being who they believe God wants them to be—whether at home, at work, or in a ministry.

People should remember that boycotting a law like Indiana’s RFRA law means they’re opposing protection for many religious minorities or politically disenfranchised religious groups that would otherwise be left defenseless against the government’s ability to trample their religious rights. This valuable purpose for RFRA is getting lost in blatantly false scare tactics. 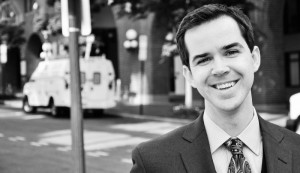 Thank you, Daniel. I have never seen so much mis-information and spin in the public square as I have the last few days over #boycottindiana. At least with the Ferguson protests there were people who were offering a narrative of what really happened and people who wanted to believe it were swept along by witnesses that turned out to be lying.

But with all the Religious Freedom Restoration Acts on the books no one has ever been refused a sandwich. There is no one with a story that turns out to be false. There simply are NO STORIES of these laws being used against gays and lesbians.

This is an important time to raise our voices for religious liberty, the essential liberty on which many of the American colonies were founded. But we need to do so with reason and respect and great tenderness to the GLTB community. Come learn more about this issue at the Engage the Culture Series here in Columbia.

This is about pluralism. Not prejudice. No Jainist should be forced to serve chicken wings.

Related posts:
About the Gay Bride and the Christian Photographer
What We Need To Know about the Hobby Lobby Decision and Our Religious Liberty

4 thoughts on “#boycottindiana and YOUR religious freedom: A lawyer who worked the Hobby Lobby case explains what’s really at stake”