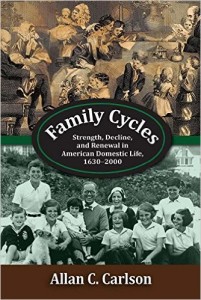 Many experts in today’s culture would have us believe that the nurturing of children and family relationships are not as important to our flourishing as individual fulfillment. And, as we pursue individual fulfillment, the changes to the family mean a march of social evolution toward freedom and happiness–being on “the right side of history.”

Despite the leftist lean of the social sciences over the last sixty years, the best research tells a different story.

Harvard’s longitudinal Grant study concludes that it’s not the triumph of freedom, or professional or material success, or fame or approval that brings the greatest happiness. Rather, good relationships bring the greatest richness and happiness to life.

Since our families provide our first and most important relationships in life, we can see how our potential for happiness is bound up in the strength of our families. Ironically, history and research actually shows us that as we yield our individual autonomy to the demands and responsibilities of nurturing good relationships in our families, we are actually doing more to secure our own happiness. 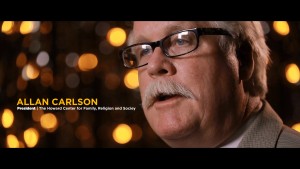 Allan Carlson, President of The Howard Center for Family, Religion & Society, makes the case that American families have not been evolving in an upward trajectory of freedom and happiness, but rather, “the overwhelming consensus of honest research in sociology, psychology, medicine, and even anthropology affirms that the natural family [with its deep and lasting relationships based on blood, marriage and adoption] enhances liberty and social order, creates wealth and well-being, and maximizes positive outcomes for children and adults alike. All alternatives produce lesser, or negative, results.”

The Howard Center has a database containing the abstracts of over 2000 peer-reviewed articles from the social sciences since 1985, which back up these conclusions.

Dr. Carlson was in Columbia Sunday night as the featured speaker for the Engaging the Culture series. In his comprehensive historical survey of the state of the American family he has discovered a pattern of fifty-year cycles of strength and decline that are unique to America. Two generations will see the family decline and then two generations will see its renewal.

The last cycle of strong families began in 1930 and lasted through 1970. Families have been in decline since then.

From his soon to be published book, Family Cycles: Strength, Decline, and Renewal in American Domestic Life, 1630-2000, Dr. Carlson discussed the factors that are common to family strength.

First, the dominance of the family-centered worldview. In the first cycle of family strength (1630-80) the Puritan colonies flourished far more than the Jamestown colony. In Puritan colonies land was granted to groups of families. They rejected the social power of individualism. The Puritan ideal focused on procreation and bearing children. The average Puritan family had nine children. The records of one community show that 90 families had 1043 children.

Another factor of family strength was property ownership. In the first strong cycle  land was plentiful and cheap. The average age of marriage for women was 18 and for men was 23. Almost all of the young couples were able to purchase their own land and set up their own individual housing which strengthened their family identity and commitment.

Strong American families have a history of strong family economies where each farm strove for self-sufficiency. The family also functioned as a school and partner with the church. Most Puritan girls had a high degree of literacy. Families also placed a high value on reading Scripture, prayer and discussing the sermon.

A strong middle class has strengthened American families. In the strong cycle from 1930-1970 the wage price controls, market forces, low influx of immigrants, and growth in manufacturing contributed to the strengthening of the middle class which was good for families.

During the same strong cycle family-centered public policy also strengthened the family. Pro-family laws such as the 1939 Social Security laws were passed that favored marriages and gave financial support for full-time mothers at home. To this day our Social Security laws provide for benefits to wives based on their own income or one half the income of their husbands, whichever is greater.

The government began to guarantee loans for homes, 98% of which were issued to young married couples. Income tax exemptions were granted to favor marriage and family. By the 60s, marriage rates and fertility rates soared. Interestingly the Democratic Party led the vanguard of these changes and was the champion of strong families.

Another factor that has strengthened families is gender role differentiation, where a man fulfilled the role of provider and protector and the woman fulfilled the role as nurturer and teacher, including spiritual nurturing. The strong influence of women and a soft patriarchy has also been good for families.

According to Dr. Carlson, the diminishment of these factors lies behind family decline: land and houses becoming harder to acquire, the family-centered economy giving way to the mass markets, the shrinking of the middle class, women turning toward alternatives to the home, a worldview devaluing family-centered life and religion (especially by men).

Our current cycle of family decline began in the 1970s. If the 50-year historical pattern repeats itself, is there hope that 2020 will bring a renewal of strong families?

Dr. Carlson believes that the United States has never been so hostile to families as it is now, especially in our courts and family policy. (This is another reason why religious freedom is so important…so that little communities of virtue can grow.)

Other trends associated with decline also seem firmly entrenched: the gender feminists and their demands for complete equality and the shrinkage of the middle class, to name two. We also have to reckon with the pervasive and destructive force of pornography on families.

But renewal will come, Dr. Carlson believes, from young people and from new prophets who come within religious communities. They will reattach themselves to the timeless messages because of the high cost of family breakdown.

For example, homeschooling is one of the hottest trends in education including some 2 million students, according to some experts. One of the main benefits families enjoy is the way it pulls the family together in a family enterprise, strengthening the family.

In a great social irony, those who value individual freedom at the expense of family have fewer children. Those that value strong families tend to have more children. How long will it be before the birth rate of the natural family enthusiasts begins to be felt in the American mainstream of cultural and political opinion? If demography is destiny then the false narrative of the inevitable evolution of the family may be naturally undone by its own values.

Both the Bible and the best research tell us that our greatest hope for happiness rests within the nurturing potential of the family. The more we hit the wall of broken families and suffer from all the unhappiness that each family dysfunction and crackup generates, the more motivation there will be to do what it takes to help families thrive. And the more people may realize that strong natural families are indeed on the right side of history.

With great appreciation for Dr. Carlson and the Engaging the Culture Series team

Do you find this outlook on the American family encouraging or discouraging? Please share your thoughts in the comments section below…

2 thoughts on “Is there a bright future for the American family?”