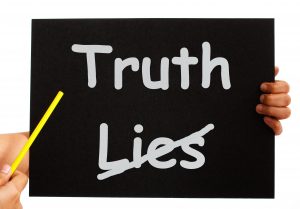 In this season of political hype and spin we hear accusations flying: “That is a lie.” ‘”That’s a — that’s — go to the — please, fact checkers, get to work.” Truth is taking a beating. And fact checkers are called on to establish the truth at a time when voters have less and less confidence that truth even exists.

What does it mean to claim to have the truth and how can we know if we have it? Can we trust the fact-checkers to hold the candidates to the truth?

First of all, what is truth–a thing or a relationship?

Truth is “telling it like it really is.” Truth is not a thing, but rather a relationship between our words or ideas and reality. This reality exists whether we can see it, whether we believe it, or whether our words agree with it.

“I was against the war in Iraq.” “I am against the Trans-Pacific Partnership.” “I will create thousands of new jobs.” Past, present or future–our words or ideas are true if they agree with reality. False if they do not correspond to the facts.

Philosophers call this the “correspondence theory of truth.” Deconstructionists doubt its usefulness because they don’t believe that objective reality can be reliably translated into words and sentences. Relativists believe that absolute truth is unknowable because we are limited by our own finite and fallible point of view.

But even those who reject correspondence theory admit there is a certain common sense correspondence between words and what counts for truth when you are giving directions to your house. If you live west off the highway but tell someone to turn east instead, they will probably wind up in the ditch.

In real life we can’t seem to get away from the correspondence theory of truth.
That’s because Jesus said “I am the truth.” Jesus’ thoughts, words and actions correspond not only to his own “faithful and true” character but also to the reality of his creation. While he does not give us exhaustive truth, and while we struggle to comprehend his depth and complexity, his words are “true truth”—never spoken merely to exercise power, but to show love. He is limited by his own character. He can never lie. When Jesus says, “I will be with you always,” and “I will come again for you,” his promises correspond to a future reality that will surely come.

In second Corinthians 4:2, Paul says we speak the truth “in the sight of God,” that is, we speak words that correspond to reality as God created it and as The One Who Sees Everything sees it. We don’t use words with private meanings. “Tell the boss I’m not ‘here.’”

Frederica Matthews Greene has said, “Reality is God’s home address.” To live with truth and integrity is to live before God in the reality he created and sees. To align our words as closely as possible to God’s objective reality.

In today’s culture we have many journalists who don’t really believe in an objective reality trying to determine whether candidates’ words are aligning with reality. It’s an exercise in hypocrisy. And their “fact checking’ can become another editorial or opinion piece. They can simply be expressing their judgment.

“Facts” can be cherry-picked and highly edited. People who accuse Donald Trump of supporting the war in Iraq focus on the first time he was asked the question (by Don Imus) when he responded “I guess so” and not the dozens of subsequent interviews where he was on record as being against it.

When Trump accuses Hillary of being for the Trans-Pacific Partnership he focuses on the 45 instances that CNN has tracked in which she supported the TPP, “including in 2012 when she called it the “gold standard” of trade deals. But facing a challenge to her left from Bernie Sanders, Clinton this year said she opposed it and would continue to as president.” Trump ignores her more recent flip-flop.

As James Taranta wrote in the Wall Street Journal, “Some good work is done under the rubric of “fact checking,” but the label is deceptive. Calling it “fact checking” is meant to convey an extra degree of objective authority, but “fact check” journalists do not limit themselves to questions of verifiable objective fact.

“Frequently they accuse politicians of dishonesty because the journalists favor a different interpretation of facts that are not in dispute. Sometimes their “rulings” are mere opinions on matters about which they do not know the facts, or that are not factual questions at all.”

Seeking the truth in this election cycle can be daunting. But we can check up on the fact checkers:
See if they are even-handed in the facts they are selecting to check. Their choices may be based on a particular agenda.
As with the Iraq War and TPP, see if they are checking the most recent facts.
According to Taranto, “Fact check” journalism, melding fact checking with bias and opinion, seems to be practiced most prominently by PolitiFact.com, FactCheck.org and the Washington Post’s Glenn Kessler. Snopes also has a decidedly liberal bias.

The best way to search out the truth is to admit we all come at it with our own perspective and bias. (Even scientists.) But that doesn’t mean we are all wobbly and relativistic about the truth. It means we dig up the facts and submit them to the analysis of a Christian worldview.

Get out of your media bubble. The media bias in this election cycle has been breathtaking. On both sides. Never has so much opinion been mixed into supposedly hard news. The anti-Trump bias in both The New York Times and Washington Post has been a declared intent. What matters most is not seeking the truth but getting the right person elected.

Conservatives who watch Fox News and listen to talk radio may think that they are gaining a great hearing, but their influence is dwarfed by the reach of the mainstream media. Every conservative news consumer should get a reality check from Matthew Sheffield’s article in National Review, “people who are ‘very conservative’ love right-wing media outlets. No one else appears to, not even Republicans who are ‘somewhat conservative.’

No matter our bias, we need to read news outside our bubble. It helps us see the bias on our side and know what facts to check out. I read The New York Times daily news digest, although usually not the board editorials. I especially appreciate the conservative editorialists David Brooks and Russ Douthat. The Atlantic offers very thoughtful analysis in longer think pieces. I also subscribe to World magazine and get a great deal of news from The Stream and Christianity Today online–all written from a Christian worldview.

God sees reality—both appearances and what’s going on in our hearts. Jesus promised that when the Spirit of truth comes he would lead us into truth. God has promised that if we lack wisdom he can provide it.

The best fact-checking, truth-searching is to do our homework and ask God’s Spirit to illuminate the truth, especially as we read and apply the Bible to the challenge of understanding today’s culture. And be willing to go wherever the evidence leads. In today’s whatever world, may we be men and women who seek and speak truth.

How do you recommend checking facts and seeking truth? Please respond in the comments below?