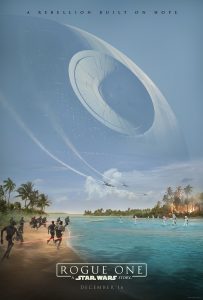 When we walked in the door from watching the new Rogue One Star Wars movie last night we heard the sad news: Distraught over her daughter, Carrie Fisher’s  death yesterday, Debbie Reynolds had just died of a stroke.

(Slight spoiler alert) We had just watched a digitally young Carrie Fisher/Princess Leia in the final scene of Rogue One. One of the rebels hands her electronic intelligence delivered at the cost of many lives. When he asked what she’s been given, she lights up a smile and answers, “Hope.” But in a tragic irony, yesterday sixty-year old Fisher died of cardiac arrest in the wake of years of the kind of drug abuse that damages your heart. Now, her elderly mama appears to have died from a broken heart.

In a 1990 interview with Larry King Carrie Fisher/Princess Leia said, ““One of the side effects of Percodan (a narcotic painkiller) is euphoria, and I thought that was a side effect that I could easily live with. Doesn’t matter that the rest of them that follow that are palpitations, heart attack and death. I couldn’t get over euphoria.”

“No parent should outlive their child,” my grandmother told me when her son, my 50-ish uncle died. I watched her suffer over his loss for years. Our hearts go out to this family which must endure this terrible, double loss.

In an interview with Oprah in 2011, Carrie and Debbie discussed their relationship. In her young adult years Carrie didn’t speak to her mother for ten years. For her part, Debbie thought there were times when she would lose Carrie to her drug addictions. After her daughter was diagnosed as manic-depressive (bi-polar), Debbie took on a much more protective role. “I wondered,” she said, “who will take care of her after I’m gone.” She was very proud of how Carrie had kept fighting for her health and sanity. Their hard-won older adult relationship seemed affectionate and genuine.

Through three divorces with men who betrayed her and her difficulties with Carrie, Debbie told Oprah’s audience that she made it through by giving her troubles to God and Jesus and seeking his counsel. Guideposts magazine reported that she relied on her faith to forgive Elizabeth Taylor for her affair with her first husband, Eddie Fisher.

Clearly her mother’s faith has impacted Carrie. In a recent November 28th Rolling Stone interview she was asked, “What are the important rules you live by?”

Carrie responded, “Be kind. Don’t hurt other people. It’s all the sort of Christian ethics stuff I thought was bullshit when I was a kid. No, it turns out it’s not bullshit. Tell the truth, be kind, all that corny stuff.”

Rolling Stone: “What’s the best advice you ever got?”

Rolling Stone: “Where did you learn that?”

Fisher: “A.A. They would say things like, ‘You don’t have to like it. You just have to go.’ I thought that was amazing. ‘Really? I can not like this? Well, great. I don’t like it.’ That took my back to … I hate the word ‘Christian,’ but again, that sort of ethic.”

On Oprah Carrie affirmed her deep love, respect and appreciation for her Mom. Debbie was famous not just as an actor and singer, but for her wholesome good-girl image. I can remember as a young girl being drawn to those qualities as she wistfully sang, “Wish I knew, if he knew what I’m thinking of…Tammy, Tammy Tammy’s in love.”

She tried to pass on her wisdom to Carrie, but Carrie found it hard to receive. When Rolling Stone asked her, “What advice do you wish someone had given you at age 19?” Carrie responded, “It was advice I couldn’t take: Don’t get loaded your whole f—ing life. And I did get loaded my whole f—ing life. You have to learn, and unfortunately it takes a lot of lessons for some of us to get it right.”

Like so many cultural icons and artists, Carrie has been celebrated as a rebel–a rebel princess. In the Rogue One movie the rebellion forces are fighting against terrible odds to survive. When they are losing heart another beautiful young rebel princess-type warrior rallies them, much as Princess Leia does, saying, “Rebellions are built on hope.”

Maybe that is why we all struggle to listen to our mothers. Why we wander into addictions, sex, drugs, rock and roll…we do it in hope. Hope that going our own way, reaching for the “euphoria” will bring us the happiness we think we’re missing by being Snow White or Tammy or Debbie Reynolds.

Being a rebel in today’s culture is usually seen as a good thing, which it very well can be. Rebellions from evil are noble, even if, as for so many Rogue One fighters, the rebellion ends badly. That noble sacrifice keeps hope alive and eventually the Empire is defeated. The movie was a thumbs-up addition to the Star Wars legend.

On the other hand, rebellions from what is good can be more costly than we ever imagine.

Both of these women have suffered much and persevered. We have no idea of how Debbie’s and Carrie’s stories ultimately end. God can redeem our worst rebellions. What we can ask ourselves is, Is what we’re hoping in something that will deliver “euphoria” or something seriously worthy of our hope? Something that can bear the load of our life? How many lessons and at what cost will we learn “to get it right?”

In this election year many have turned to politics in search of hope. And many are already deeply disappointed. As we listened to the Messiah this Christmas I was struck by the beautiful image of the lyrics from Isaiah, “And the government will be upon his shoulders.” What a relief to hope in the earthly rule of a wise and good king who can bear the load of each individual life and all our lives together..

Not only will he lead well, he will love well. His name shall be called, “Wonderful Counselor, Mighty God, Everlasting Father, the Prince of Peace.”

One thought on “The Tragic Irony of Star Wars Rogue One: The Princess of Hope dies, drug abuse a likely factor”