Suppose you wanted to know God and follow him. How might you get to know him? Where would you begin? Maybe you’d like to read what he said…500 years ago your only option would have been a Latin Bible. 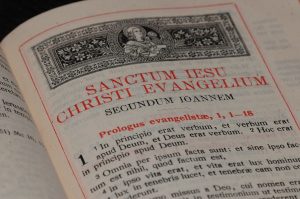 Maybe you’d like to go to church…500 years ago your only option would have been a Latin mass.

You could pray…but suppose you felt unworthy. You wanted to come before God but felt you needed to begin by confessing your sin to him. You would need to confess to a priest. Rather than merely listening to your confession, by the 1500’s confessors had been taught to quiz church members–asking them the details of their sin, especially sexual sin with others. Or alone.

Then the priest would assign you penance. You had to earn justification for sins you committed–praying the rosary so many times, giving alms, etc.

You would also need God’s grace dispensed through the sacraments by a priest. Not just confession and penance but through receiving communion at church, from the priest. Only he, the church taught, has the power to invoke into the bread the very body of Christ and invoke into the wine the very blood of Christ. But only he could drink the wine. You could not.

You’d also need infant baptism and confirmation and final absolution when you died. Then when you died you could expect hundreds, thousands or even millions of years in purgatory, where your soul would be purged from the blemishes of sin.
Then and only then could you hope to commune with a righteous and holy God and experience his presence and love for you.

If, like the Samaritan woman, you wanted the living water that Jesus offered, you had to get it through the Church and its army of priests.
They owned the reservoir and the pipes and dispensed it according to church law, church councils, and papal bulls. Not even priests were deeply versed in Scripture. They focused their studies more on Aristotle, Aquinas and the Scholastics.

This was Western Europe and the church of Martin Luther’s time.

Martin was brilliant. He was sent to the best schools by a father who wanted a lawyer to help with the family mining business.

But his brilliant mind was steered by an extraordinarily tender conscience. At University three friends had died from the plague. Was he thinking about death and salvation? For whatever reasons, while traveling through a thunderstorm, he was blown off his feet by a bolt of lightning. “St Anne, help me!” he cried out in spontaneous prayer, “I will become a monk.”

At a final dinner party he hosted for his friends he told them, “You will never see me again.” Then he entered an Augustinian monastery where he would begin theological studies to become a teacher.

Saying good-bye to his former life pained him deeply, but it also provided him the perfect opportunity to pursue the question that had been burning in his heart: How can we know if we’ve done enough penance, confessed enough, if God would welcome us into his heaven when we die? As a novitiate he was given a Bible and he poured himself into searching it for answers. At the end of his novitiate he had to give it back but continued his search in the library.

About life in the monastery he would later write, “We fasted and prayed repeatedly, wore hair shirts under woolen cowls…if ever a monk could get to heaven by his monkery it was I…If I had kept on any longer, I should have killed myself…I almost fasted myself to death, for again and again I went for three days without taking a drop of water or a morsel of food… I went every day to confession, but that was of no use to me.” “I could not believe that anything that I thought or did or prayed satisfied God.”

Chosen in 1510 by his Augustinian order to make a pilgrimage to Rome, Luther plunged into a veritable fountain of indulgences. An indulgence will diminish or eliminate the time a loved one or you yourself must spend in Purgatory. How does it work?

The Church taught that you are saved by the merit of Christ, but you had to merit the merit of Christ. A deficit of merit must be purged in Purgatory. They believed that Christ gave Peter keys to the kingdom that included the key to an infinite treasury of merits stored up by the good works of Christ and the saints. When you made a pilgrimage or venerated relics you could be granted an indulgence to credit the merits of the treasury to your or loved one in purgatory’s account.

Luther regretted that his parents could not be the beneficiaries of his pilgrimage, but he did it on behalf of his grandparents. Among many other acts he crawled up Pilate’s Sacred Steps in Church of the Lateran, praying an “Our Father” and kissing each step. This was supposed to free one soul from purgatory. He rose at the top of the stairs and wondered aloud, “Who knows whether this is true?”

For someone who was working so hard to get repentance right it’s no surprise that when a Dominican Friar came round to Germany selling indulgences (with no requirement of a true spirit of repentance), it would trigger a strong response from Luther. But here was the situation:

Pope Leo X, a Medici, an urbane patron of the arts, and also a suspected homosexual, needed money for St Peters and running a lavish Papal court. The German Archbishop of Mainz needed money to repay the Pope for the appointment of a second archbishopric, which was against canon law.

It was agreed that Tetsel would sell the indulgences with large percentages going to both the Pope and the archbishop. Tetsel, a master marketer who exaggerated their power to forgive sin and deliver souls from purgatory, claimed, “As soon as a coin in the coffer rings / the soul from purgatory springs.” 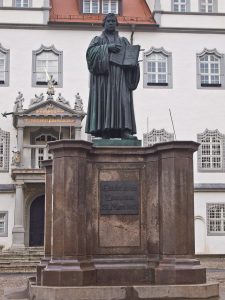 Luther did not intend to start a revolt or even a reformation, but on Oct 31st, 1517 he nailed 95 theses (points to debate) to the door of Wittenberg Castle Church. The document blasted Tetsel for fleecing his (Luther’s) parishoners and appealed to the Pope to rein him in.

In a great irony, none of the Wittenburg faculty came to debate them. But in early 1518 students had them translated into German and printed.

Within two weeks all the surrounding north German towns were discussing the Wittenberg professor of theology and his thinly veiled challenge to the Pope.

In my next post tomorrow you’ll discover God’s providence in what came next and many ways to thank him for the legacies of the Reformation that mean so much to us today.