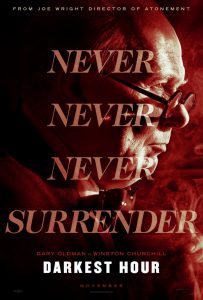 When the Christmas dust settles and it’s time for a holiday outing, Darkest Hour is that rare film that not only entertains but inspires. Yes, I laughed at the good comedic writing and delivery when my girlfriends drug me to Thor Ragnarok. But our culture offers so much cotton candy and not too many feasts of rich food.

Darkest Hour explores the life and death decision Winston Churchill faced as soon as he became prime minister: whether to negotiate for peace with Hitler and his formidable war machine or prepare to fight an enemy that was gobbling up more of Europe every day they deliberated.

Gary Oldham is the Meryl Streep of male actors–he totally disappears into his characters. Two hundred hours in the makeup chair for this movie and he IS Churchill. The campy villain of The Fifth Element has pretty much disappeared. Oldham plays Churchill with plenty of cheek and bravado, but also as the intellectually gifted statesman, Inspirer in Chief and grand master of the King’s English that he was. He may win an Academy Award for this performance.

Churchill must ultimately determine the fate of millions of his countrymen’s and his nation’s future existence.  We always think of him as the embodiment of Inspiration, but this account challenges us to consider this very human man’s dark night of the soul, jousting with doubt, opposed by half his war cabinet, pleading with Roosevelt for help to no avail.

In his lowest moments, when the fight against Hitler and those in his own government who want to negotiate for peace start to crack his resolve, his wife or his secretary or the people on the street, even the king help him double down yet again. To the opposition Churchill insisted, “When will the lesson be learned! You cannot reason with a tiger when your head is in its mouth!”

Each day brings terrible news as Belgium and the Netherlands surrender. No one believed that France would fall in a matter of weeks, but she did. And as she folded, over three hundred British soldiers, almost their entire fighting force, were trapped in Dunkirk, their backs against the sea. While Chamberlain and Halifax again press for negotiations, Churchill summons every civilian boat over 30 feet long to cross the channel and help evacuate the army. They desperately need cloud cover, lest the Luftwaffe pick them off like fish in a barrel. And God provides.

We tend to take the British victory for granted. But Darkest Hour reminds us that it really looked like Germany would quickly win the fight. It puts “courage” under the microscope and reminds us that individual decisions to do the hard thing, but the right thing, made day after day, change the course of history.

Curiously, the film did not open at our local mall theaters. We saw it downtown at our literary cinema. And it does focus on how Churchill’s ability to use words rallied the nation. One shot of Churchill thinking in front of a huge wall of books in his personal library vividly portrays how his mind and language flow from his study of other great minds and word weavers. But it is making its way into wider release as audiences give it high marks and spread the word. Trump pre-screened it in the White House and enjoyed it so much he invited other lawmakers to join him for a second showing.

It is indeed a movie to make conservatives cheer—the bold stand of a national leader willing to fight instead of appease the enemy. Not only a strong leader, but a very flawed one who ordered breakfast with a glass of bourbon and finished off a bottle of champagne at lunch and dinner. A man who battled the “black dog” of depression, as he called it, all his life. A man famous for using his sword of words to eviscerate not only the enemy but anyone, including the woman who challenged him at the dinner table, “Sir, you, are drunk.” “Yes,” he replied, “and you are ugly. But I shall be sober in the morning while you, madam, will still be ugly.” He would have been deadly on Twitter.

This portrayal of a complicated, heroic figure helps us understand that greatness does not wipe away our sins. Greatness shines forth in spite of them.  It proves that great men can be very, very flawed. And understanding them through the lens of the gospel we can see both the image of God and the destruction of sin and their need for forgiveness.

Churchill proves that great men can save civilization and still be very flawed. That we should still honor them in proportion to their contribution even if we deeply disagree with their views on, in Churchill’s case, race.

But the lesson seems lost on many. As today’s zero tolerance for historically racial sins spreads, I wonder if he will continued to be one of the most revered men in Britain. Here in America, especially among those in opposition to conservatives in general and Donald Trump in particular, I wonder if the movie will receive the credit it deserves.

Writing in the New York Times, film critic A.O. Wilson gives a grudging, tribute to the strengths of the film, but then concludes, “Churchill’s resolve, like the bravery of the soldiers, airmen and ordinary Britons in “Dunkirk,” is offered not as a rebuke to the current generation, but rather as a sop, an easy and complacent fantasy of Imperial gumption and national unity. Standing up to the Nazis, an undeniably brave and good thing to have done, is treated like a moral check that can be cashed in perpetuity. “Darkest Hour” is proud of its hero, proud of itself and proud to have come down on the right side of history nearly 80 years after the fact. It wants you to share that pride, and to claim a share of it. But we have nothing to be proud of.”

I cannot help but feel sad that this critic cannot appreciate the beauty of this film. The strength of Churchill. He sees the film as a “sop,” a conciliatory bribe to today’s audience who might appreciate a flawed leader who accomplishes objectively good things. How sad that he has “nothing to be proud of.” I do share in the pride of this movie and “claim a share of it.” I encourage you to see it. I think you will be too.