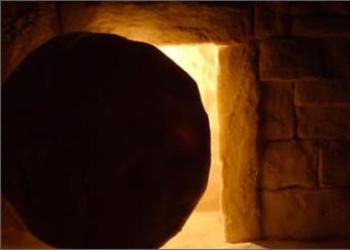 John’s mind raced. Mary’s words, tumbling and breathless, had shattered the pictures of pain that enveloped him. “An empty tomb…no guards in sight…” Peter’s footsteps fell farther behind.  He couldn’t hold up or slow down. He wiped his nose with his hand, his eyes with his sleeve.

His mind grasped at dangling threads of past conversations–“must suffer,” “three days”–and traced them into tangles of things to come. He picked at the tangles but could not unravel them. Around him the world moved in slow motion…yawning…stretching…stirring coals to life. Blinking faces started at the speed and intensity of the figure sprinting past.

From the hedge at the garden gate a rustle of wings took to flight. The path dipped down through the rows of grapevines, past the wine press. Around a final corner, the tomb, bathed in rosy light, matched Mary’s picture exactly. No stone. No guards.

John slowed, scanning the shadows for swords and helmets. The luxurious aroma of myrrh poured out of the dark rectangular opening. He paused and, bracing his hands on both sides of the doorway, leaned into the tomb, bending over, straining his eyes.

Where the body should have been lay only strips of unspooled linen. Some white, others stained–all clearly loaded with myrrh. The damp cold absorbed the heat radiating from his skin and the steam of his rasping breath. Gradually his breathing quieted. If he closed his eyes, the chaos of questions and images of slow death scraped his heart raw. If he opened them, the solid fact of the scene before him ignited a flicker of hope, a little flame that burned within the ache. He pulled back and leaned against the doorway.

Stumbling slightly and gasping, Peter shouldered past him into the tomb. Peter paused at the empty bier, surveying the perfumed pile of linen strips and the linen shroud. Farther into the darkness he halted again, seemingly riveted by something John could not see. John stepped in and drew beside Peter. The burial cloth that had been around Jesus’ head lay folded up on a ledge by itself, separate from the linen.

Peter turned toward him, his eyes liquid with wonder. He looked back at the burial cloth, turned slowly toward the doorway and left.

(From John 20 and Godsight: Renewing the Eyes of Our Hearts by Lael Arrington)

Happy Easter friends. He is risen!